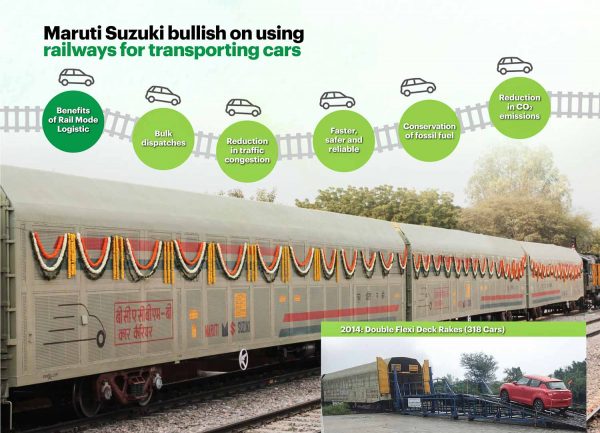 In FY 2019-20, over 1.78 lakh Maruti Suzuki cars were dispatched by rail mode, at 15 percent increase over the previous FY, and accounted for about 12 percent of total company sales

RDSO then developed a new design Auto-wagon called BCACBM. BCACBM rakes were more flexible as all models could be accommodated, and capacity increased by 20 percent from 265 cars to 318 cars. In terms of transport, the rakes are designed to be operated at 95 km/hr, speed limit, the highest for any goods train in India. Until now, 27 high capacity BCACM rakes have been inducted for dispatch of Maruti Suzuki cars.

Kenichi Ayukawa, Managing Director & CEO, Maruti Suzuki India said, “Considering the increasing volumes, our team felt the need for large scale logistics flow. We realised, that not only for expansion but also for risk mitigation we have to look beyond road mode logistics.”

Maruti Suzuki operated the largest sales and service network in the country, and sells the most number of cars each year. Its large sales volume depends on timely dispatches, and fulfilment of order-books. This in turn justifies MSIL’s dependence on railway transport.