Maruti Swift, one of the best selling cars in India, is now in its third generation. This does create an issue with some buyers, who do not like their cars to look like others. But with thousands of Swift sold every month, this is but expected.

To solve this problem, alongwith launching the new gen Swift, Maruti also introduced the iCreate personalization package for Swift. Before Swift, it was already on offer with Vitara Brezza and Ignis. But the iCreate option, does not offer a proper mod job. For Maruti Swift fans, who want more than iCreate, they still have to rely on aftermarket specialists, or in some cases, like in the one below, authorised Maruti dealers. 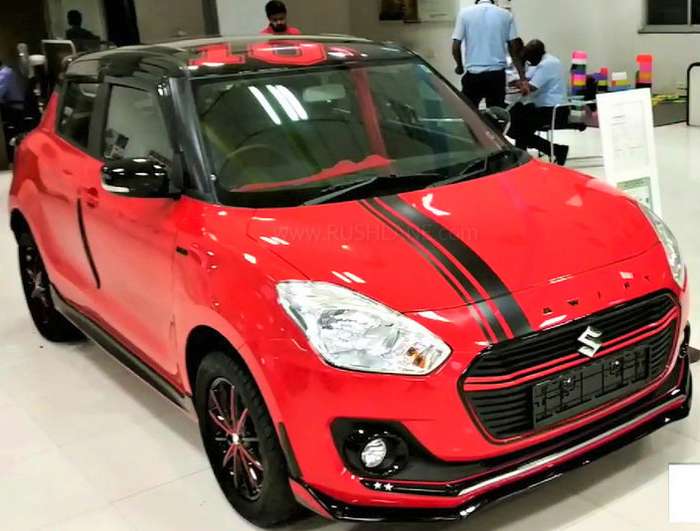 A Maruti authorized dealer showcased a modified Swift inside company showroom. It is called Swift Sport Exclusive A+ edition. It is in a way inspired by the Suzuki Swift Sport, which is on sale outside in India. With the launch of new gen Swift, there were reports that Maruti will launch the more powerful 140 PS variant of Swift Sport here in India. But that has not happened.Yet.

This mod-job is likely for those Swift fans, who wanted to buy the Sport edition in India. Though it does not come with performance like Swift Sport, it does try to look like one. 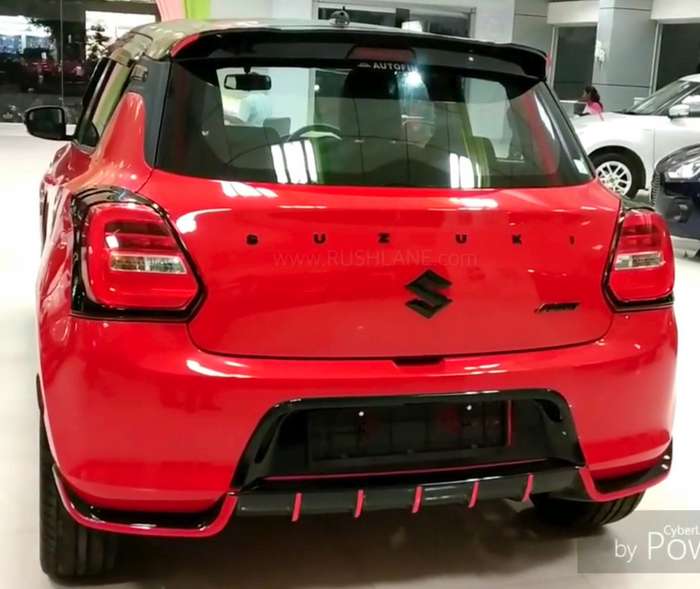 The dealer mod features vinyl wrapping, decals, body kits, new alloys, Yokohama low profile tyres, updated interiors to match the exterior styling, etc. In the front, grille has been finished in all black, with red accents and Suzuki logo in the centre.

The car is finished in bright red. It has stripes in black on the bonnet. The roof is finished in shiny black, with a no ’10’ finish, similar to Swift Deca edition. All the pillars are finished in black, making the car look even more sporty.

New Swift is based on the Heartect platform, thus making it lighter than its earlier counterpart. It receives a new interior design with a large touchscreen infotainment system and climate control. Safety features include dual airbags, and ABS with EBD, which are offered as standard.