JD Power released 2018 India Initial Quality Study (IQS) which took into account car owner’s experiences in the first 2 to 6 months of ownership. The study spanned responses from 7,710 new car owners who had purchased their cars during the period December 2017 to October 2018. This study included vehicles in all categories across 75 models from 13 automakers.

JD Power IQS studied buyer’s responses to over 200 problems in 8 categories in terms of engine/transmission, heating, ventilation and cooling, driving experience, exterior features, interiors, controls and display and entertainment and navigation. Each of these problems was assessed on the basis of number of problems per 100 cars – PP100. A lower PP100 showed lower problems faced by owners resulting in higher quality of the car in question.

Entry Compact Segment – Taking into account cars in the entry compact segment, it was found that the Maruti Alto (77 PP100) ranks highest. The Hyundai Eon, though discontinued, scored 83 PP100 with an average in this segment at 92 PP100.

Compact Segment – The topper in this segment was the Maruti Suzuki WagonR with a scoring of 72PP100 followed by the Maruti Suzuki Celerio at 82PP100. It is the old WagonR that was assessed here and not the recently launched model. 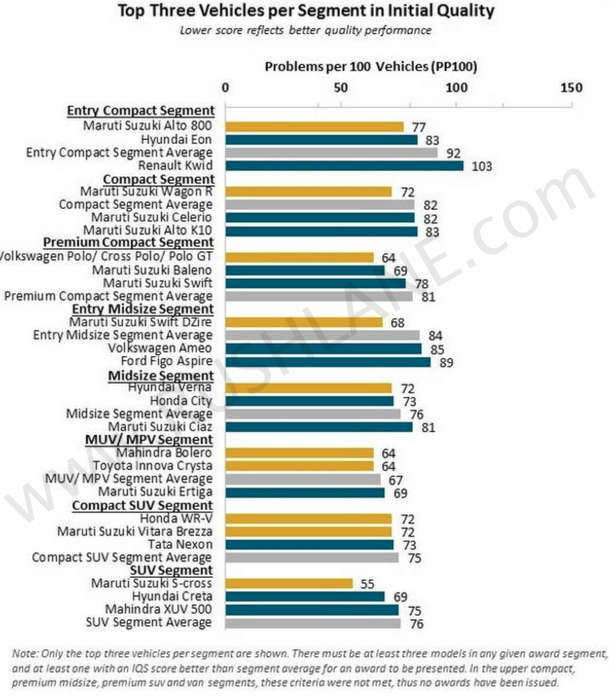 Premium Compact Hatchback Segment – In the premium compact hatchback segment, Volkswagen Polo scored highest with 64PP100 while the Maruti Baleno received rating of 69PP100 with the average standing at 81PP100. Again, it was the older Baleno that was assessed and not the facelift model.

Midsize C Segment Sedans – Hyundai Verna was in a top position in this segment with 72PP100 with the Honda City coming in next with a 73PP100 score. In this segment the average score was 76PP100 which was higher than both the Verna and City.

MUV/MPV Segment – Here there was a tie between the Mahindra Bolero and the Toyota Innova Crysta as both these models received scores of 64PP100. The average score here stood at 67PP100. Though the Bolero and Innova Crysta were tied, the two MPVs target different segments as the Innova Crysta is priced much higher than the Bolero.

Compact SUV Segment – This is a leading segment in India with most buyers opting for models in the sub 4 meter category. The Honda WR-V and the Maruti Suzuki Vitara Brezza tied in this segment with score of 72PP100. Average score was at 75PP100 which was higher than that seen on both the segment leaders.

SUV Segment – Maruti S-Cross scored the highest in this segment with 55PP100 followed by the Hyundai Creta at 69PP100 with average score in this category at 76PP100.

The study also took into account diesel cars versus petrol cars; higher displacement engines versus smaller capacity engines. Here it was seen that owners of diesel engine cars reported fewer problems as compared to owners of petrol engined cars with scoring of 77PP100 as against 82PP100 respectively. Cars with smaller engine capacities however noted increased problems as compared to vehicles with higher capacity engines; scoring 86PP100 for larger capacity engines as against 75PP100 for smaller capacity engine. There were very few problems noted in regard to audio, entertainment and navigation though buyers noted some issues with ease of Bluetooth mobile phone pairing and use of navigation controls.