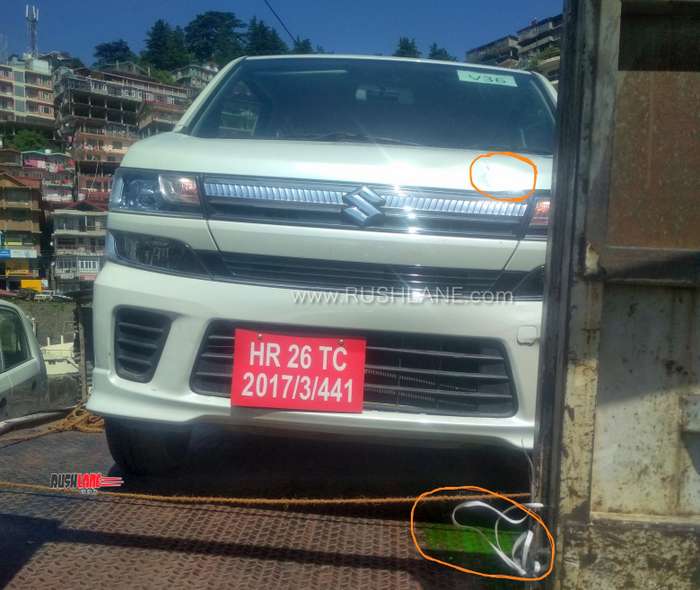 There are a total of 50 prototypes of the Maruti WagonR electric being testing across India. These test mules are not camouflaged, instead they wear the Maruti Suzuki Electric Vehicle livery. All are finished in white, with Blue decals of EV. These test cars of WagonR Electric have been spied in busy cities of Delhi, Mumbai, Bangalore, etc on most occasions.

This is because EVs are aimed at a target audience which mostly resides in urban cities. Testing in cities will provide the company with related data which will help them tune the car better for their target audience. But being a Maruti electric car, WagonR electric is expected to find buyers from all regions, including rural and hilly areas.

This is why the WagonR electric test mules are spotted Shimla. This is the second time a WagonR electric test mule has been spotted in the region. Last time it was spotted in October 2018, in Kufri, when it was being tested in sub temperatures in the snow. This time though, the car was parked on a recovery van. Hat tip to automotive enthusiast Parveen Kumar for sharing the images.

Maruti WagonR Electric is poised for launch in India sometime in early 2020, after it makes its debut at the Auto Expo in February. Spy pics reveal distinctive styling. It has been seen with a two part front grille, a new front bumper with LED headlamps, door mounted wing mirrors, vertically stacked LED tail lamps. The actual car which will be launching, will be different in design. It will be based on the Heartect platform, which is also the basis of other Maruti cars like Swift, Dzire, Ignis, Baleno. Its interiors will be similar in design to the recently launched WagonR petrol variant. It will receive airbags, ABS, EBD, rear parking sensors, seat belt alert and speed alert system.

Maruti Suzuki WagonR electric could come in powered by a 72 volt system with 10-25 kWh battery pack. It will be capable of a maximum range of 150 kms on a single charge. These test models are developed at the Suzuki headquarters in Japan, and are now getting tuned for Indian conditions. The new WagonR electric vehicle might also get a fast charging feature to offer convenience to the customers. Suzuki is also setting up a car battery plant in India in association with Toshiba and Denso with investment of Rs.1,137 crores.

Once launched, the WagonR electric could be produced at the company plant in Gujarat. Local production will mean aggressive pricing. Maruti has said that it could be priced in the region of Rs 12 lakhs. The Maruti Suzuki WagonR electric was showcased at the MOVE 2018 Summit last year. It may come in under a different name or could continue with the WagonR badging.

This initiative comes at a time when the Indian Government is targeting 15 percent new vehicle sales to come in from electric and vehicles running on alternative fuels. This is a part of the Government endeavour to drastically reduce emissions and lower oil import costs. Maruti will discontinue sales of all diesel cars from their line-up and focus only on petrol, hybrid, CNG and electric technology in the future. They plan to sell 15 lakh electric cars in India annually by 2030.