At the 2018 MOVE summit, Maruti had displayed the 2020 Maruti WagonR Electric, which is expected to make its Indian market debut in 2020 as Maruti’s first EV. Recently, the company had flagged off a large-scale testing of these EVs in which 50 units will be used to collect data regarding vehicle’s performance and behavior in Indian conditions.

One of the 50 prototypes was recently spotted testing on the Delhi-Jaipur Expressway by automotive enthusiast Rickey Dalbehera. The car on test didn’t sport any camouflage and instead had prominent ‘Electric Vehicle’ branding. This could be a good strategy by Maruti to increase awareness & interest of the masses towards Electric Vehicles. 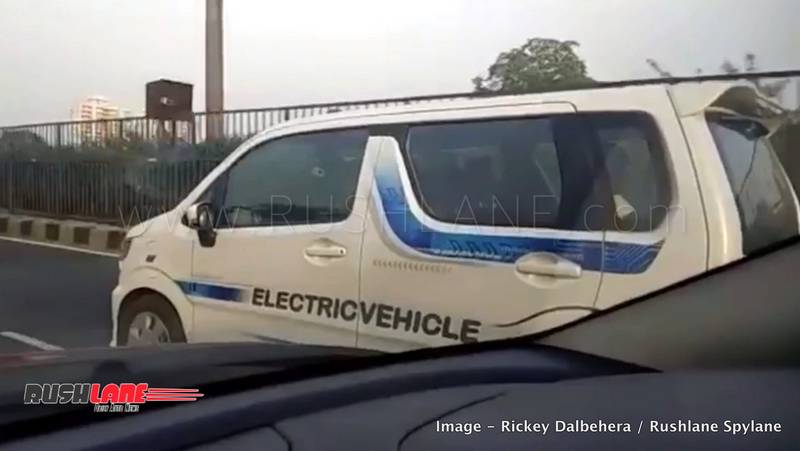 The prototypes on test are based on the JDM WagonR, which is on sale in Japan. However, these 50 test units have been assembled in India at MSIL’s Gurugram factory. The testing shall help Maruti to get insights regarding how these EVs behave in Indian road conditions and figure out an optimum range, before it launches these EVs in the market.

The 2020 Maruti WagonR Electric is based upon the HEARTECT platform, which also underpins the current generation Baleno, Dzire and Swift. The platform will help WagonR meet the Indian crash test norms which are scheduled to be introduced in October 2019. Watch the video of new WagonR electric on test in video below.

Currently, it is just Mahindra and Tata Motors who provide electric vehicles in India, and even Tata Motors is yet to start catering to regular customers. Hyundai Motors is expected to bring in the Kona EV later next year which would serve as the first full-sized electric SUV in the country.

Maruti has confirmed that it too will join the EV space, albeit in 2020. The first electric model from the manufacturer is expected to be an electric WagonR. Maruti Suzuki will most likely be using its Gujrat plant to make its own-battery packs, and potentially reduce costs as the battery packs are a major cost contributor in EVs. Additionally, Maruti shall be getting help with its EV strategy from its global partner, Toyota, which is an expert in EV & hybrid technology space.