What could you possibly do with a 20-year old car that you can no longer use legally or sell due to NGT rules applicable in Delhi-NCR?

Scrap it right? That could have been an option, but for brothers Raghav and Rohan, their love for their car prompted them to come up with an entirely new idea. As the car was no longer street legal in Delhi-NCR, the brothers decided to convert it into a full-size sleeping bed.

Story behind the idea

It all began when Raghav and his team were working on a project at a remote location in Haryana. To ferry manpower and tools, they purchased a 1998 model Zen. The car proved to be a reliable asset, as it covered around 57k kilometres without any major issues. After the project was completed by mid-2019, the car was brought to their New Delhi office.

The car was still in decent condition and gave a mileage of around 13-14 km/l. However, when Raghav used to drive the car near to his home, he realized that repairs were needed for the steering and brakes. The old Zen was eventually parked in a corner, where it remained for a few months. Then one day, Raghav’s younger brother Rohan came up with the idea of removing the car’s engine and using it as a generator. 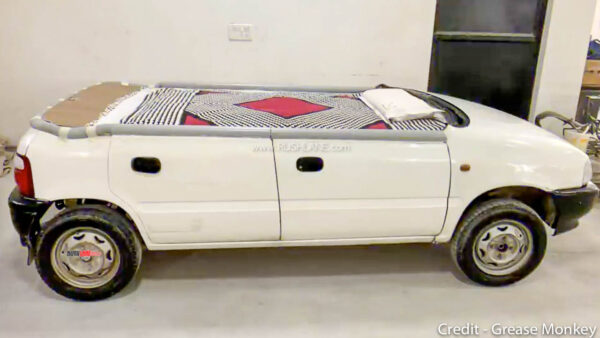 As the idea looked promising, the brothers brought the car to the factory and started the dismantling process. The engine was removed along with the transmission and fuel tank and mounted onto a custom built trolley. All that was needed now was to connect the engine to an alternator, which would then generate electricity. However, this plan could not be executed, as Covid-19 lockdown was imposed. The entire project had to be postponed indefinitely.

However, as Raghav often used to see the engineless Zen, he came up with a unique up-cycling idea to convert the car into a sleeping bed. His brother Rohan was thrilled with the new idea and decided to handle the execution part of the project.

As work progressed, a number of changes were carried out on the car to transform it into a sleeping bed. Key changes included repairs to the rusting chassis; removal of windshield, roof and front & rear seats; re-fitment of doors, bonnet and bumper; and installation of headlights. After this, the bed frame was installed using metal beams. Next, the boot was welded to the car and a flap-type door was provided to access the boot space. The doors are also functional and they open to provide access to under-bed storage space.

Next, a sheet of plywood was placed on the bed frame and secured there with screws. The sharp edges of the car were sanded off and covered with PVC pipes for a refined look. In the final step, a mattress was placed to mark the completion of this project. As for the generator project, that too is expected to be completed in the coming months.