After the launch of AMG GT R and AMG C 63 Coupe, Mercedes Benz has launched another Coupe, in the form of AMG GLE 53

India’s leading luxury car brand, Mercedes Benz has launched the AMG GLE 53 4matic+ Coupe today, at a starting price of Rs 1.2 cr. This is the first from the family of 53 of the AMG lineup to be launched in India. Bookings of this Coupe had already opened, from September 8.

The GLE 53 Coupe is the direct successor of the AMG GLE 43 Coupe which was on sale in India from 2016 to early this year. The GLE 43 Coupe was powered by a V6 3.0-litre turbo petrol engine which produced 365 bhp. The latest GLE 53 Coupe is also powered by a V6 3.0-litre petrol unit but this time with twin turbochargers which kicks out a power of 435 bhp and 520 Nm of peak torque. This unit will be coupled with a 9-speed AMG speed shift automatic transmission as standard.

Power will be sent to all the four wheels with the help of the German carmaker’s all-wheel drive setup- 4Matic Plus. A 48-volt mild-hybrid setup- called EQ Boost, will also be offered which will add up to 22 bhp of power and 250 Nm of additional torque on demand. The car is claimed to breach the 0-100 kmph mark in just 5.3 seconds while the top speed has been electronically limited to 250 kmph.

When it comes to exterior design, the Coupe resembles its standard SUV sibling barring the vertical slat AMG-spec grille. However, differences are more prominent at the side with the sloping roofline and the long rear overhang. It stands on standard 20-inch alloy wheels. There are some AMG specific additions that enhance the sportiness like the side skirts, spoiler and twin tailpipe exhaust. 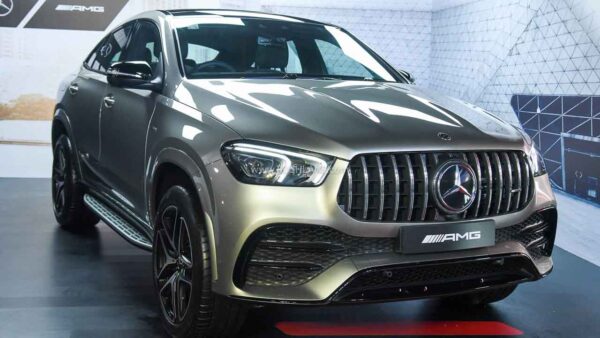 The cabin gets a 12.3-inch digital instrument cluster in addition to the 12.3-inch touchscreen infotainment system compatible with the latest MBUX. AMG touches are found on the steering wheel, seats, pedals and carbon fibre inserts in the doors and dashboard.

Santosh Iyer, Vice-President, Sales & Marketing, Mercedes-Benz India commented, “The launch of the AMG GLE 53 4MATIC+ Coupé is a strategic decision aimed at strengthening our AMG portfolio by introducing the much awaited ‘AMG 53 series’ in India. The AMG portfolio is one of the fastest growing segments for us and the addition of the ’53 series’ will further popularize the segment.”