Yesterday, a tweet from Sandhya Menon was copied in entirety and shared on whatsapp with a link to her tweet, alongwith screenshots of the long message she’s uploaded. It reads as follows – ‘On Suresh Rangarajan, Head of Corp Comm, Tata Motors. I’m just so sad that young women still go through this every day’.

The write up chronicles multiple occasions where different women have had to put up with behaviour that’s not normal or acceptable. One response to the tweet, by @Reva_Malhotra reads as follows – “@TheRestlessQuil Thank you for bringing this up, his weird, messages and lecherous comment in the garb of a job offer has been directed towards #metoo”. Another response from Farah Bookwala Vhora, Sr. Correspondent, CNBCTV-18, (@FBookwala) read – “He’d made me so uncomfortable that I would detest having to call him for interview requests or company responses to stories, let alone meeting him for relationship-building exercises.” Farah has also agreed to help Tata Motors with the investigation, if needed. 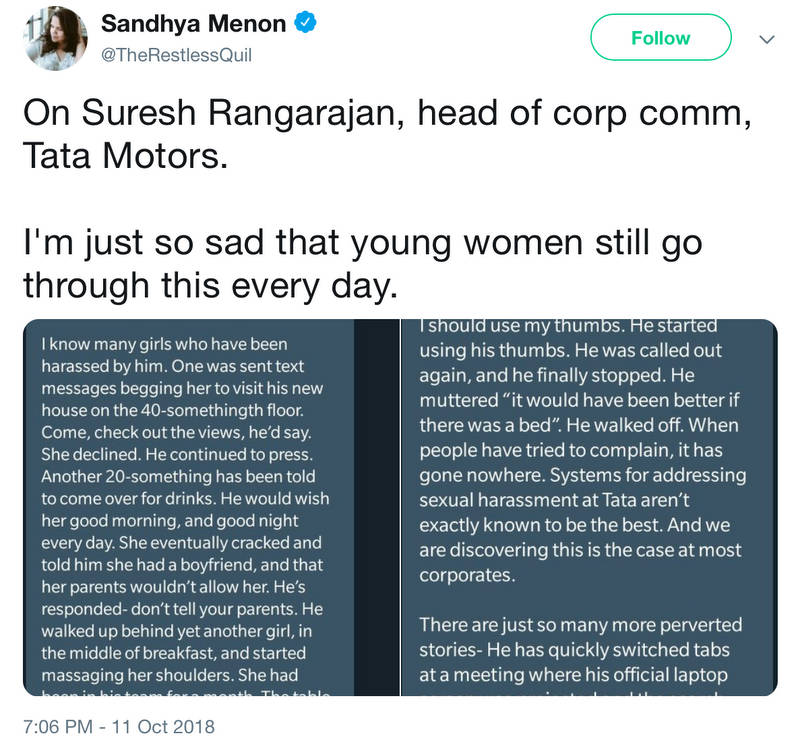 A query regarding the Menon’s tweet, elicited the following response from Tata Motors HR – “At Tata Motors, we have always striven to ensure a respectful and safe workplace for everyone. Any allegations are investigated and appropriate action is taken immediately. This matter has already been taken up for investigation by the Internal Complaints Committee, set up as per law. Any such behaviour is against the Tata code of conduct and appropriate action will be taken as soon the enquiry is completed.”

Tata Motors has also tweeted the above response, and followed it up with another tweet – ‘In light of the enquiry by ICC, Suresh Rangarajan, has been asked to proceed on leave in order to allow for an objective enquiry to be completed as swiftly as possible.’

This is of course protocol, a norm that’s followed in such instances. This is also a moment of realisation. #MeToo, auto Industry and Tata Motors in a single sentence. The sheer number of incidents related to sexual misconduct, and harassment being recounted on social media is at the very least, frightening, shocking, and sad. And that’s just an English speaking corporate India trying to speak up on social media. It’s not difficult to fathom that fear and stigma may prevent a vulnerable individual from reporting an incident rightaway, or ever. It’s not easy.

This week has borne testimony to countless women sharing an account of what they have endured at the workplace. As a result people are coming together to create a network of therapists and lawyers to help those who’ve experienced such trauma. For those seeking help from Indian government’s National Commission for Women, women are needed to prepare written complaints, and this entails lodging formal complaints. At the workplace, an Internal Complaints Committee takes charge.

Being in no position to cast aspersions, or draw any conclusion/judgement, I do hope Tata Motors does all that’s necessary to bring this matter to a close. Sexual Harassment of Women at Workplace (Prevention, Prohibition and Redressal) Act, 2013 is real. It encourages employers to be vigilant and responsible, and enforce the writ word.

This is a developing story.