MG Gloster will be powered by a 2.0-litre bi-turbo diesel engine mated to an automatic transmission

While the growing trend in SUVs has been largely due to the demand for compact and subcompact SUVs, premium full-size SUVs continue to hold their charm. There aren’t many offerings as of now in the full-size SUV segment with only- Toyota Fortuner, Ford Endeavour and Mahindra Alturas G4. The rest of the full-size SUVs belong to the luxury category and belong to a segment above.

However, only Fortuner and Endeavour have been able to gain people’s appreciation and love whereas the Alturas G4 despite being a solid product, has not been able to garner the required attention. The segment also consists of Isuzu MUX which hasn’t yet received its BS6 update and has not been a fan favourite either from the beginning. A new addition, just above this segment of Fortuner and Endy, is expected to make things more interesting.

MG Motor is all set to launch its full-size premium SUV Gloster in the next few weeks. This will be the fourth offering from the British car manufacturer in India after Hector, ZS EV and the recently launched Hector Plus. Recently, the automaker also launched a teaser in which it shows the production-spec Gloster and highlights some of its features.

As we already know, MG Gloster is a rebadged version of Maxus D90 which is manufactured by Chinese automaker SAIC, the parent company of MG Motor. The SUV is built on a ladder on frame chassis and its huge size gives it bold and intimidating looks. It measures 5005 mm in length, 1,932 mm in width and 1,875 mm in height. These figures make it bigger than the rest of its compatriots in this segment.

When it comes to design, it features the signature octagonal MG badging on the octagonal grille at front complemented by sleek LED projector headlamps with integrated LED DRLs and a muscular bonnet. It also gets LED tail lamps at rear and 19-inch multi-spoke alloy wheels with a silver-grey colour scheme. 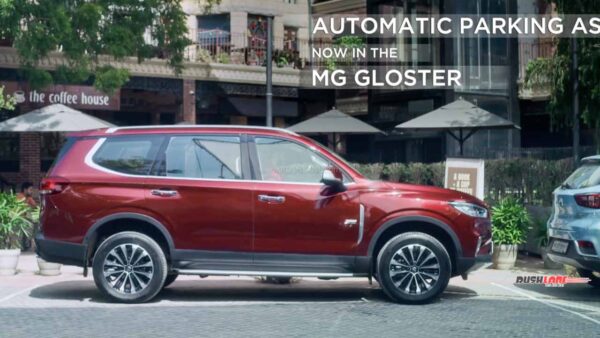 At the interiors, what is revealed from the video, we can expect the best of material to be used considering the premium offering. The features on offer will also be a long list which will consist of a large 12.3-inch touchscreen system, which unlike the Hector, is horizontal. It also comes with an i-Smart suite which offers over 50 connectivity features. It also gets a parking assist.

MG will only offer a diesel engine with the Gloster which is indigenously developed. It will be powered by a 2.0-litre twin-turbo diesel engine which will crank 215 bhp and 480 Nm of peak torque. There are no official details about it but this unit is expected to be mated to an automatic transmission only. An AWD setup will be offered as standard. The Maxus D90 is also offered with a 2.0-litre turbocharged petrol engine in China which is not likely to be offered in the Indian version.

MG Motor is expected to launch its flagship offering sometime next month to cash in on the upcoming festive season. Since it will be a CKD product, it will be dearer than its rivals. Prices of the new SUV is expected to fall between Rs 40-45 lakh (ex-showroom).