MG Gloster and Toyota Fortuner parked side by side – Size compared

MG is readying itself to launch the Gloster in India. While the launch might still be a few days away, Gloster has been officially been revealed and has also arrived at select dealerships. In fact, MG has already conducted the Media Drive of the Gloster and multiple comparative videos of the Gloster vs the competition are also available on the internet.

As the Gloster is a full sized SUV, invariably it gets compared with the likes of Ford Endeavor and Toyota Fortuner, which are the current best-sellers in the segment. In a new video uploaded by MyCarHelpline on their YT channel, the team has done a size comparison between the Gloster and Fortuner.

From the video, one thing is clear that the Gloster looks huge, when standing next to a Toyota Fortuner – which itself is a huge SUV when seen on Indian roads. This gives a basic idea as to how huge the MG Gloster really is. 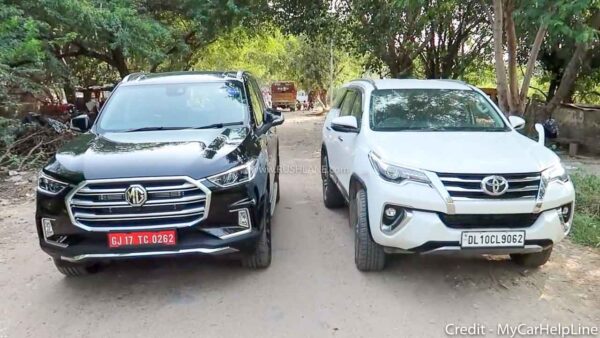 In India, the Fortuner has been ruling the full-sized SUV segment for years. Even the previous version of the Fortuner used to be the segment topper. However, MG might want to change things around. Upon launch, the Gloster will land up becoming the largest, tallest, longest, and the widest car in its segment.

While the Fortuner itself is an imposing vehicle to look at, surprisingly, the Gloster manages to make the Fortuner look like a dwarf (comparatively). This could work out to be a key decision making factor for individuals who love to have a dominating presence on the roads (or in someone’s rear view mirror).

On the features front, like other MG vehicles, the Gloster will be a heavily loaded with tech and features. It will come along with features like ventilated seats with massage function for the driver, 3-zone climate control, a large panoramic sunroof, a 4WD transmission set-up, large touchscreen infotainment unit, multiple drive modes, lane keep assist, adaptive cruise control, automatic emergency braking and much more. The cabin of the Gloster too looks premium with the brown leather upholstery and brushed aluminum inserts.

Under the hood, customers will get a 2 litre twin turbo diesel motor for top variants and turbo motor for entry variants. The former will be able to dish out 218 hp and 480 Nm of max torque, while the latter will dish out 163 PS and 375 Nm. Transmission is taken care by an 8 speed AT on all Gloster variants.

Post the Gloster, MG intends to continue with its SUV onslaught in the country. After launching 4 SUVs, back to back (Hector, ZS EV, Hector Plus and Gloster), MG intends to bring in the petrol-powered ZS for the Indian market. The crossover will be pitched against products like the Seltos and Creta, which have currently been leading the charts in their category. With the launch of the ZS, MG’s overall share in the Indian market could go up as the mid-sized compact SUV segment in India has a sizeable set of buyers.