For MG Hector, the first year of business in India has been smooth sailing. And to celebrate this stellar sales response, the auto manufacturer has now introduced Hector Special Anniversary Edition. This comes in at a price of Rs 13,63,800 for the petrol variant, and Rs 14,99,800 for diesel. Both are ex-sh prices.

MG Hector Special Anniversary Edition is based on the Super trim. It includes a range of new features that add to its celebratory spunk. This includes wireless mobile charging, 26.4 cm (10.3 inch) HD touch screen, air purifier and Medklinn Kit for interior sterilization. The latter being a new way of adapting to the current day world and is a certified anti-virus in car device.

The features are the crux of this edition. In essence, MG Hector Special Anniversary Edition is a Super trim; with the addition 4 features of Medklinn certified anti virus in car device, car air purifier and wireless mobile charger, free of charge for customers. All these features come free of charge, as the price of Hector Anniversary Edition is same as that of the Hector Super trim. 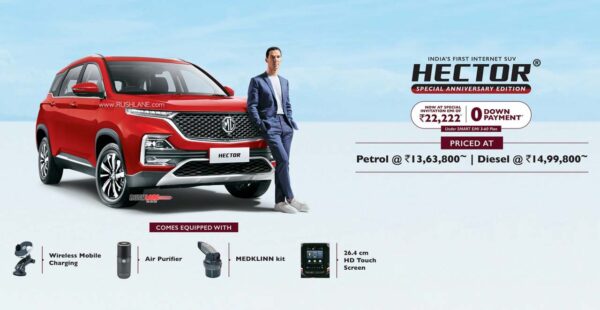 Speaking about Hector, being a connected car from the beginning, there’s rather little that customers are wanting for in the tech front. On the finance front, one can avail of special invitation EMI of Rs 22,222, and 0 down payment under smart EMI 3-60 plan.

With sales getting underway in July 2019, by the end of July 2020, the manufacturer had sold over 26k Hector SUVs in India. This makes Hector best selling car in the segment with over 50% market share. Interestingly, Hector anniversary edition launch coincides with the recently launched Harrier XT+ trim. Tata is now offering Harrier with panoramic sunroof feature at an even lower price than before, thanks to this new variant launch.

Until a weeks back, Hector was MG’s flagship SUV in India. But now, it is the MG Hector Plus, which was introduced in July 2020. Hector Plus price has now been revised following an introductory offer period for first buyers. Having called in reinforcements in the form of MG Hector Plus, the automaker now meets segments needs even more triumphantly, ensuring it has a 5-seat, and 6-seat car. And a 7-seat option may not be too far away.

This further enhances segment dominance. As with current sales trends, MoM sales growth is a norm. MG Motor has not only achieved expected growth but has done better than segment rivals in YTD FY21 sales. The company would now be intent on improving sales to above 3k units a month, where it looked to be comfortably seated towards the end of last year, if not, to better it.

Considering MG’s participation in a solitary segment, it’s essential for the company to lead from the front to remain profitable, and viable in the domestic front. At a time, Jeep Compass was in a similar position but brand sales fave fallen to below 1,000 units per month, and in recent months, below 500 units.

Apart from it’s market lead in the SUV segment, MG ZS EV too is sold here. Being in a segment that’s largely unexplored and inaccessible to many, MG’s performance in the segment will help boost not only company sales, but contribute to overall EV adaption in the country. In a few weeks, MG will launch Gloster – their biggest and most expensive car for India.