The Indonesian sibling of MG Hector, Wuling Almaz, has received a new top-end trim called RS which stands for ‘Rising Star’. A few days earlier, the company had revealed the SUV in its final production-spec avatar with all upgrades and new features on offer.

The carmaker has now officially launched Almaz RS in Indonesia at a starting price of IDR 350,800,000 (equivalent to INR 17.73 lakh). Wuling brand is jointly co-owned by China’s premier auto company SAIC and America’s General Motors while Almaz (Hector) is retailed with different names at various parts across the world.

The most prominent inclusion in the new RS trim of Almaz is WISE (Wuling Interconnected Smart Eco-system), which is the company’s lingo for ADAS (Advanced Driver Assistance System) and connectivity features.

Almaz RS is also loaded with connected tech features such as remote vehicle control using a smartphone, voice activated commands, vehicle positioning, geo-fencing, Bluetooth Key and much more. Other creature comforts offered in the RS trim are an upgraded tablet-sized touchscreen infotainment unit, wireless smartphone charging and new steering-mounted control buttons. All these features are in addition to the tech available in the lower-spec variants.

Differences between the RS trim and the standard Almaz are not only limited to functionality but also in their looks. The RS variant distinguished itself from the regular trims with the use of blacked-out elements in place of chrome. These include all-black components such as roof, pillars, wing mirrors and a black grille with RS badge.

The fog lamp housings and lower air dams are completely blacked-out while a red stripe runs across the bumper that accentuates its sporty appeal. It retains the usual split headlamp setup with slim DRLs flanked by the grille at the top and projector LED headlights beneath. It rides on 17-inch dual-tone alloy wheels while interiors have also been carried forward from the regular model. 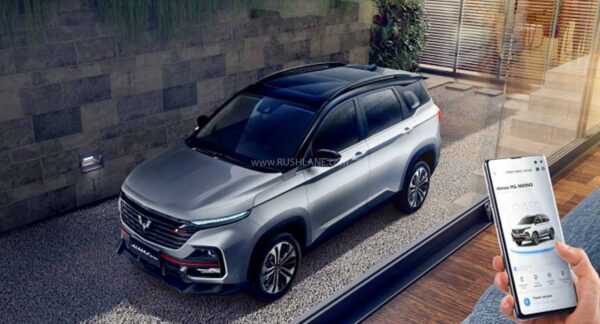 Wuling Almaz RS, like the rest of the lineup, is only offered with a 1.5-litre turbocharged petrol engine that kicks out 140 bhp and 250 Nm of peak torque. Power is sent to the front wheels either by a 6-speed manual or a CVT automatic gearbox. In Indonesia, Almaz RS is retailed in three derivatives- EX (5-seater), EX (7-seater) and Pro.

A few weeks ago, a test mule of MG Hector was spotted again which led to speculations of a new variant in the lineup. The new variant of Hector in Indian could be in line with the Almaz RS that could include radar-based ADAS functionality.