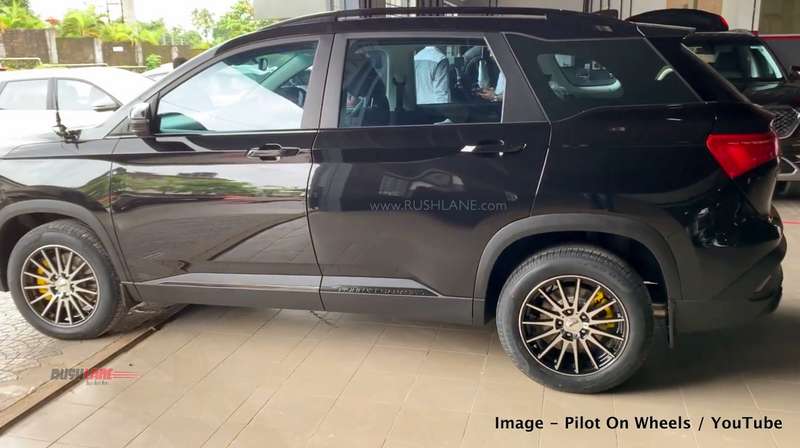 Black colour is one of the preferred options for SUVs, as it gives the vehicle a stately profile and enhances its dominating look and feel. MG Hector already comes with black colour option called Starry Black, which is a glossy shade of black.

However, it has plenty of chrome elements, which, although look attractive, dilute some of the magnificence of the black shade. To achieve an all-black look, an MG Hector customer recently got his SUV wrapped entirely in black vinyl.

In the stock version of Starry Black Hector, there are chrome bits at various places such as front grille, headlamp and fog lamp housing, front and rear skid plates, ORVMs, side skirts, door handles, and roof rails. In the customization project, all these elements have been wrapped in black. Watch the walkaround video below, credit – Pilot On Wheels / Youtube.

Chrome elements that have been left intact are the MG logo on the front grille and tailgate and ‘Hector’ badging at the rear. The wrap job has been executed to perfection and it’s impossible to tell the difference.

In addition to the all-black makeover, customized Hector also gets attractive spoke-design alloys and sporty yellow coloured disc brake callipers. A radio antenna has also been mounted at the front to boost the SUV’s visual appeal.

Black colour seems to be in demand, as we have seen similar customization projects in the past. Hector’s competitor Tata Harrier has also launched a Dark edition, in line with customer needs and expectations. Harrier Dark edition gets an all-black theme across both exteriors and interiors.

Talking about MG Hector, the SUV offers a ray of hope for the ailing auto sector in the country. It has become widely popular with bookings crossing 39,000. Last month, Hector achieved the production milestone of 5,000 units. In terms of sales, it is already ahead of rivals such as Tata Harrier, Jeep Compass, and Mahindra XUV500.

MG will be ramping up production in the coming months to meet the increasing demand for Hector. The SUV is being manufactured at the company’s facility in Halol, Gujarat. MG has plans to launch more products in India including ZS EV and 7-seat Hector.