Since the launch of their first car, Hector in June last year, MG Motor has launched the ZS Electric and Hector Plus in India. In a few days they will launch their most expensive SUV – the Gloster. Next year they will launch more affordable, mass market crossover to take on Hyundai Creta and Kia Seltos – in the form of ZS Petrol. It will be priced under Rs 10 lakhs – making it the most affordable MG car in India.

Apart from launching new cars, they will also be updating the current cars. Recently, Youtube channel Barodian boy Jatin has spotted a new Hector variant near company plant in Halol, Vadodara. It is believed, this is the long awaited Hector Diesel Automatic variant.

Soon after launching Hector diesel BS6 in May this year, MG Motor had confirmed to launch an diesel automatic option for the SUV. Replying to a query on its Twitter handle, MG said that DCT (dual-clutch transmission) option will be made available for Hector diesel BS6 in the near future. However, the exact date for the launch of automatic option has not been mentioned.

Now, with spotting of an updated Hector on road, we expect the launch to take place either later this year or early next year. In the video, you can see the MG Hector Diesel Automatic is wearing larger 17 inch alloys in dual tone as well as a revised front grille.

Not offering an automatic option for Hector diesel variant was quite surprising, as the SUV has been positioned as a premium product equipped with advanced tech and equipment. Moreover, Hector’s rivals such as Tata Harrier, Hyundai Creta and Kia Seltos offer automatic options for their diesel variants. Harrier utilizes the same Fiat soured diesel engine as that of Hector. On Harrier, the engine is mated to a 6-speed automatic transmission. 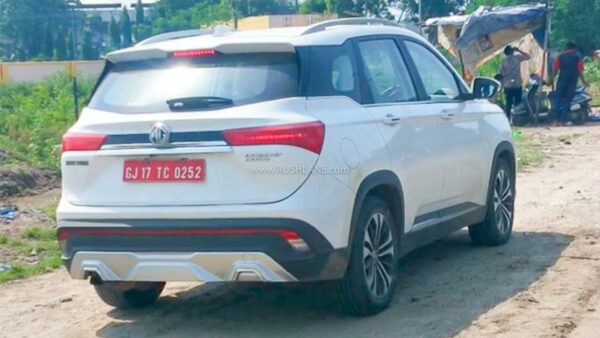 Probably based on market feedback, MG may have decided to launch automatic option for Hector diesel BS6. The SUV is currently available with a 6-speed manual transmission. The 2.0-litre engine is capable of generating 170 ps of max power at 3750 rpm and 350 Nm of max torque at 1750-2500 rpm. Hector BS6 diesel automatic variants are expected to be priced around Rs 1 lakh more than the manual variants.