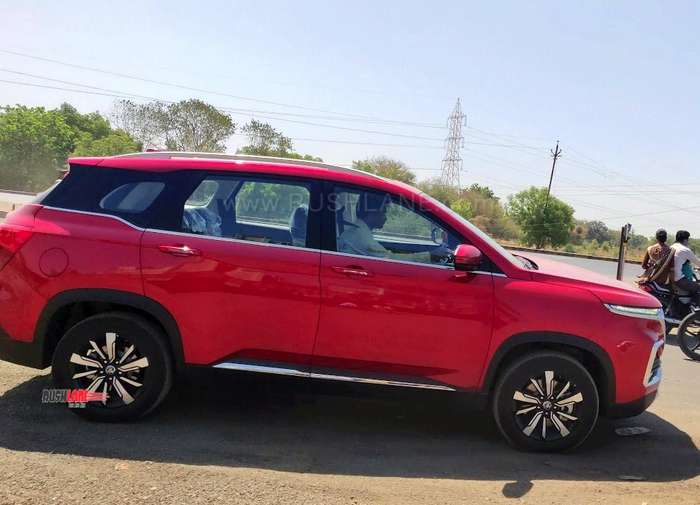 MG Hector is scheduled for launch in India sometime next month. It is being actively tested ahead of launch. The latest spy shots reveal the car in an undisguised format, thereby drawing attention to some of its exterior features. The model on test sported a metallic shade of red.

MG Hector is based on the Baojun 530, with which it shares some features. It gets a camshell bonnet, split headlamps with LED DRLs, fog lamps with chrome surrounds and chrome accents both on the lower front bumper and on its large hexagonal front grille. Features to the rear include LED tail lamps connected by a horizontal strip.

The Hector sits on large diamond cut 5 spoke alloy wheels, gets faux front and rear skid plates, roof rails and oversized rear overhangs. MG Hector SUV is the largest in its class with dimensions at 4,655mm length, 1,835mm width and 1,760mm height. This makes Hector longer than the Mahindra XUV500 and the Tata Harrier. Below is a video of Hector shot by nirmalbhalia5777.

MG Motor India has confirmed that the Hector will be the country’s first internet car for which the automaker has tied up with global partners such as Microsoft, Adobe, Unlimit, SAP, Cisco, Gaana, TomTom and Nuance. The Hector gets an in-built eSIM, a 10.4” touchscreen and its very own Android based OS. The connectivity suite includes AI powered Voice Assist along with pre loaded apps and capacity to receive over the air updates.

The MG Hector will come in with both petrol and diesel engine options. The 1.5 liter, 4 cylinder petrol engine offers 143 PS power and 250 Nm torque while the Fiat sourced 2.0 liter Multijet diesel engine will be capable of 173 PS power and 350 Nm torque. Transmission options include both manual and automatic options. In terms of competition, the MG Hector will compete against the Hyundai Creta, Nissan Kicks, Jeep Compass and Hyundai Tucson.