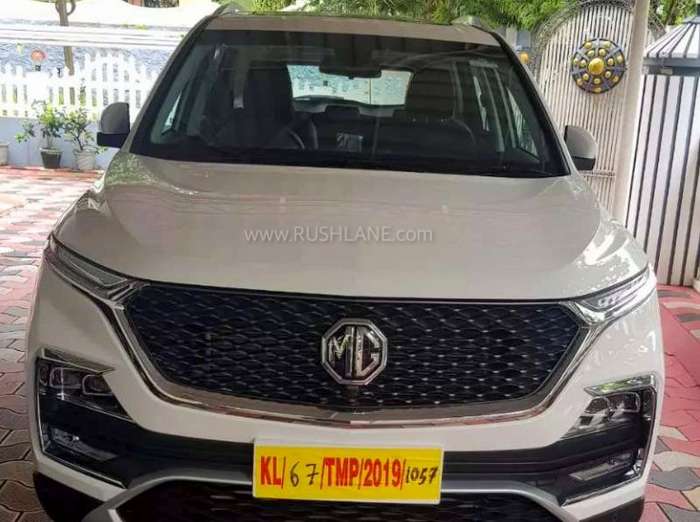 Within just 22 days of launch, MG Hector amassed 21,000 bookings. With plant production capacity at just 2,000 units a month, the company was looking at more than 10 month waiting period. In order to stop waiting period from increasing any more, MG India decided to stop accepting anymore bookings of Hector for 2019.

As of now, MG Hector bookings are not accepted across India. Deliveries are in full swing. MG dealer in Kerala recently created a record by delivering over 30 Hector SUVs in a single day. Similarly, many MG India dealers have created such records of delivering more than a dozen Hector in a single day.

But due to huge waiting period, and no more availability of the SUV in 2019, some owners are planning on selling their car at a higher price, and earn profit. One such owner, who has got delivery of Hector, has decided to sell the car on used car website OLX. The model up for sale is a white coloured Hector diesel top end Sharp variant, which costs Rs 20 lakh on road in Kerala. 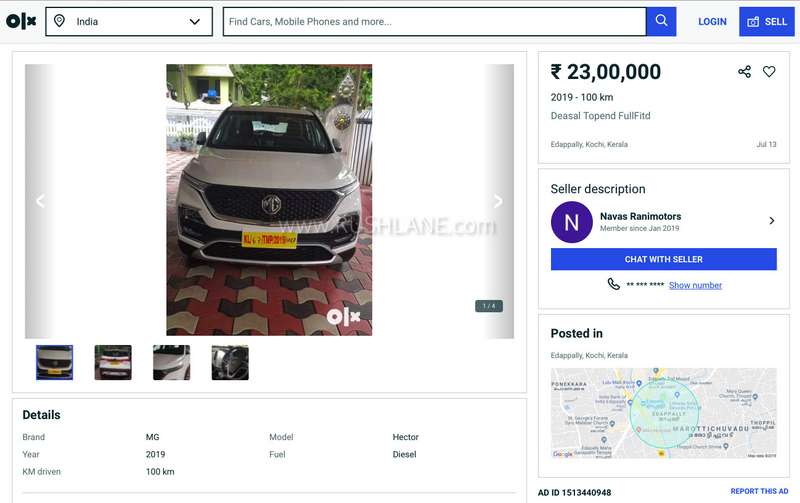 But this owner has listed the car for sale, at a price of Rs 23 lakh. Considering that the car is in such huge demand, the owner has quoted this high price tag, and aiming to earn a profit of Rs 3 lakhs. The car has been driven for less than 100 kms, does not have a permanent number plate as well. It is still seen with a temporary number in the photos shared by the owner on OLX. You can take a look at the ad here.

The MG Hector is country’s first Internet Car and it gets an embedded eSIM powered by Airtel. It sports Internet Protocol version 6 which makes it 5G ready. It also sees a segment first 10.4” portrait oriented touchscreen infotainment system, get over 90 voice commands and boast of class leading dimensions.

MG Hector has the longest wheelbase in the segment, measuring 2,750mm. Length is at 4,655mm while boot space is also the maximum in its segment at 587 liters. It will command a rugged stance with contoured lines, LED head lights with LED DRLs and LED fog lamps while it will sit on 17” dual tone machine cut alloy wheels. Its sporty stance will be further accentuated with roof rails, a panoramic sun roof and LED turn indicators on ORVMs.

MG Hector measures 4,655 mm in length, 1,835 mm in width and 1760 mm in height. It has a wheelbase measuring 2,750 mm. It is powered by a 1.5 liter turbo petrol engine offering 143 bhp power and 250 Nm torque. The 2.0 liter turbo diesel engine offers 173 bhp power and 350 Nm torque. There is also a mild hybrid variant powered by the same petrol engine along with a 48V motor. The engines get mated to a 6 speed manual transmission while the petrol variant also gets a 7 speed DCT.