MG Motor launched their new 6 seater SUV, called Hector Plus in India earlier this month. It is the same SUV which showcased at the 2020 Auto Expo. This. is company’s third offering in India following that of Hector and MG ZS electric vehicle.

MG India has started delivering Hector Plus to the first batch of owners across the country. Introductory pricing of Hector Plus, between Rs 13.49 – Rs 18.54 lakhs, is valid till August 13, 2020, while thereafter pricing could go up by around Rs.50,000 depending on variant. 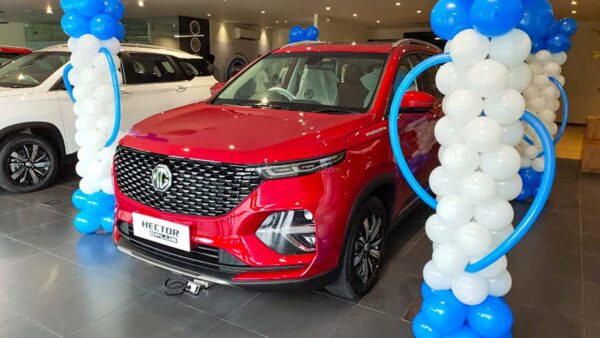 As we have seen on the MG Hector and MG ZS EV, the Hector Plus also gets loaded with features some of which are segment firsts. It is presented in six colour options of Candy White, Aurora Silver, Starry Black, Burgundy Red, Glaze Red and Starry Sky Blue. The Hector Plus gets LED lighting all round right from the LED headlamps with LED DRLs, LED tail lamps to LED front and rear fog lamps. Other features include floating light turn indicators, heated ORVMs, panoramic sunroof, 360 degree camera, front and rear parking sensors and a shark fit antenna. It sits on dual tone machined alloy wheels.

Interior seating and door liners are finished in a Smoked Sepia Brown Leather. It is seen in three row seating arrangement and gets captain seats in the middle row. The driver’s seat in 6 way power adjustable while the co-driver seat can be 4 way power adjusted. 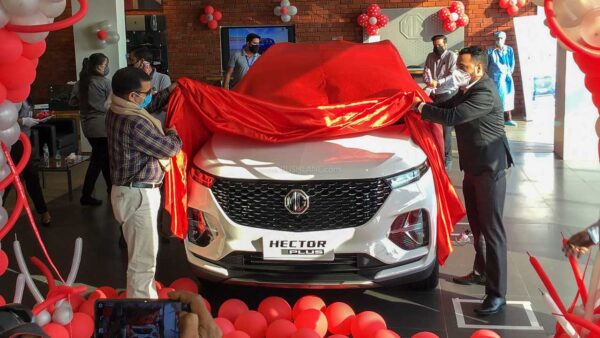 MG Hector Plus is fitted with i-Smart connectivity technology with over 55 connected car features. It gets a 7 inch coloured digital MID system offering information on navigation, music, calling and TPMS, etc. Other on board features include a leather wrapped multi function steering wheel, 8 colour ambient lighting system and twin pane panoramic sunroof. The tail gate can be opened by swiping our foot under the sensor.

Where safety is concerned, the Hector Plus is also well equipped with multiple airbags, ISOFIX child seat anchors, electronic stability management and traction control. The top spec MG Hector Sharp variant receives a total of 6 airbags and heated ORVMs along with auto headlamps.

The MG Hector Plus 6 seater aims to eat into the sales of Toyota Innova Crysta. However, it will face some competition very soon from the Tata Gravitas, scheduled for launch in coming months. The Hector Plus 7 seater variant is also heading to launch sometime later this year.