MG Hector Plus is based on the existing Hector SUV, but is slightly longer and comes with more features. It is the 3rd offering from MG in India. Hector Plus has entered production at the company’s Halol plant in Gujarat. It will be produced in the same line where the Hector is produced. Thanks to high demand for MG cars, the company plans to hire around 200 associates so as to ramp up production.

The new Hector Plus was on display at the 2020 Auto Expo earlier this year. It sets itself apart from the Hector with captain seats in the middle row and has a 3rd row as well. It will be sold as a 6 seater initially. Expect a 7 seater variant to be launched at a later date.

Hector Plus receives some changes in its exterior makeup with new headlamp designs, a revised front grille, new front and rear bumpers and a new rear tail gate design. The video just released shows off a striking feature for opening the boot with ‘Leg Swipe’ feature. This feature is already seen in some cars in India, where you swipe your leg under the tailgate of the car, and the hatch opens. Watch the video here. 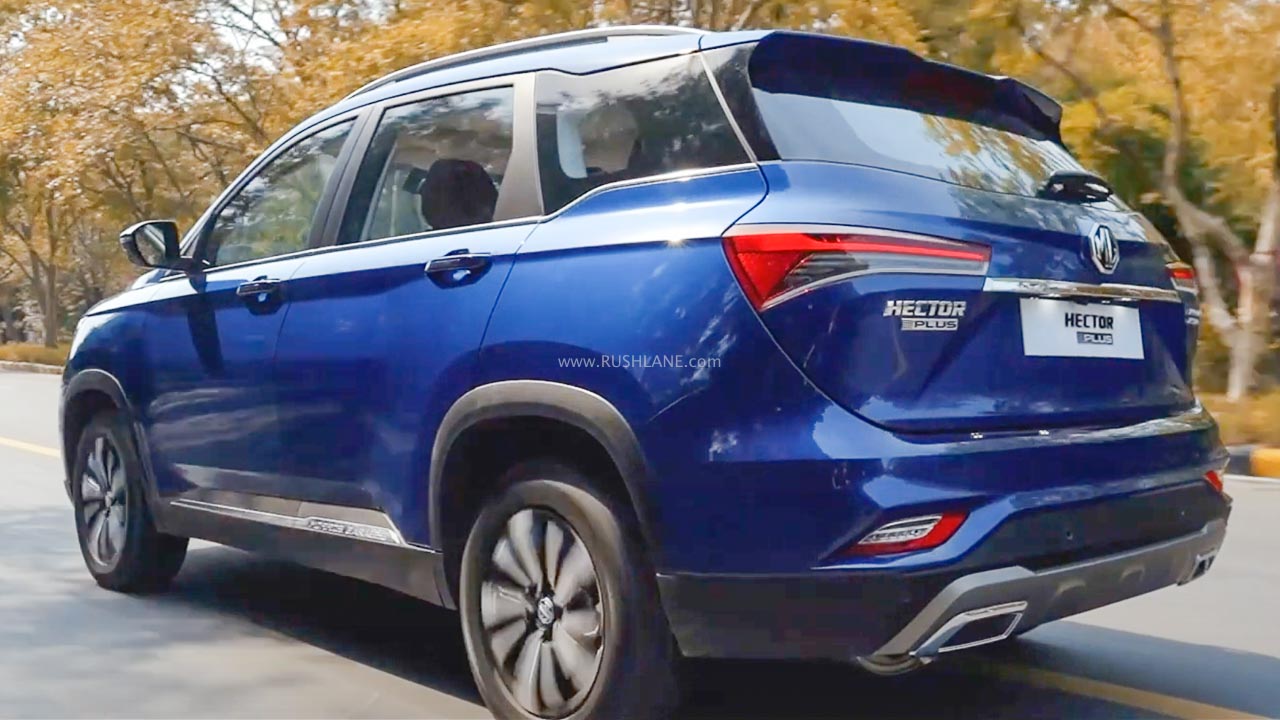 In terms of its interiors, Hector Plus will have similar features to that seen on the Hector SUV except for the change in seating as it will be available in 6 (2+2+2) and 7 (2+3+2) seating configurations. It will get a 10.4” vertical touchscreen infotainment system, an eSIM for connected car technology, power adjustable front seats, a panoramic sunroof, cruise control and upto 6 airbags.

It will also get a 360 degree camera, a USB charging port and AC vents in the third row seating. The Hector Plus will also come in equipped with Over the Air (OTA) technology, enabling users to update the software and firmware. OTA can also update feature themes and infotainment content of the system.

MG Hector Plus will be powered by the same engine that is seen on the Hector SUV. The BS6 compliant 1.5 liter turbo petrol engine makes 143 PS power and 250 Nm torque while the 2.0 liter turbo diesel engine develops 170 PS power and 350 Nm torque. Both the engines get mated to a 6 speed manual gearbox while the petrol engine also gets an automatic option. There will also be a mild hybrid variant with the petrol option.

With the launch of Hector, MG aimed at taking on the likes of Mahindra XUV500, Tata Harrier, Jeep Compass, etc. With the Hector Plus, the company is aiming to take on the likes of Toyota Innova Crysta. Expect the price of Hector Plus to be about Rs 1 lakh more than the Hector 5 seater. More details will be revealed at launch in the coming weeks.