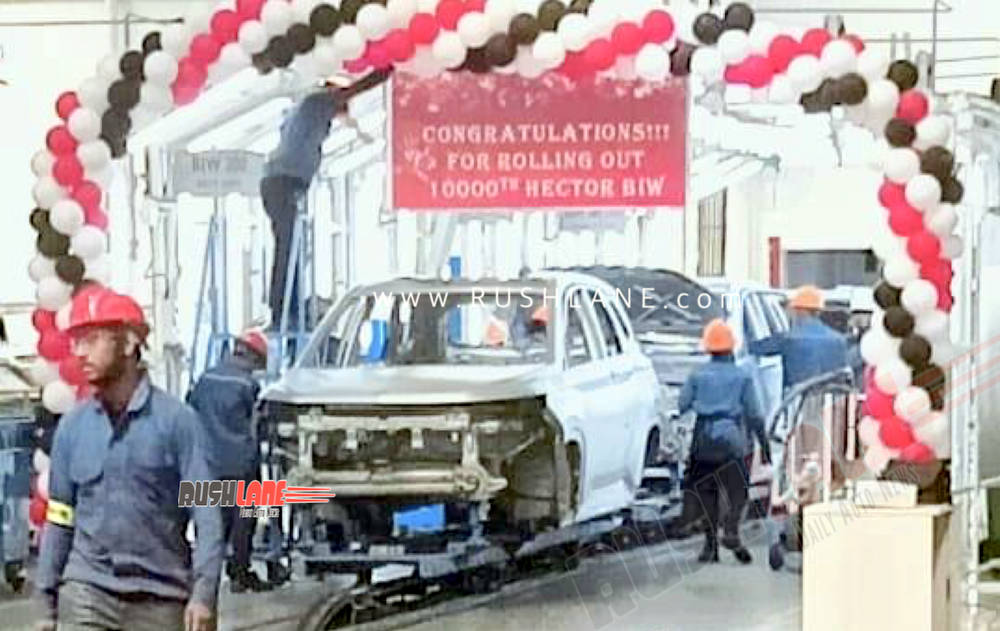 MG India had announced back on 5th Sep 2019, that Hector production has crossed the 5,000 mark. Now a photo has leaked from company plant in Baroda, Gujarat – which reveals that the production of Hector has now crossed the 10,000 mark.

This means that the company took about 3 months to produce the first 5,000 units of Hector. But the next 5,000 units were produced in under 1.5 months. This has been done because at the time of launch, monthly production was at 1,500 units. But thanks to huge demand, production has been increased to 3,000 units per month.

MG India will increase the production even further so as to reduce Hector waiting period. The company is sitting on order book of over 40,000, of which more than 6,000 units have been delivered.

Like Seltos was the debut car for Kia Motors in India, the Hector is also the first offering from MG Motors in the country. MG Hector is a 5 seater mid-size SUV, that is offered in four trims – Style, Super, Smart and Sharp and is priced between Rs.12.48-17.27 lakhs, after the recent price hike of up to Rs 40,000.

The success of MG Hector in India, at a time when the auto industry claims to be going through a slowdown, is noteworthy. Hector has helped the company get a solid footing in the Indian auto industry. Based on this footing, the company has plans to launch more cars in India.

The next car MG will launch in India is the all electric ZS SUV. It will be launched by Jan 2020, at an estimated price tag of Rs 20 lakhs. It will take on the likes of Hyundai Kona and the upcoming Tata Nexon EV.

After ZS EV, MG will launch a more premium variant of Hector. It will come with revised styling on the front as well as rear. On the inside, it will get a 6 seater arrangement, in 3 rows. This new Hector variant will be 40mm longer than the current Hector – so as to give more room to the passengers inside. Middle row will have captain seats. This variant will aim at Toyota Innova Crysta as a rival.