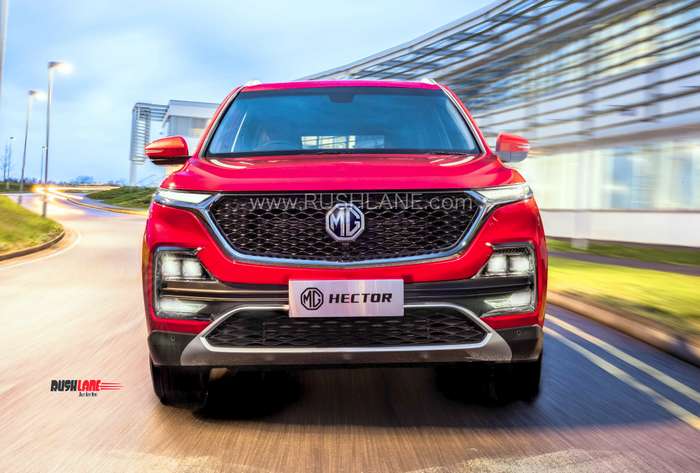 MG Motor has envisioned a long and successful journey in India and will be taking its first steps with the public unveiling of Hector SUV on May 15. Bookings will officially commence after this date. Launch has been scheduled for next month and production has already commenced at MG’s Halol plant in Gujarat.

Hector will be entering a highly competitive and fast growing segment, where it will take on rivals such as Jeep Compass, Tata Harrier and Hyundai Tucson. MG Motor appears to have done its homework, as Hector comes with quite a few first-in-class and best-in-class features.

It is these features which are now highlighted, in a series of officially released videos, which can now be seen below. One of the video shows how you will be able to open and close sunroof with voice command. Then there is the power operated bootlid, turn on the AC using the car app on your phone – so that by the time you get inside the car, the cabin temperature is as per your command. Gaana app too is highlighted in the video TVC.

Hector is set to dominate the roads and rivals alike, as it will be the largest SUV in its class, measuring 4,655mm x 1,835mm x 1,760mm (LxWxH). It will be offering high-ground clearance, making it suitable for the great outdoors. Exteriors carry the classic charm of a luxe SUV and come with sleek LED headlamps, blacked out grille with chrome surrounds, brushed-aluminium faux skid plate, squircle wheel arches, floating roof design, LED tail lamps and snazzy diamond cut alloy wheels.

Things get even more interesting on the inside, where MG Hector packs in a large 10.4-inch vertically mounted touchscreen infotainment system, quite similar to the ones seen on Tesla cars. Hector also boasts of the connected car tag, as it comes with a wide variety of connectivity features.

With connected technology, users can access various types of information and services such as real-time traffic updates, weather forecast, vehicle’s health status and diagnosis, e-call emergency, voice assist system, etc. These advanced features are being offered in collaboration with MG Hector’s technology partners that include Microsoft, SAP and Cisco.

Powering Hector will be a 1.5 litre, 4 cylinder petrol engine that generates max power of 143 PS and max torque of 250 Nm. A mild hybrid of this engine will also be offered as an option. Hector diesel variant will be powered by Fiat-sourced 2.0-litre Multijet engine that makes 173 PS power and 350 Nm torque. Engine is mated to a 6-speed manual transmission. MG Hector has plans to commence operations in India with 50 dealerships and around 120 touchpoints. Financial services will also be provided in collaboration with YES Bank. Expected starting price of MG Hector is in the range of Rs 13-16 lakh.