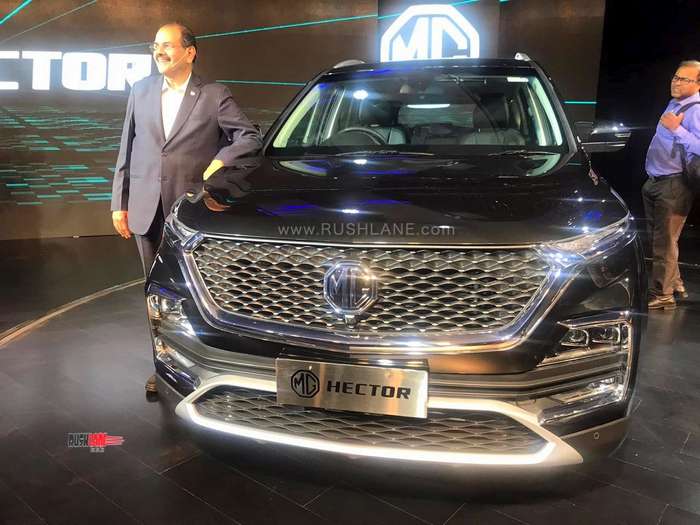 Features – MG Hector is the most feature rich car in the segment. It comes with eSIM connectivity that works seamlessly with voice command system and the state of the art 10.4 inch vertical standing touchscreen infotainment system, which too is the largest in its class. Apart from that, it gets leather seats, top quality interiors with soft touch materials, adjustable rear seats with recline, largest bootspace, etc. Below is a detailed comparison of dimensions and features on offer on all four cars. 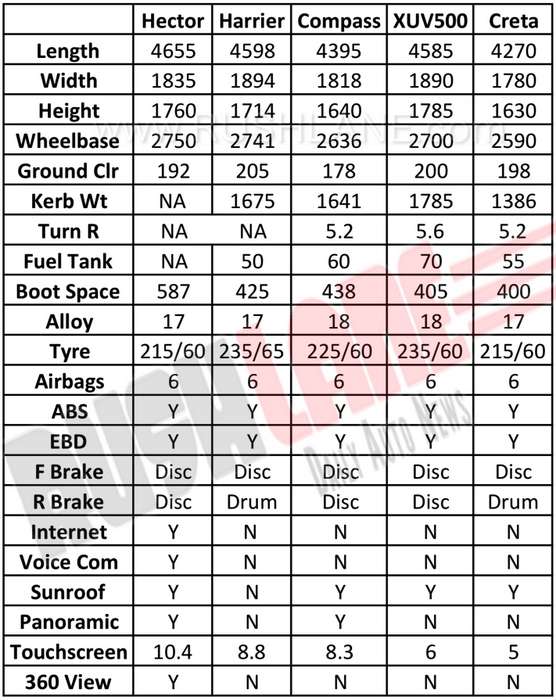 Engine: Three of the SUVs in this group are powered by the same 2.0-litre diesel engine and 6 speed MT. These are Tata Harrier, Jeep Compass and MG Hector. The engine is produced by FCA India (parent of Jeep India), at their plant near Pune and is supplied to Tata and MG plants, which are located in Pune and Halal respectively. Power and torque output of Hector and Compass are same at about 171 PS and 350 Nm while that Harrier has been reduced to 140 PS and 350 Nm. Mahindra XUV500, which has a 2.2-litre diesel unit, rated at 155 bhp / 360 Nm.

Diesel mileage claimed by Hector, Harrier, Compass is in the 17 kmpl region. Mahindra XUV500 claims the lowest mileage at 13.8 kmpl. Compass and XUV500 are on offer with AWD option as well. Others only come in FWD system.

Petrol engine is offered in two tunes with the Hector. One comes with 48 V battery hybrid system, while the other does not. Power output remains same from 1.5 liter petrol engine, that is 143 PS, but torque in hybrid is 20 Nm more than that of non hybrid. Harrier does not come with petrol engine. Compass Petrol is a 1.4 liter mill, rated at 160 PS and 243 Nm. XUV500 gets a 2.2 liter mill generating 140 PS and 320 Nm. Hector is the only SUV which gets DCT gearbox in the group. Mileage claimed is in the 14 kmpl region. Below is a detailed comparison of engine, transmission and mileage of all SUVs. 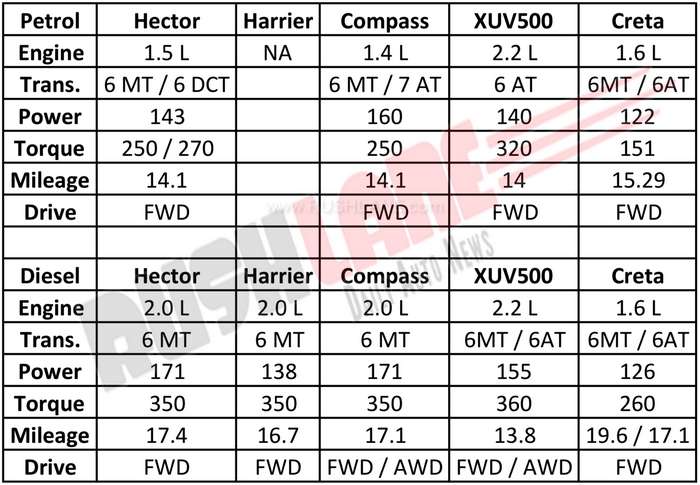 Hector will be available all throughout India, even though official dealer network is yet to be revealed. It is the first SUV in its class to offer 50+ connected car features. Bookings will start in first week of June and deliveries will commence later that month.