The MG ZS EV was launched earlier this year and is priced at Rs.20.88 lakhs for the base variant 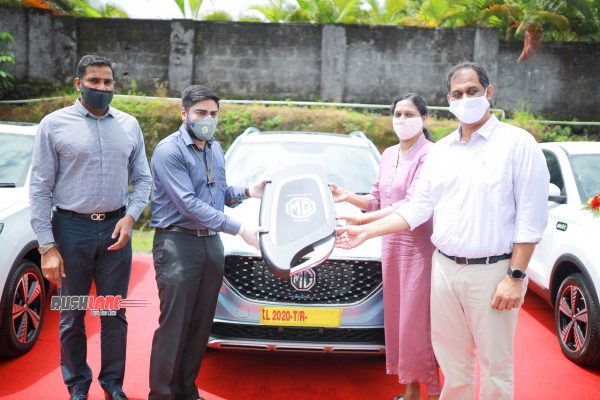 MG Motors dealership in Kochi, Kerala has handed over 11 units of brand new MG ZS EVs to customers over the past weekend. This is among the highest units of electric car delivered by a single dealer in 1 day. Back in October last year, MG Motor India had created record of delivering more than 700 units of Hector SUVs across India, in 1 day.

Speaking about the MG ZS EV, it was launched in India earlier this year. It is presented in two variants of Excite and Exclusive and priced at Rs.20.88 and Rs.23.58 respectively, ex-sh. Colour options include Ferris White, Currant Red and Copenhagen Blue.

One of the most technologically advanced EV on offer in India, on board features include rain sensing wipers, automatic headlamps, electrically adjustable front seats, a panoramic sunroof and a 20.32 cm touchscreen infotainment system with MG i-Smart internet car technology with Android Auto and Apple Car Play. The MG ZS EV also receives an embedded eSIM with an in built Wi-Fi. 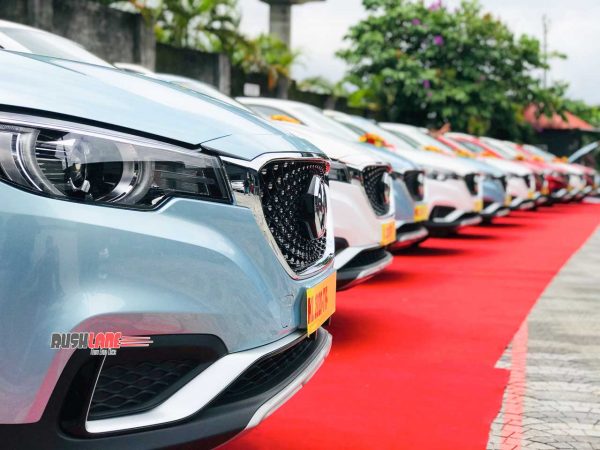 Currently one of the few electric vehicles on sale in India, bookings initially opened in cities of Hyderabad, Delhi-NCR, Bangalore, Ahmedabad and Mumbai. Noting increased demand which exceeded supply, further bookings were put on hold while the second phase of bookings opened on 1st June 2020 in cities of Surat, Kochi, Jaipur, Chennai, Pune and Chandigarh. Initial demand was impressive as within days of bookings open, ZS EV had received more than 2,800 bookings. This is the highest number of bookings ever to have been received by an electric car in India.

MG ZE EV gets its power via a 44.5 kWh battery pack producing 141 hp power and 353 Nm torque. The engine offers a range of 340 kms while acceleration from 0 to 100 kmph is achieved in 8.5 seconds. As per MG, the running cost of the ZS EV is less than Re 1 per kilometer. A similarly priced petrol / diesel car would have a running cost of about Rs 8-15 per km.

The MG ZS EV can be charged via a fast charger as well as a regular charger. Fast charging will charge upto 80 percent battery in 50 minutes while on a home AC charger, 100 percent charging will be completed in 6-8 hours. MG Motor is offered each customer a portable charger with a three pin plug which takes nearly 17 hours to get fully charged.

Speaking about sales, MG ZS EV sales stood at 158 units in February 2020 dipped to 116 units in March while sales failed to take off in April due to nation wide lockdown. As economic activity increases, sales too are increasing. In May, sales of ZS EV were at 38 units, which bounced to 145 units in June 2020.