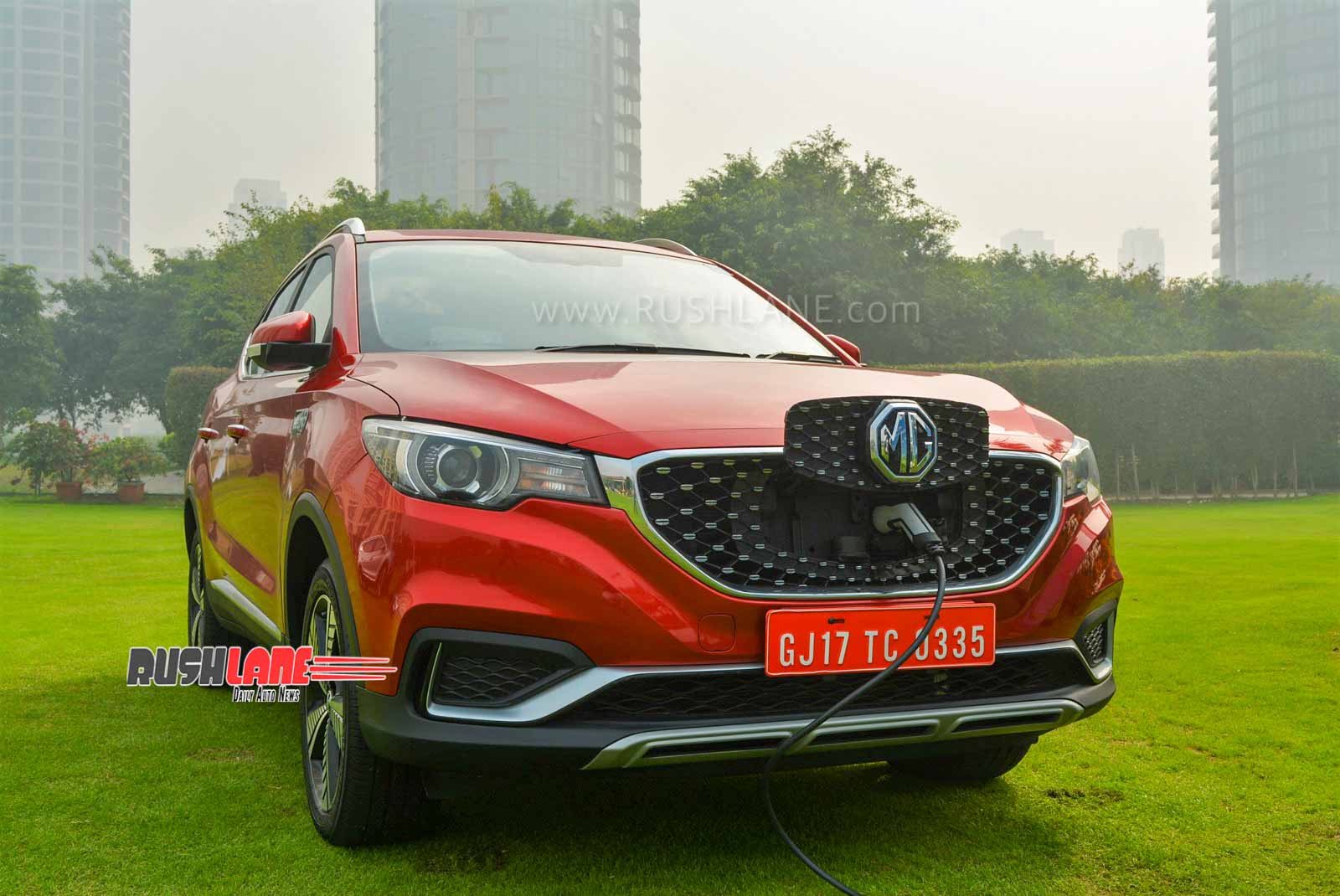 MG had brought in the Hector earlier in June 2019 and the SUV managed to surpass all expectations. Now, MG is ready with its second product for the Indian market and it is yet again, an SUV, an electric one though!

We were recently invited by MG Motor to Delhi to test drive their first electric offering, the MG ZS EV and here are our first impressions.

Exteriors – MG calls the ZS EV India’s ‘First Pure Electric Internet SUV’, however, we wouldn’t mind calling it India’s first Electric SUV either. The ZS EV (or eZS, as it is called in select markets) has dimensions and proportions, which justify the ‘SUV’ tag (something which is very loosely used nowadays). It is based on a monocoque platform and has a typical urban SUV stance. Below is the detailed walkaround video of the new MG ZS electric SUV.

The front grille looks smart with the MG logo boldly placed in the middle while the chrome pattern adds a dynamic feel to the design. The headlamp setup too stands out, with its DRL elements and projector units. MG states that the DRL’s pattern has been inspired from the iconic London Eye, and you can spot the similarity when you look closely.

Move to the side and you notice 17-inch alloys, which draw their design inspiration from windmills (well, coz, Go Electric!). The shoulder line runs strongly across the body while the roof-rails and body cladding add to the SUV quotient. The rear is dominated by large backlights and MG badging. In our opinion, proportions of the back aren’t as great as the rest of the SUV. However, overall, the design would get a thumbs up! 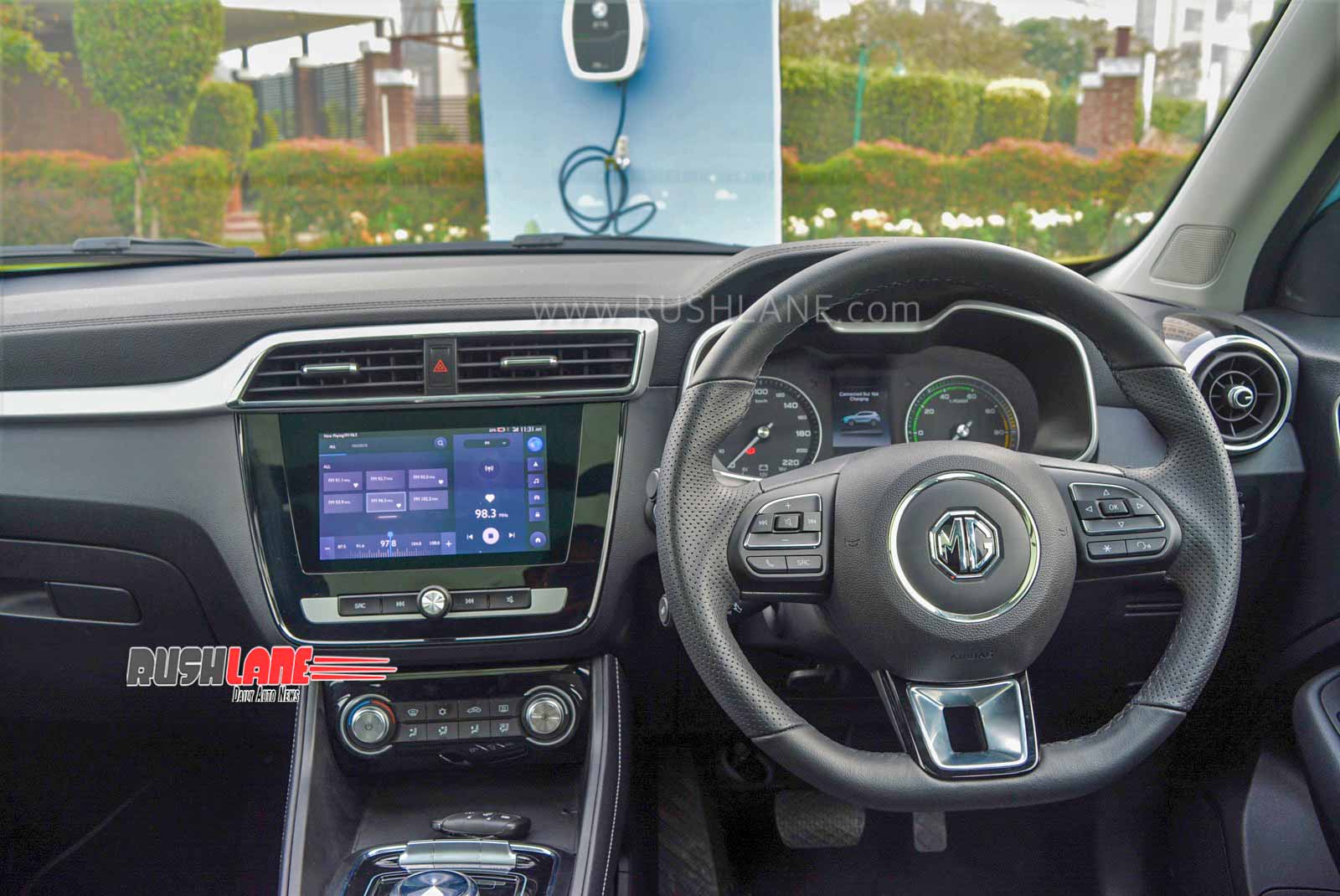 Interiors – Step-in and you notice that MG has given an all-black interior theme to the ZS EV. In case you think that it would make the cabin look small, you are wrong, because the extremely massive sunroof and large windows help to bring in considerable amount of light from outside. We used two adjectives to describe the sunroof because it genuinely is humongous, in fact as per MG, it covers 90% of the roof area!

Quality of materials inside the car are impressive and very rarely do you come across any hard touch plastics. The 8-inch infotainment unit is new and seems like a next generation version when compared to the laggy unit found on the Hector. Yes, it does get all the ‘Internet Inside’ features (connected Apps, Android Auto & Apple CarPlay) but more importantly, it responds the way you would want a touchscreen unit in 2019 to! 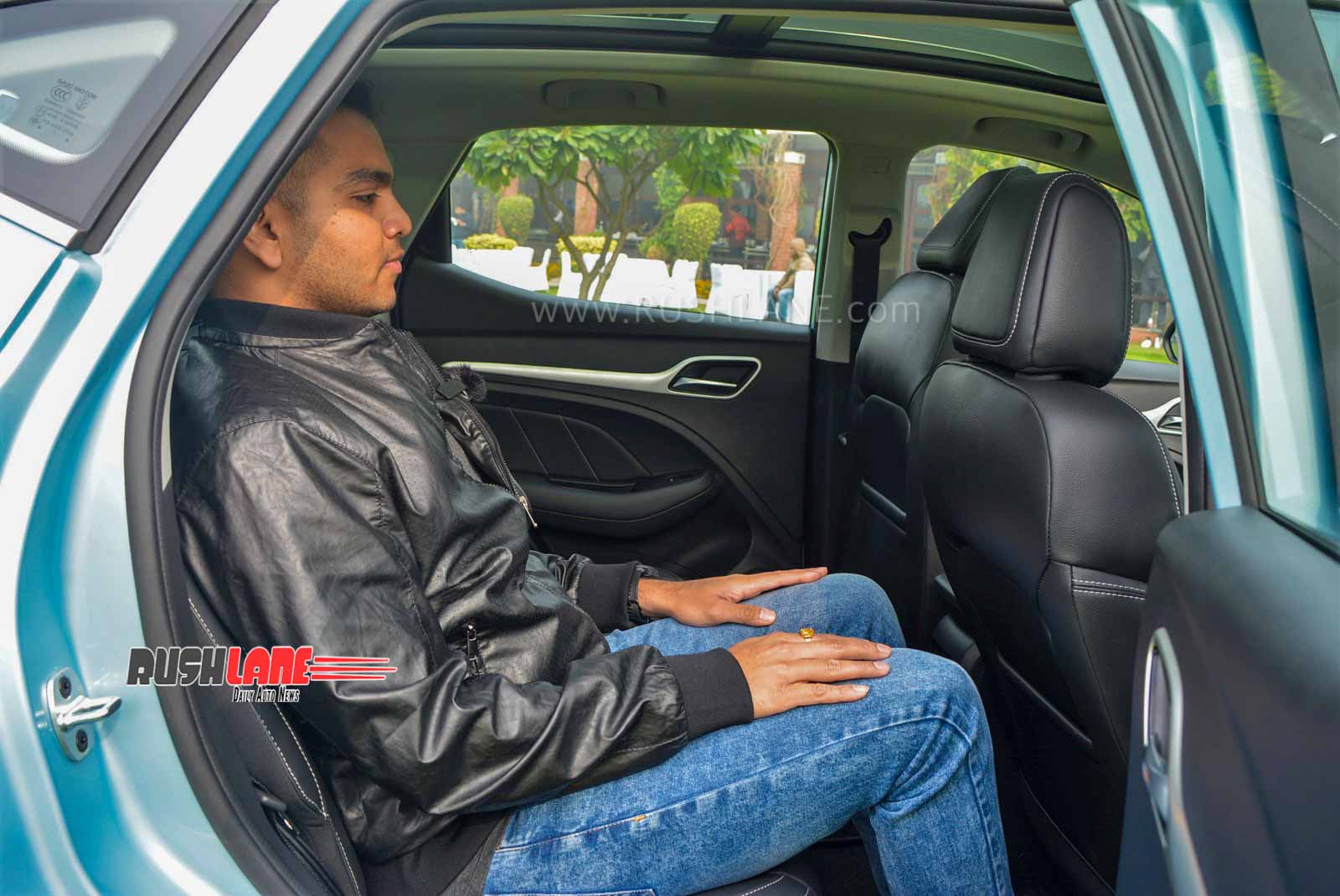 Front seats are comfortable and so is the rear bench. However, some additional support for the thighs wouldn’t have hurt, especially in the rear. The second row seats come with a 60:40 split and an almost flat floor. Headroom and legroom is good and shoulder room is decent, if not great. 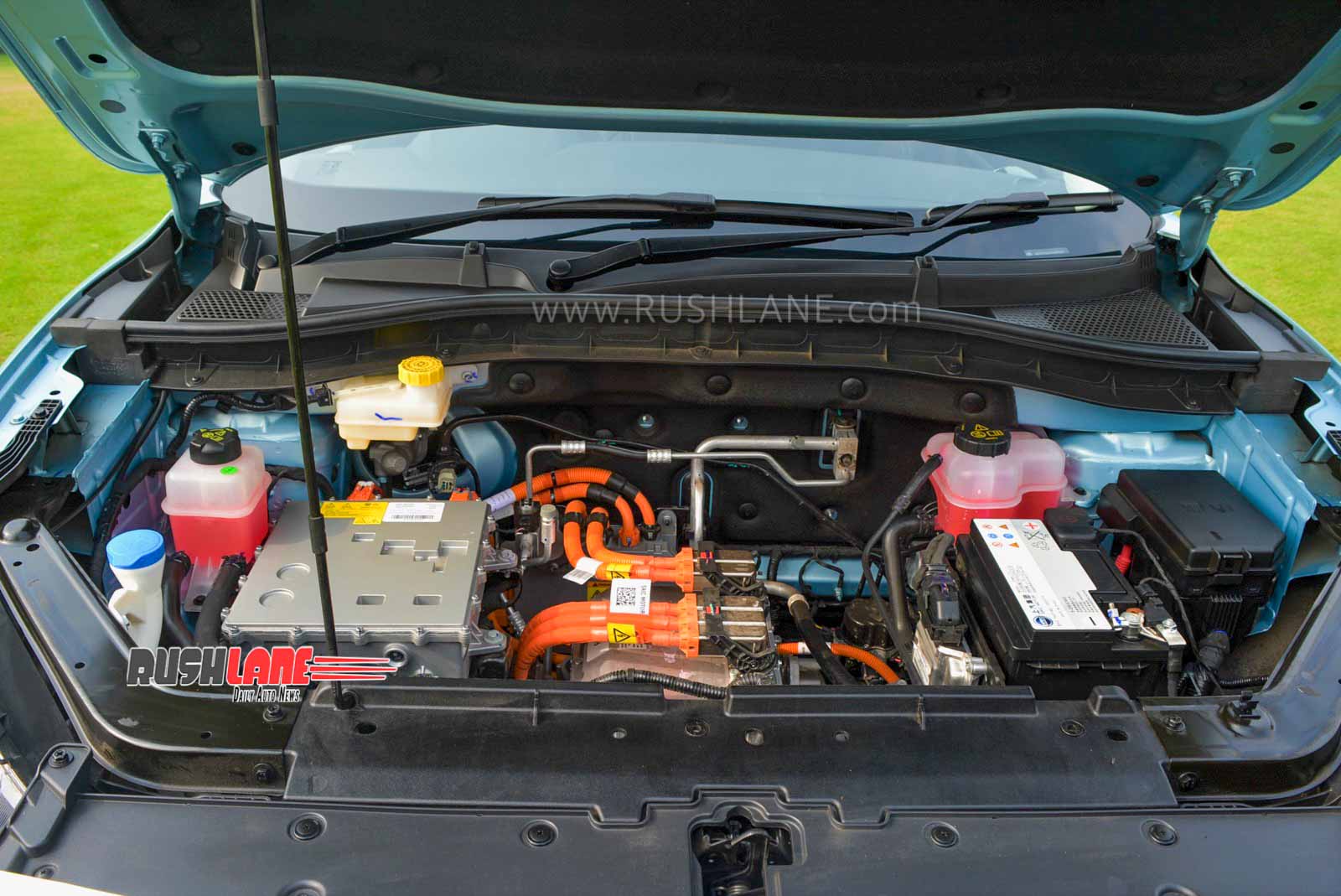 Powertrain & Driving Dynamics – Under the hood you find an electric motor which dishes out 142.7 PS & 353Nm of max torque. The motor draws power from a 44.5 kWh lithium battery. Power delivery happens to the front wheels in a very linear and uninterrupted manner. There are three driving modes on offer, Eco, Normal and Sports (names are self-explanatory). Additionally, you can adjust the setting of the KERS, to further change the way your car behaves and works upon energy regeneration.

Eco & Normal modes are relatively self-sufficient for regular day-to-day city drives, however, if you happen to be an enthusiast on a wide stretch of open road, switch the car to Sports mode and the electric motor will bring in a massive smile to your face. MG claims that the car can do a 0 to 100 kmph in 8.5 seconds. While driving on highways, we took the liberty to take the machine to good 3-digit speeds, and the car never ran out of breath! 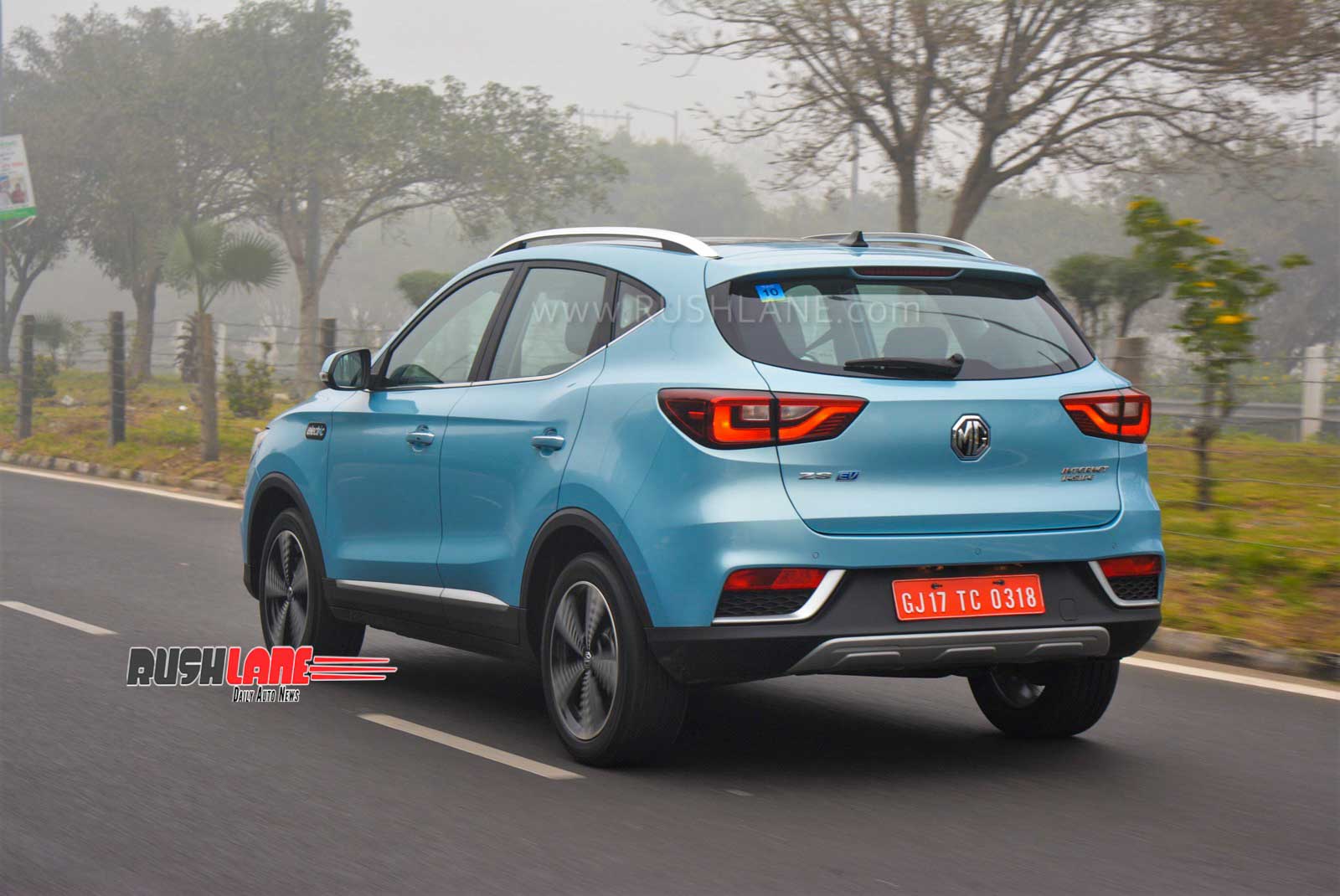 Ride & Handling – The ride of the ZS EV is well balanced, neither too soft, nor too hard. What stands out though is that the body roll is unnoticeable. There are 4-disc brakes on offer and they do their job deftly. What relatively spoils the handling of the car is the uninspiring steering. Though a little heavy than the usual electrically assisted steering racks, this one fails to pass on feedback from the road.

NVH levels are impressive, partially thanks to the fact that it is an e-SUV and there is no diesel guzzler chugging diesel at 5000 RPM. At lower speeds there is some motor whining which can be heard inside the cabin which gets mellowed down by wind and tire noise at higher speeds. Overall, a good job in the NVH department. 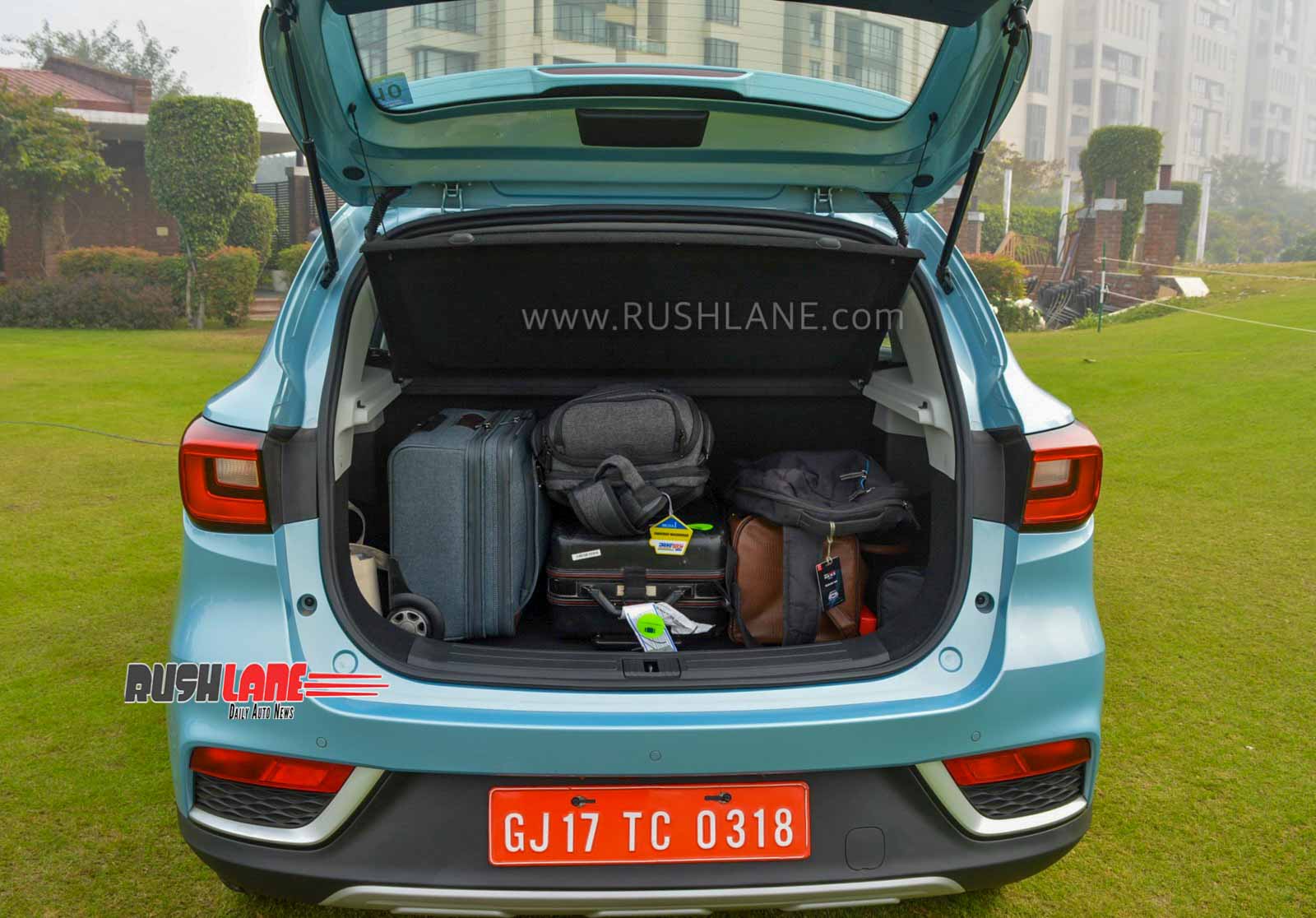 Safety – Safety has been given priority and the ZS EV comes packed with 6 Airbags, ESP, ABS, Hill Descent Control, Pedestrian Alert System, ISOFIX Child Seat anchors and even rear seat belt reminders. To ensure that you breathe in clean air (safety for your lungs!), MG has also installed a PM 2.5 filter.

As far as official ratings are concerned, earlier this month, EURO NCAP had crash tested the SUV and given it a 5-star rating. However, that was not for a model assembled in India. 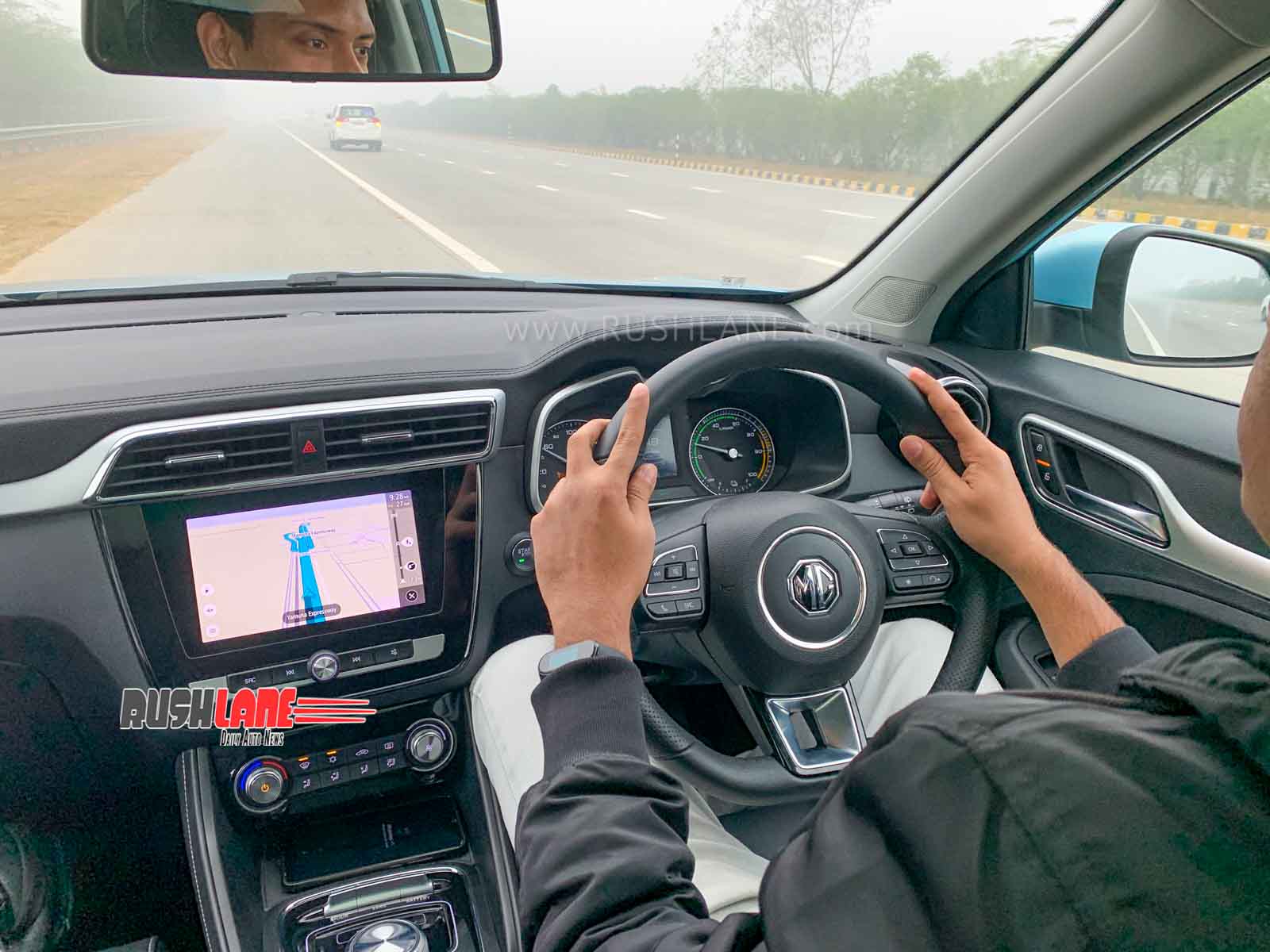 Charging, Infrastructure & Maintenance -Coming to the most critical part for your ownership experience, how do you charge the car and what does it cost? There are 3 ways to charge your ZS EV. You can plug your car into a DC Fast Charger which can top it upto 80% capacity in just 50 minutes, then you have the AC Fast Charger which would take around 6-8 hours for the same feat. The third option is to use a portable AC charger which can charge the battery to around 80% in 16-18 hours.

MG is currently working upon setting up of infrastructure of 50kW DC Fast Chargers. To begin with, there will be 10 units available, across India. These will be at MG Dealerships, with 4 of them in Delhi NCR, and others available in cities where the car will first get launched. The video below explains the fast charging process of the MG ZS EV.

As a regular customer, MG will be giving you two chargers, an AC Fast, which it will help you to install at your home/office (depending upon your preference) and a portable AC charger which you can plug-in at any regular 15 A plug point. In extreme cases, if your car runs out of juice, you can call MG’s RSA which will top-up your car with enough charge so that you can reach the nearest charger safely.

The commendable step by MG happens to be that its DC Fast chargers will support charging of other EVs too, and not just for ZS EV. In fact, its DC Fast chargers has two kinds of ports CCS & CHAdeMO, supporting both, European and Japanese standards (assume it to be an equivalent of a charger with ports for both iPhones & Android devices). Additionally, to make the ownership a breeze, MG is providing 5 Years unlimited warranty, 5 Years RSA and 5 Labour Free Services.

As far as range is concerned, as per ARAI, the ZS EV will be able to manage a run of 340 km on a single charge. From our experience, which included a mixture of city and highway drive (and occasional use of the Sports mode too), we believe that it is safe to expect a real-world range of at least 260-280 km on a single charge. 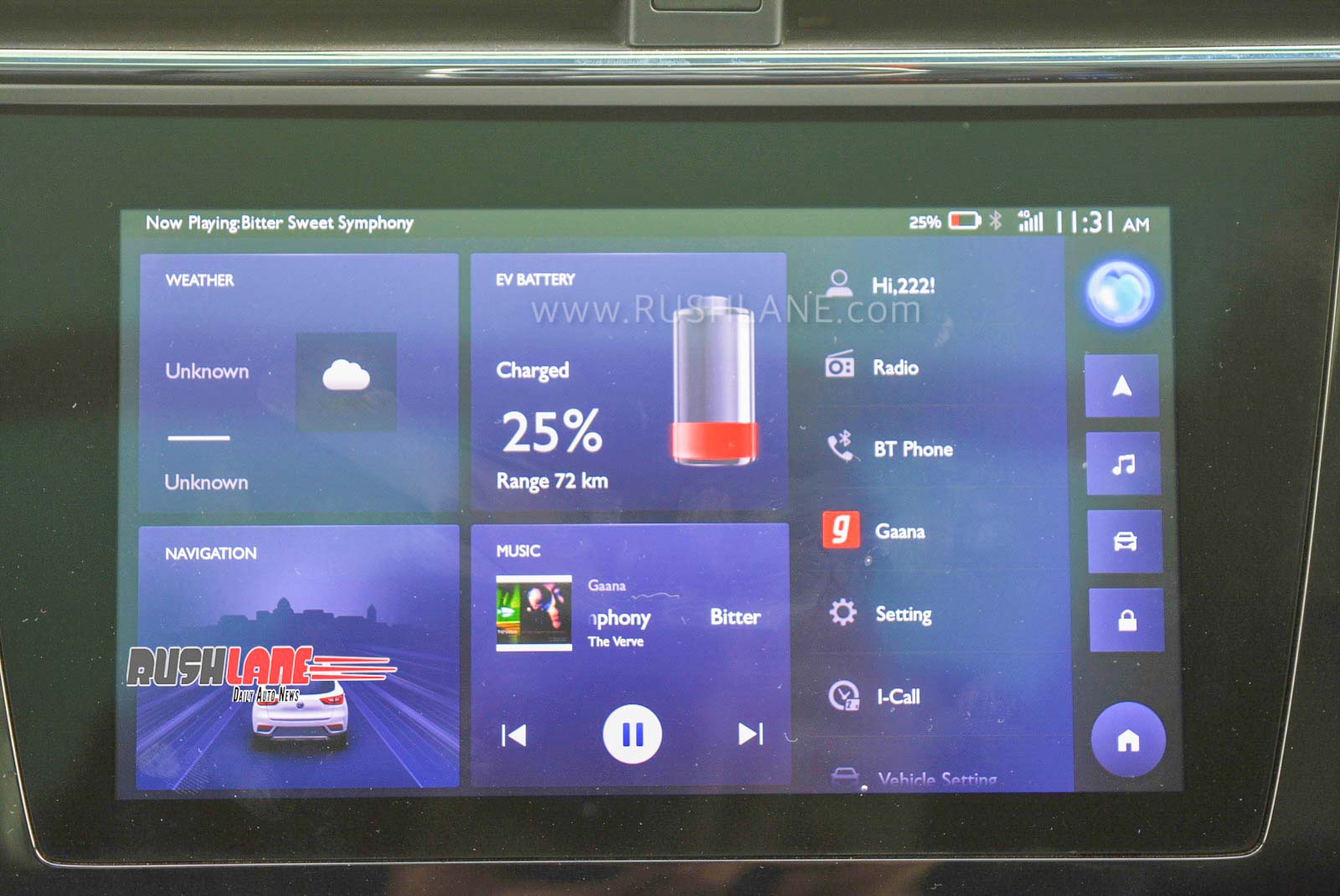 Verdict – Apples shall be compared with Apples and not oranges and that is what we will try and do here. When we look at the possible options of electric vehicles in the Indian market, only 2 other serious contenders can be considered. One happens to be the Kona and the other will be the upcoming Nexon EV from Tata Motors. While comments upon the Nexon EV won’t be fair (as we are yet to experience it), we can comfortably say that the MG ZS EV comes out as a better overall package when compared with the Kona.

Yes, it does miss out on certain elements like ventilated front seats, an all-digital instrument cluster, a larger range from the battery or higher power output from the motor, however, for all practical purposes, it has everything you would need from an urban electric SUV. Few things which really made us like it are the fact that it actually is worthy of the SUV tag and provides considerable space both in the cabin and in the boot; and all the tech & gizmos simply work like cherry on the top! 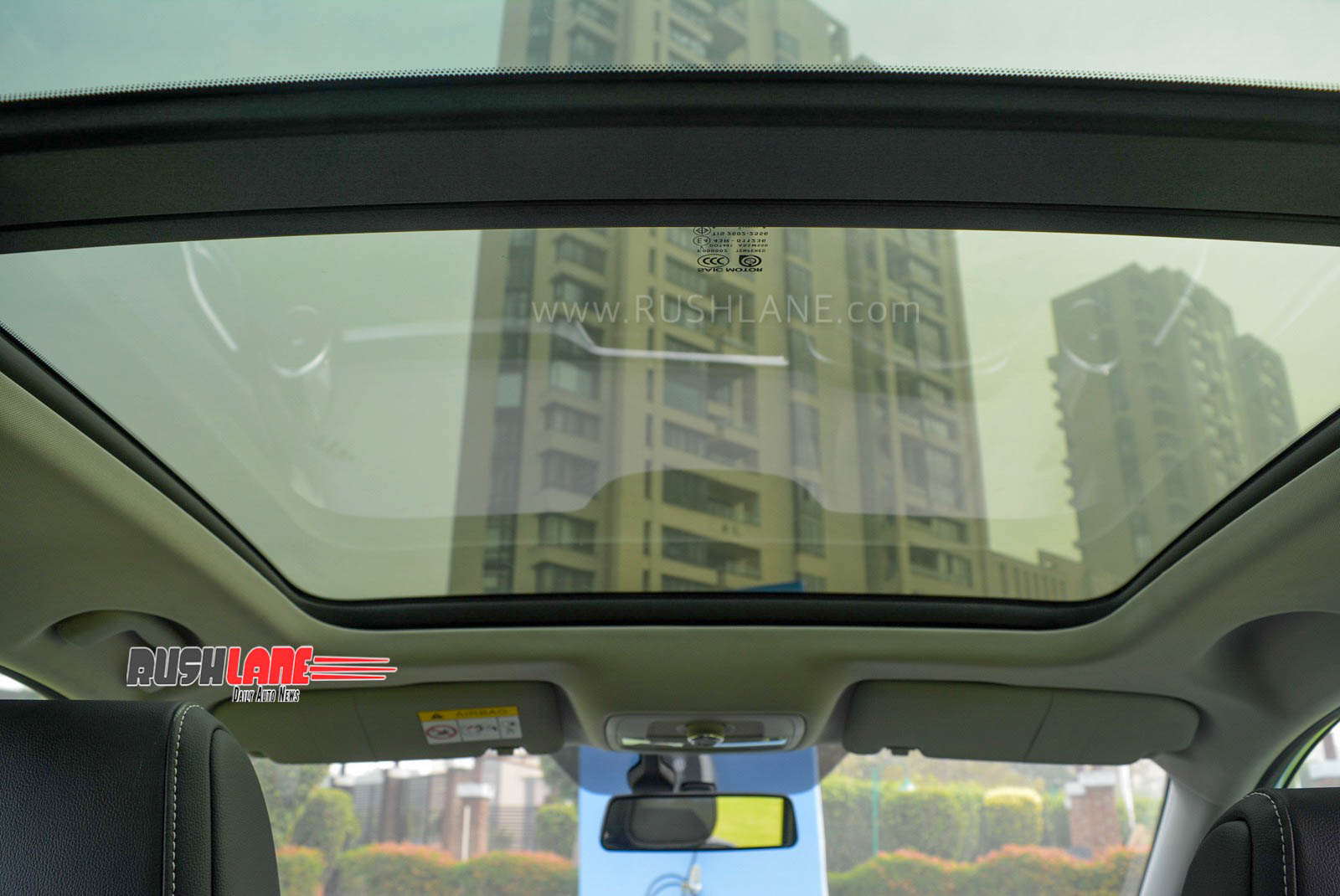 We would wish that MG prices the ZS EV aggressively, which would make it a great value for money option and lure more customers into the EV ecosystem!

Disclosure: For this review, MG Motor invited and hosted us in NCR, and paid for our travel, stay, and food.