A few decades ago, the Italian scooters were one of the most common sights on Indian roads but as the 2-stroke era faded away, the Vespas, Lambrettas and their Indian derivatives who were responsible for putting generations of Indians on wheels rapidly disappeared from the scene. Now, the few surviving units have become prized possessions.

The Vijay Super Mark 2, the India-made version of the popular Lambretta DL, is now a collector’s item and a delight for restoration specialists. Here is one such example from Bangalore, India. This red-yellow Lambretta scooter is not only restored but is extensively modified. It is not everyday we come across a modified vintage scooter in India, especially one which can put to shame a lot of medium displacement sportsbikes on the market on a straight line drag. 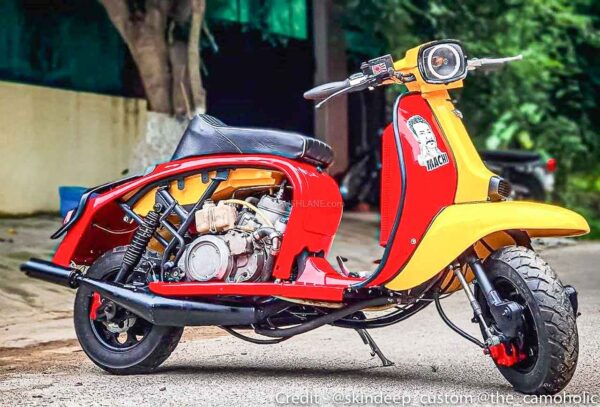 The engine transplant required extensive modification of the chassis and engine bay. The liquid-cooled motor’s radiator is located upfront and is fed via a custom intake on the apron.

With so much power at its disposal, the modified Lambretta scooter needs strong enough brakes and suspension to hold it together. The front end receives additional dampers and two disc brakes while the rear gets beefed up shock absorbers and a single disc. Premium tyres and a custom twin exhaust system add to the scooter’s high-performance credentials. 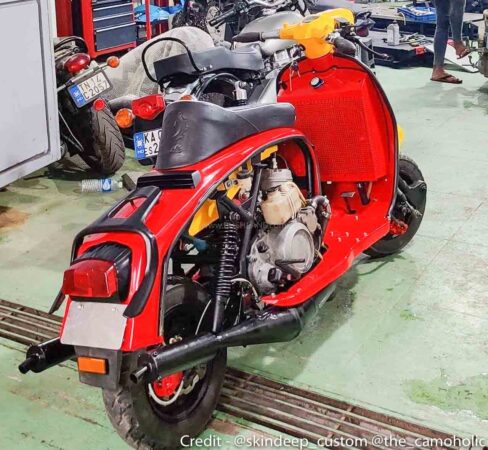 While the vehicle seems to be adequately reinforced to handle all that additional power, taming a ferocious two-stroke engine in a scooter package requires great deal of skill.

The scooter ditches its stock headlamp for an LED infused unit but the square shape of the casing has been retained. The red and yellow paint job with ‘Gold Flake’ aka ‘Flakes’ branding goes well with the vintage scooter’s original bodywork. 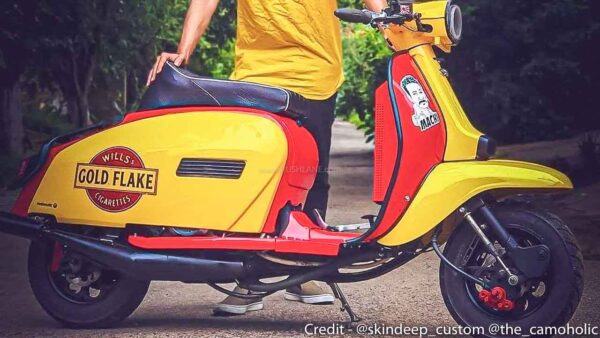