August’20 brought in some good sales numbers for many OEMs. The MUV segment too registered a minor increase in overall sales figures, over the same month last year. This is despite the fact that multiple models from 2019 have been discontinued now.

The best selling MUV in August’20 was the Maruti Ertiga. Ertiga registered a strong growth of 11% over its last year’s sales numbers. XL6 registered a decline of around 22% in its sales last month. Overall, both the models clocked total sales of 11,148 units (9,302 – Ertiga, 1,846 – XL6), which is impressive for the platform and Maruti Suzuki. In the past too, the models have been consistent strong performers, showcasing their popularity in the masses.

Return of the Sub-Urban King

The Mahindra Bolero registered strong demand in August’20 and clocked sales of 5,487 units. It witnessed YOY growth of 37%. Signs of revival in the Rural Economy can be attributed to improved sales figures of the Bolero as it is primarily positioned to cater to customers from sub-urban belts of the country. 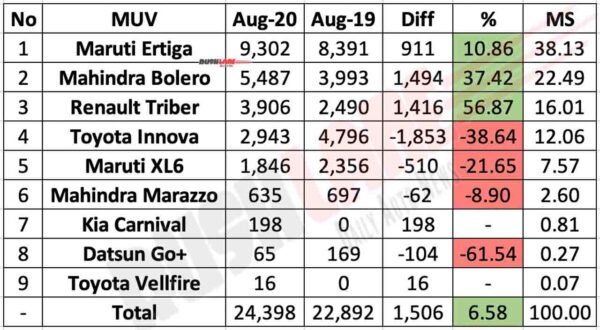 Renault’s Triber has been French Automaker’s latest success story. The model registered an impressive 57% growth over last year and clocked total sales of 3,906 units. After the Duster and Kwid, it is the Tiber which can be considered as a successful product from Renault’s stable.

Toyota managed to sell 2,943 units of the Innova Crysta last month. In the same month, last year, Toyota had dispatched 4,796 units of the Innova, which made it the No 2 best selling car in segment. Aug 2020 saw sales of Innova Crysta declined by 39% over last year. This has resulted in Innova slipping out of the Top 3 names. The Innova and Fortuner are Toyota’s Bread and Butter in the Indian market. Declining sales of Innova should ring an alarm bell at Toyota’s Indian HQ.

In related news, Toyota has blamed high taxes by Indian govt as a result of decline in car sales. Toyota has also announced that they have no expansion plans in India. They will continue to invest in operations at a similar rate as last few years.

Mahindra’s Marazzo’s production has finally restarted, and we can see that some dealer dispatches took place last month. Marazzo’s BS6 upgrade was long overdue and the model landed up clocking 0 sales month-over-month due to the same reason. In August’20, Mahindra managed to sell 635 units of the Marazzo, witnessing a sales decline of around 9% over last year.

Kia’s premium UV offering, the Carnival managed sales of 198 units, which is decent for a vehicle of its class. Toyota’s Vellfire clocked sales of 16 units in August’20.

Datsun’s Go+ was one of the poorest performing MPV. It registered sales of just 65 units, which is way too low for a car of its category. It also witnessed 62% sales decline over last year. Such poor numbers will directly impact the existence of the brand in the country.

Models like Xylo, Hexa, BR-V and Lodgy have been discontinued by their respective OEMs, hence there were no reported sales for any of these models. Despite their sales number in bases, the MUV segment clocked a 3% increase in sales over last year.