Among the many bikers and bikes that have traveled down the highest motorable road in India, the MV Agusta F4 RC could be the most expensive yet. Priced at Rs.50.87 lakhs, the MV Agusta F4 RC superbike has been ridden across the Khardung La mountain pass in the Ladakh region of Jammu and Kashmir by Harish Rossi, a Valentino Rossi fan. Die hard Rossi van, his Facebook profile URL itself reads ‘the indian valentino rossi’.

Khardung La is not only among the highest motorable road in the country but also consists of treacherous terrain. Oxygen levels dip drastically which not only causes difficulties to the rider but also affects the bike performance. The engine requires rich oxygen fuel mix and hence at such high altitudes, the bike’s performance is put to the test. However, the MV Agusta F4 RC proved its worth and the biker was able to complete this treacherous road with ease.

Speaking about the journey, Harish Rossi says, “The final leg of KHARDUNGLA, after no roads i so badly suffered with my neck , back , shoulders , wrist , because it was purely off roading for more than 30kms uphill , altitude varies and it was freezing to -4 degrees where i cant feel my hand and throttle , meanwhile air is too thin so the bike suffers to move with the clutch ,but I challenged myself to do it single handedly , stopped at few places for my own motivation and calmness and finally that relief when u reach the top step its totally worth it.”

Harish Rossi was able to take on this treacherous terrain with ease while creating a record of taking one of the most expensive bikes up to this altitude. What is especially noteworthy is that while most bikes would prefer adventure tourers, Harish has taken his MV Agusta F4 RC superbike on this trip.

The bike also sits on lightweight forged aluminum wheels contributing to its reduced weight. It also gets a race kit consisting of a titanium Termignoni exhaust system and retuned ECU which boosts up power to 212hp. A notable feature of the MV Agusta F4 RC is that it is hand assembled by a team of specialists allowing for top level optimization. Each bike carries a certificate of authenticity showing off its exclusivity and uniqueness making each bike a collector’s item. 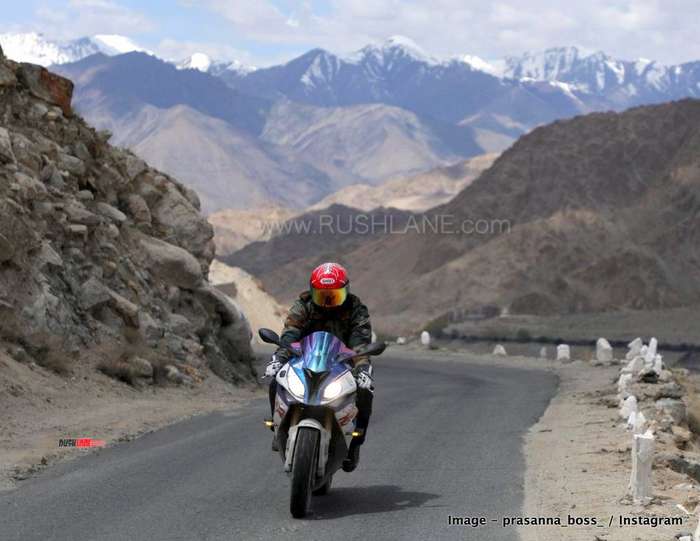 Update – Apart from the MV Agusta biker, there were three more in the group, along with two Toyota Fortuner as support cars. There were 2 BMW S1000RR and GS 1250 Adventure. They started the ride on 16th May from Kanyakumari and reached Khardung La on 28th May. The covered total of 5450 kms in about 12 days.