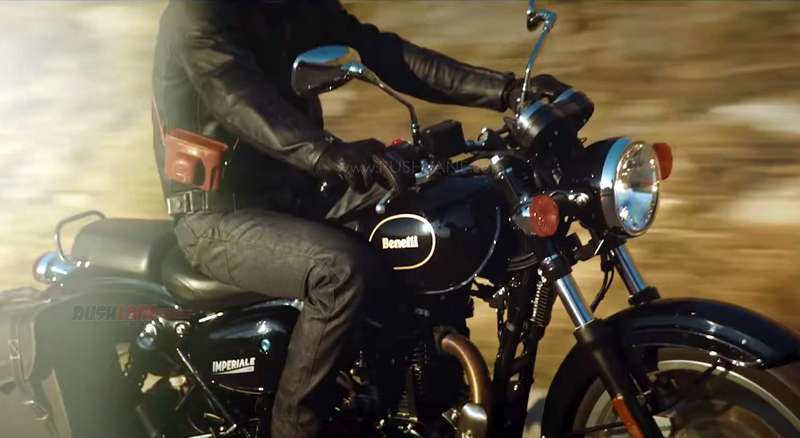 Benelli Imperiale 400 is a retro styled classic motorcycle that will be making its way into India on October 21, 2019. It enters a segment currently commanded by Royal Enfield. Jawa too is there in the segment, but they are yet to make any sales impact.

The company has released a TVC drawing attention to its spirit of freedom. The Benelli Imperiale 400 will be presented in three color options of Red, Black and Chrome. It will come in with retro styling seen in its round shaped headlamp, curved fuel tank, spoked wheels and twin pod instrument cluster.

Benelli 400 receives split flat seats, an analog instrument cluster and will ride on 19” front and 18” rear spoke wheels. Kerb weight will be of 200 kgs while fuel tank will be of 12 liter capacity. Watch the first official TVC video below.

Engine specifications also get detailed with the new Imperiale 400 set to be powered by a 373.5cc, single cylinder, air cooled engine offering 19 bhp power at 5,500 rpm and 28 Nm torque at 3,500 rpm mated to a 5 speed transmission. The engine will be BS VI compliant at the time of launch. Suspension will be via 41mm telescopic forks in the front and twin shock absorbers at the rear while braking will be via disc brakes at either end with dual channel ABS as standard.

The Imperiale will be brought to the Indian market via the CKD route with the company planning a high level of local content. Price of the Imperiale 400 could be aggressive, which will allow it to compete with the likes of Royal Enfield Classic 350 as estimates.

Apart from this, Benelli has also been actively testing the Leoncino 250 and TRK 251 in India. The company has expanded its reach with 9 new dealerships being opened since the start of this year, thus taking total outlets to 19.

The company lineup currently comprises of the TNT300, TNT 600i, and 302R, TRK 502 and TRK 502 X and Leoncino 500 each of which are positioned in a price bracket from Rs.3-6.2 lakhs. Benelli also plans an onslaught into the scooter segment with 150-250cc scooters while over the next three years, they could also venture into the electric two wheeler segment in the country.