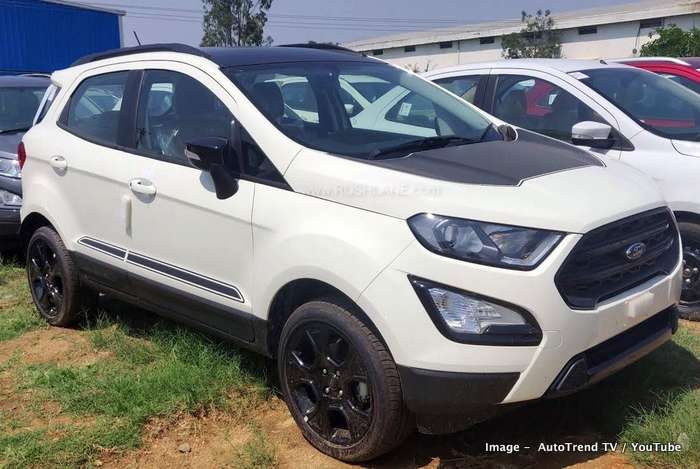 A special edition of the Ford EcoSport is set for launch sometime in June 2019. It has been spied at company dealerships and images have surfaced online sporting the ‘Thunder’ moniker below the EcoSport badge at the rear. The walkaround video by AutoTrend TV youtube channel shows off the exterior and interior updates on this new edition.

Ford EcoSport Thunder Edition as seen in the accompanying video will receive some cosmetic updates that could be offered on multiple variants. It will also be more affordable as compared to its regular counterpart. Price is expected to be Rs.20,000 lower than the regular Titanium variant.

In terms of cosmetic updates, the Thunder Edition of the Ford EcoSport will receive new 17” black alloy wheels, sport tyres, dual tone exteriors and a blacked out roof. It will also get blackened front grille, headlamp cluster and fog lamp bezels. Other feature updates will include new front and rear bumper designs, a larger central airdam and blackened ORVMs along with an all black cover for the tailgate mounted spare wheel. Watch the detailed walkaround video below.

Cosmetic updates will also be seen in its interiors which are done up in a black and beige color scheme as against the all black color scheme seen on the Ford EcoSport. It will also receive faux wooden elements on doors and equipment levels should be the same as those seen on the Ford EcoSport Titanium trim with climate control, keyless entry and Sync2 infotainment system.

There would be no mechanical changes in the Ford EcoSport Thunder Edition. It will continue to be powered by the same 1.5 liter Ti-VCT petrol engine and a 1.5 liter TDCi diesel engine. The petrol engine will be capable of 121 bhp power and 150 Nm torque while the diesel engine will offer 99 bhp power and 205 Nm torque. Both engines get mated to a 5 speed manual gearbox as standard.

The current version of Ford EcoSport is priced from Rs.7.83-11.90 lakhs. The new Thunder Edition is set to be priced lower by Rs.20,000. This will help Ford India boost sales at a time when the EcoSport is the least selling car in the segment.

EcoSport was the first modern compact SUV, which gave birth to the new generation of sub 4 meter SUVs. Post the launch of EcoSport, many car makers launched their version. Maruti got Brezza, Tata got Nexon, Mahindra got XUV300 and Hyundai got Venue. As of now, it is the Brezza which leads the sales chart, followed by Mahindra XUV300, Tata Nexon and Ford EcoSport. But the dynamics is set to change with the launch of Venue.