It was only recently that Hyundai Motor India launched the 2020MY facelifted version of its most premium ICE product, Tucson at a starting price of Rs 22.30 lakh ex-showroom. Compared to popular rivals such as the Jeep Compass, Skoda Karoq and Volkswagen T-Roc, the compact crossover SUV witnesses relatively low demand on the Indian market. However, across the globe, the Hyundai Tucson has always been a successful nameplate for the South Korean automaker.

Sitting below the 2021MY Hyundai Santa Fe that made its global debut earlier this year, the Tucson has been around for more than 16 years. India has received the first- and now, the third-gen Hyundai Tucson. Yet in both cases, the SUV could not meet half the sales returned by lower, more affordable Hyundai models.

The company currently follows a revamped design philosophy which may not impress everyone. There are some good-looking examples under the new aesthetic direction but products such as the latest Santa Fe (major facelift) gives a shock at first glance. The all-new Hyundai i20 would be the first product in India to sport the new approach. 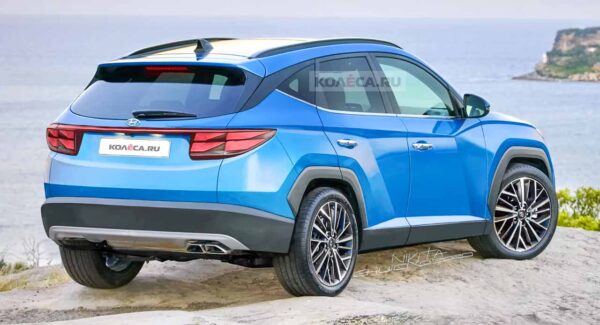 The Tucson is yet to receive Hyundai’s latest visual traits. In the meantime, Kolesa.ru has imagined a 2021MY iteration of the vehicle with inputs from the Hyundai Vision T concept that was showcased at LA Auto Show 2019. Multiple sources claim that the actual fourth-gen Tucson will be heavily influenced by the Vision T concept.

Notable details include the trendy and typical ‘split’ headlamp configuration, LED lighting all around, revamped grille architecture, sharp creases, semi-hexagonal wheel arches, etc. Being an early, unofficial render, it is best not to comment on the powertrain. Still, rumours suggest that the 2021MY Hyundai Tucson would employ a 2.5-litre Theta3 NA four-cylinder petrol engine that powers multiple Hyundai/Kia models at present. The next-gen Hyundai Tucson is expected to arrive on global markets by the second half of next year.