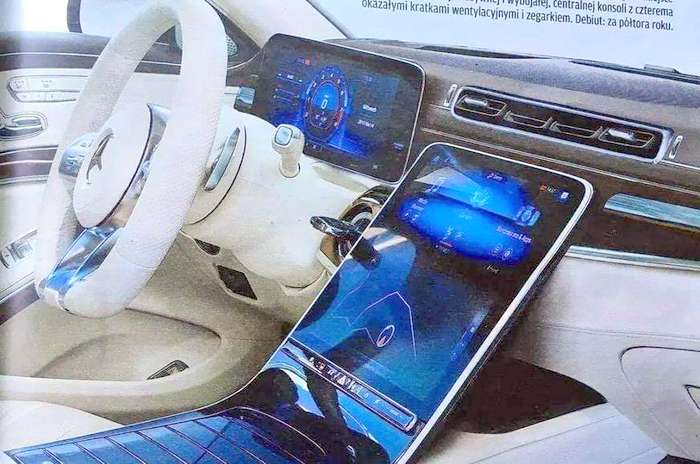 The next generation Mercedes Benz S Class sedan is currently being tested in Europe. Though under heavy camouflage, yet spy shots have shown off several exterior and interior updates. This is the 7th gen S-Class that is being tested ahead of global debut this year. It will replace the 6th gen version, which has been on sale for the past five years.

Interiors too have been completely changed. It sees the minimum use of buttons while the dashboard is dominated by a large touchscreen infotainment system positioned in a vertical format. It is equipped with Mercedes-Benz User Experience (MBUX).

2020 Mercedes S Class spy shots also show a multi function steering wheel and an all digital instrument cluster. Targeted towards customers who like to be driven by a chauffeur, the S Class executive sedan will also sport a host of comforts and luxuries for passengers in the rear seat.

New Mercedes Benz S Class could be offered in two variants – one powered by conventional petrol / diesel engine while the other powered by an electric powertrain. Of the two, the S Class powered by petrol / diesel engines will launch first, sometime in 2020 while the electric variant to follow in 2022. Mercedes S Class electric will get advanced autonomous driving technology, similar to that seen on Tesla cars. It will come with a driving range of 500km.

2020 Mercedes Benz S Class is likely to be showcased at 2019 Frankfurt Motor Show to be held in September this year. It will be a 2020 model and could launch in international markets by the end of this year. Launch in India could take place by early 2020 where it will rival the BMW 7 Series, Audi A8 and Jaguar XJL.