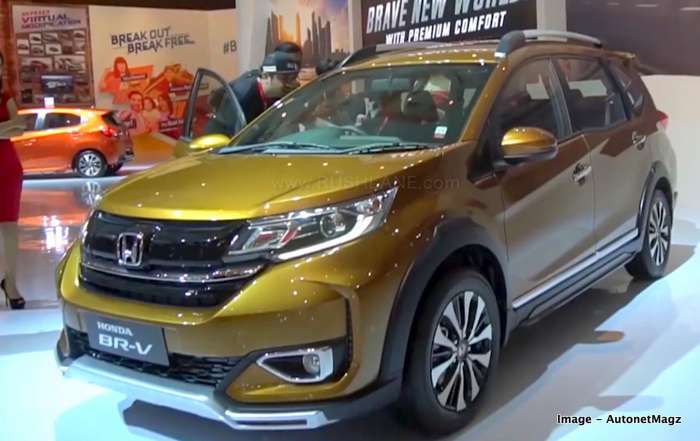 Honda has given its 7 seater BR-V a mid-cycle update. It is on display at the 2019 Indonesia International Motor Show being held from 25th April to 5th May 2019 wherein its new exterior and interior features get detailed.

This is the first update ever since the current BR-V, which was launched in India in 2016. It is a much needed update, especially since sales of the BR-V have been on the decline over the past few months. Monthly average sales stand at around 300-400 units while sales of its stronger rival, Maruti Ertiga, averages at around 7,000 units per month.

Honda BR-V facelift gets an all new front bumper design though its front grille remains unchanged. It now sports new fog lamp housing, faux skid plate and is seen with extensive use of chrome, thus enhancing its premium appeal. The BR-V facelift is also noted with faux brushed aluminum finish in the chin, new headlamp inserts with DRLs and refreshed diamond cut 16” alloy wheels. Design changes to the rear are minimal and restricted only to a tweaked bumper design. The BR-V also sports roof rails and the sides are seen with plastic cladding. Below is a detailed walkaround video of top variant.

The Honda BR-V facelift is also set for launch in India. It could make debut at the 2020 Auto Expo, and launch thereafter. The India spec Honda BR-V gets its power via a petrol and diesel engine option – that includes a 1.5 liter i-VTEC petrol engine offering 119 PS power and 145 Nm torque and a 1.5 liter i-DTEC diesel engine capable of 100 PS power and 200 NM torque. The engines are mated to 6 speed manual transmissions with a CVT offered as an option on the petrol engine.