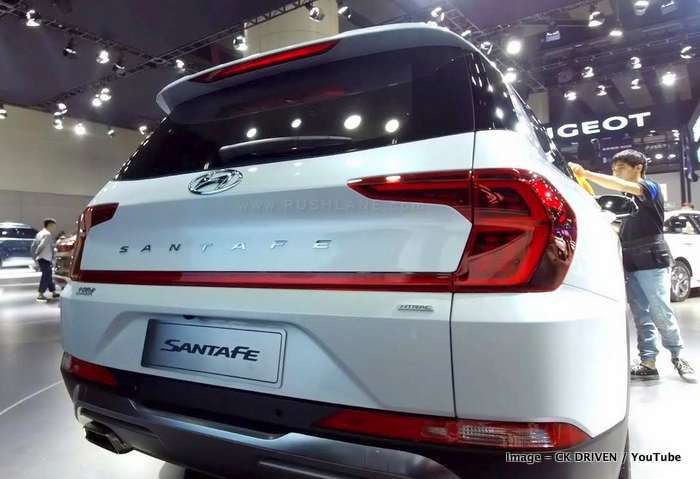 Hyundai Motor Co has revealed a longer version of the new generation Santa Fe in China, at the ongoing 2019 Shanghai Auto Show. This is the 4th generation Hyundai Santa Fe, which has its overall length increased by 160mm as compared to its counterpart in Europe.

Santa Fe LWB has heelbase extended by 100mm to 2,865mm and length to 4,930mm. This Hyundai Santa Fe LWB variant is exclusive for the Chinese market as on date and it is not confirmed if or when it will be offered in markets outside of China.

Hyundai Santa Fe LWB is designed for buyers in China who pay more attention to the rear seat. Hence many automakers design their models with long wheelbase specially for the Chinese market. This was seen in the case of the China specific long wheel base variants – Polo Plus, Jaguar XFL, Volvo S90 L and Audi A6L and Mercedes-Benz also introduced a long wheelbase version of the C-Class that is three inches longer than standard.

The 4th gen Hyundai Santa Fe LWB showcased in China is offered in 6 seater options with captain seats or in a 7 seater variant with bench seat in the middle.  It will see enhanced space both in the second and third row areas. In terms of design elements in the front, the Santa Fe LWB is no different from its regular model. It gets a signature cascading front grille, split headlamps, with LED DRLs at the top and projector headlamps below with fog lamps integrated into the lower bumper. Changes are seen in its rear design with blacked out rear pillar giving a wrap around look to the rear windscreen, an updated tail gate with new bumper, new LED tail lamps and in integrated spoiler.

Interiors also follow the same design as seen on the regular model but the LWB variant gets more technology. The China specific Hyundai Santa Fe gets a new infotainment system with updated software, Hyundai’s biometric authentication technology with finger print sensor to start the engine in the place of the push button. It also receives an ultrasonic sensor based system to alert the owner if a child or pet is left in the car.

In India, the South Korean automaker Hyundai plans 6 new launches. The Venue SUV will be revealed later today and will be followed by 5 more utility vehicles in the next 24 months. These will include the Kona electric SUV, new gen Hyundai Creta, Hyundai i20 Cross hatch (Active), next gen Santa Fe, Tucson, etc.