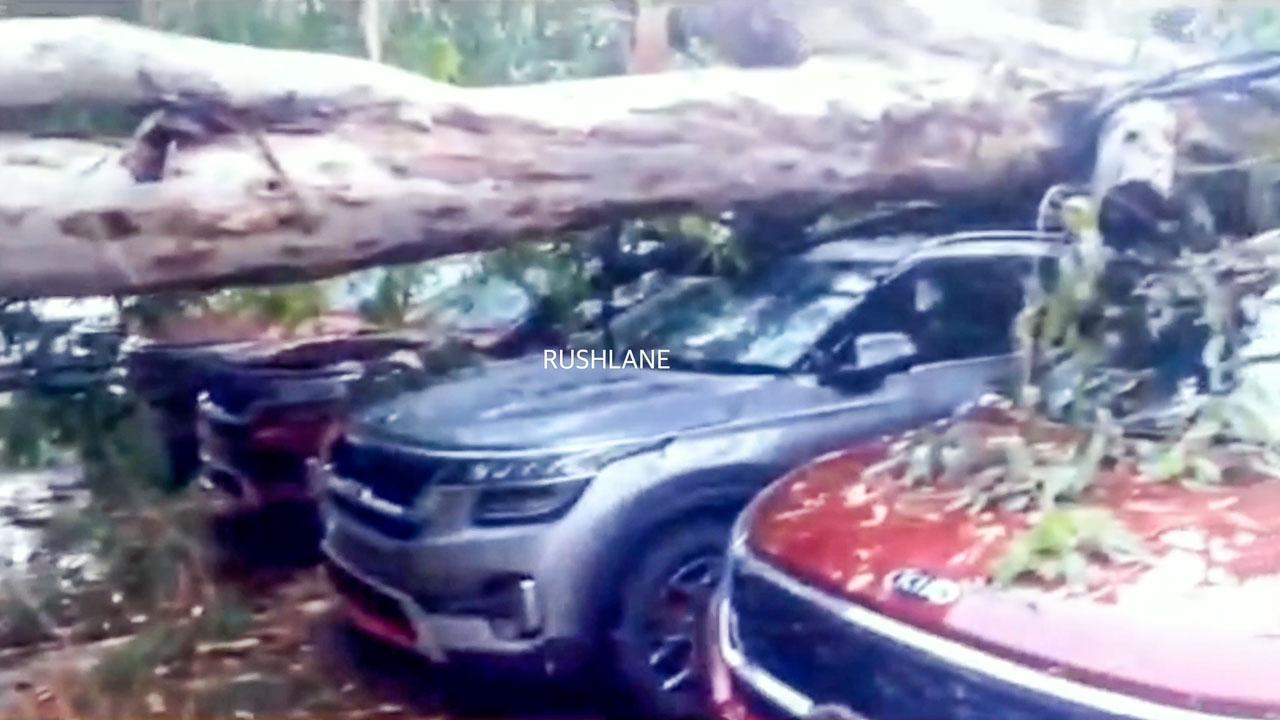 As heavy rains and hail beat down on North West, North and Central Delhi and the Ghaziabad area causing havoc

Sudden dust storm followed by heavy rains and hail lashed several parts of Delhi and Ghaziabad causing wide scale damage to life and property. The dust storm which started at around 6.00 pm was quickly followed by rain and hail storm sending many trees crashing down across roads.

Nothing was spared. Thousands of cars, bikes, vehicles, which were parked on the road have been damaged. Now, a video shared by automotive enthusiast Neelesh Bajaj shows a completely damaged dealership stockyard of a Kia dealer in the region.

Multiple brand new Kia Seltos SUVssuffered under the wrath of nature as several trees were uprooted which came down on the cars parked in the open. The rains came in without warning leaving and in the later part of the evening as staff had left for the day and hence the damage was profound. The accompanying video shows off several white, black and red colored Kia Seltos and Carnival models being damaged by the falling trees.

This was a rather inopportune time for nature to show its wrath. This damage to several Kia models comes at a time when dealerships have just been opening up after the lockdown period and at a time when the company has been seeing next to zero sales in the country over the past two months.

Kia Seltos is currently one of the best selling cars in the country. With average sales of about 10,000 units per month, there are thousands of customers who are waiting to get delivery of their Seltos. But with lockdown enforced in many big cities of the country, deliveries are at a standstill.

The dealer stockyard in question, was planning on delivering the new Seltos SUVs to respective customers in the coming days as lockdown in Delhi is starting to ease. But with the cars now damaged, it remains to be seen what will be the outcome.

Kia Seltos SUV competes with the likes of the new Hyundai Creta, Nissan Kicks, etc. Offered in Tech Line and GT Line, the Kia Seltos is priced between Rs.9.89-17.34 lakhs and is powered by petrol and diesel engine options. It has seen sales cross the 81,000 unit mark since launch and has been the highest selling SUV in India for the third month in a row with 7,466 units sold in March 2020. Seltos sales stood at 14,024 units in February 2020 and 15,000 units in January 2020.