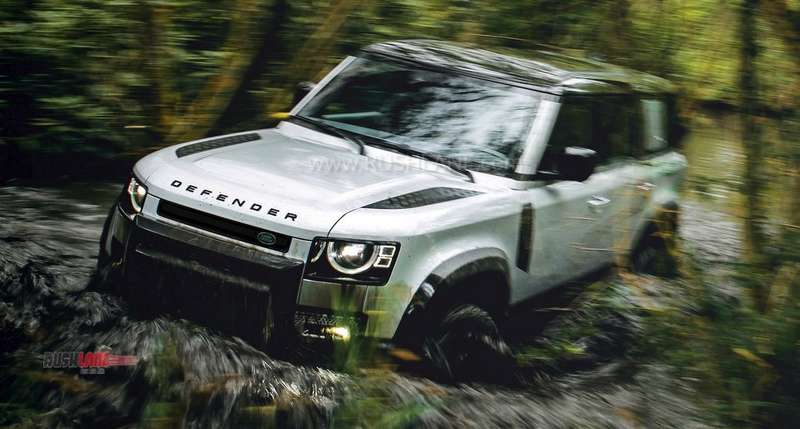 The new Land Rover Defender, which traces its legacy to World War II, has made its debut at the 2019 Frankfurt Motor Show. It is presented in 6 variants of Defender (base), S, SE, HSE, First Edition and top spec X. it will be seen in two wheelbase options of 90 (3 door) and 110 (5 door) and in petrol and diesel engine options.

Sales of the 2020 Defender will commence with the 5 door versions while the 3 door Defender will enter show rooms from later this year. Launch in India is expected from early 2020 wherein the new Defender SUV will be seen as a direct rival to the Jeep Wrangler.

The new Land Rover Defender exudes power and performance, character and toughness from every angle that it is viewed. It comes in with the most outstanding of features and all terrain capabilities with the latest in on road technologies and yet at the same time offering unmatched cabin comforts. Watch the new Defender show its prowess off the road, in the official TVC video below.

The new Defender commands a total payload of 900 kgs and gets a static roof load of 300 kgs, dynamic roof load of 168 kgs and towing capacity of 3,720 kgs. It is capable of wading depth of 900mm making it ideally suited for cross country adventures. It also gets 291mm of ground clearance along with approach, breakover and departure angle of 38, 28 and 40 degrees respectively.

The interiors will be seen with a new walnut dashboard design, heated leather wrapped steering wheel, heated and cooled front seats in a 14 way adjustment and manual headrest along with ebony headliners and heated rear seats.

The Defender gets a multifunction steering wheel, 12.5” instrument cluster, head up display, 10” PiviPro touchscreen with Apple CarPlay and Android Auto and a 700W Meridian sound system. Over-the-air updates include 14 individual modules offering the latest in software at all times.

The 2020 Land Rover Defender could also make its presence felt at the 2020 Auto Expo next year with launch in the country soon after. It was also spied testing in India earlier this year and has also been listed on the Land Rover India website. Launch in India will see the new Defender compete with the Jeep Wrangler.