From the looks of it, Mahindra’s new subcompact crossover prototype appears to be a potential successor to the KUV100

Earlier this month, Mahindra & Mahindra finally unveiled the all-new ‘2020 Thar’; marking an end to one of the longest road-testing phases in recent Indian automotive history. The second-gen Mahindra Thar will be launched on October 2nd or the Indian automaker’s Founder’s Day. It will be available in both petrol and diesel formats with optional automatic transmission. 4WD powertrain remains standard.

On paper, the offroader has definitely lived up to its hype but has a fair amount of shortcomings in terms of aesthetics, equipment (minor ones amid a sea of impressive extras) and practicality. The final market-ready version might receive some crucial tweaks. Prices are expected to be substantially more than its phased-out BS4 avatar considering the level of improvement it carries.

Over the last couple of weeks, Mahindra has shared multiple promotional videos of its latest product on social media. Among them, the video titled ‘Built to Explore the Impossible’ is particularly interesting. Whilst showcasing the new Mahindra Thar’s facts and figures, an unprecedented small SUV (or sub-four-metre compact crossover) prototype makes an appearance. Skip to 0:45 in the video attached below:

Mahindra Thar TVC was shot inside the company plant, where other upcoming Mahindra cars are also on test. This small SUV probably missed the TVC editor’s eye, and has now been officially leaked from inside the plant.

What could the ‘mystery test mule’ be?

Despite being way behind the main setting, it is evident that the vehicle spans below four metres in length. Since the company has already got the Mahindra XUV300 as a strong player in this segment, we suspect this is a potential replacement to the KUV100 ‘micro-SUV’ (more like a raised hatchback with bulkier fenders). Updated to BS6 specifications, the current-gen Mahindra KUV100 NXT is certainly not the most desirable product in its price category. 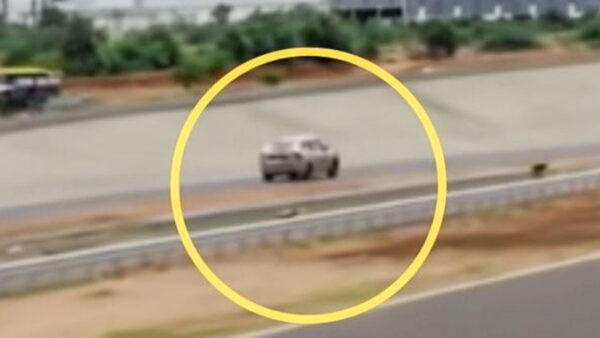 This assumption likely makes it a rival to Tata Motors’ upcoming HBX subcompact crossover. Showcased at Auto Expo 2020 as a concept, the Tata HBX sits below the Nexon. Demand for “compact SUVs” or taller hatchbacks marketed as SUVs have been immense lately. Kia Motors India is almost ready with its all-new Sonet while Renault and Nissan are working on the Kiger and Magnite, respectively.

The present Mahindra KUV100 NXT comes only with a BS6-compliant 1.2-litre NA three-cylinder petrol engine good for 82bhp and 115Nm of torque. This is mated to a 5-speed manual. However, all future Mahindra and Ford petrol products would come with Mahindra & Mahindra’s mStallion turbo petrol range. In this case, it could be a detuned version of the unit powering the Mahindra XUV300 Sportz edition (1.2-litre mill churning out 128bhp and 230Nm).