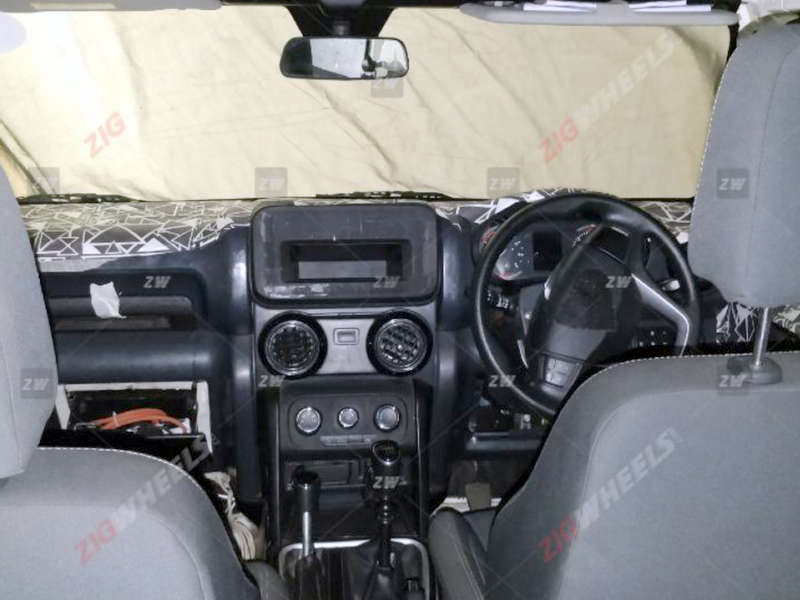 The next generation Mahindra Thar is currently undergoing intense testing regime ahead of its launch which is expected at the Auto Expo 2020. So far, the spyshots showed us only the exterior but the latest set of photos by Zigwheels, reveal the near-production-ready interior.

As expected, the new Thar’s dashboard has undergone considerable changes which are aimed at making the SUV a bit upmarket. First of all, the off-roader now adopts all-black color theme opposed to its predecessor’s beige dashboard. The multi-function steering wheel with silver insert has been borrowed from the TUV300.

The 2020 Mahindra Thar also ditches its tri-pod instrument console for a bi-pod unit with a prominent multi-info display in the middle. The center console carries forward the layout but receives new AC controls. Mahindra has also moved the front passenger grab handle a bit to make space for the airbag. The SUV also gets front power windows. 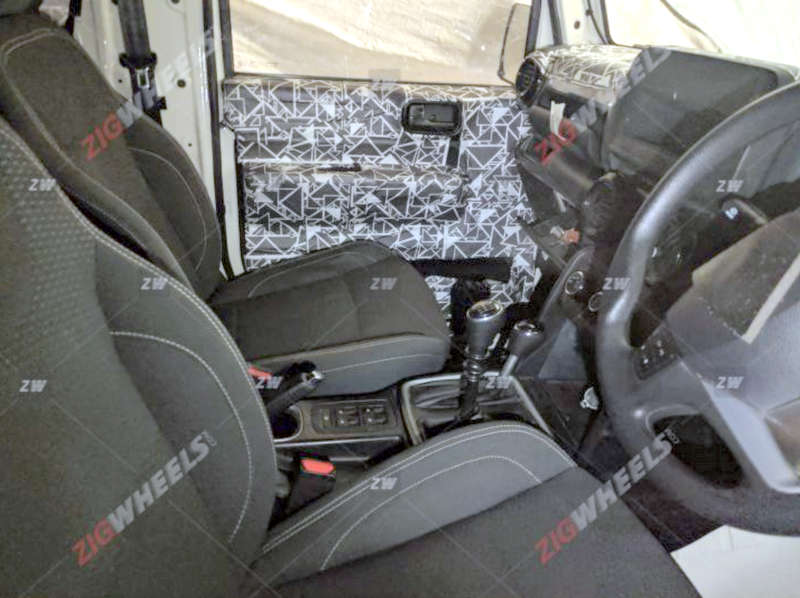 The interior spyshots also confirm that the new Thar will employ a 6-speed manual transmission instead of the current car’s 5-speed unit. A low-transfer case with dedicated lever is also on offer. While there is a provision to mount an audio system, the Thar seems to be devoid of one as a standard fitment. We think a touchscreen infotainment system in the fully loaded variant would be nice. Dual airbags, rear parking sensor, passenger seat belt warning, speed alert system and ABS will be offered across the variant lineup.

The Thar also appears to be featuring new and better contoured seats with sizable side bolstering. The seats are upholstered in black fabric with white contrast stitching. In a nutshell, the new Mahindra Thar’s cabin is certainly an improvement over the model it replaces.

The technical specifications are still under wraps but we expect the current 2.5-liter CRDe diesel engine which produces 105 hp to be retained with tweaks to comply with BS-VI standards. The aging 63 PS 2.5-liter DI unit is likely to hang up its boots. There is also a rumor that a new 2.0-liter engine is on the cards.

The Thar will continue to be a hardcore off-roader with the top-end variant featuring rear locking differential and impressive approach and departure angles. Spyshots of the prototypes suggest that the next iteration has grown in size.

The 2020 Mahindra Thar is expected to have a noticeable inflation in its price tag. The existing Thar CRDe is priced at Rs 9.49 lakhs (ex-showroom, Delhi).