In its updated avatar, Maruti Baleno is available in four variants – Sigma, Delta, Zeta and Alpha. 2019 Baleno facelift retails at an entry price point of Rs.5.45 lakhs and ranges to Rs.8.77 lakhs for the top trim. Sold at NEXA showrooms, 2019 Maruti Baleno facelift has been available in Pearl Arctic White, Premium Silver, Nexa Blue and Autumn Orange colours. The two new colours on offer are Phoenix Red and Magma Grey.

Engine updates are zilch, with updates limited to the cosmetic front. As such, Baleno facelift continues to get powered by the same 1.2 litre, 4 cyl petrol engine returning max power of 83 hp and 115 Nm torque as with the previous model. Fuel efficiency continues to be listed at 21.4 kmpl as per ARAI. 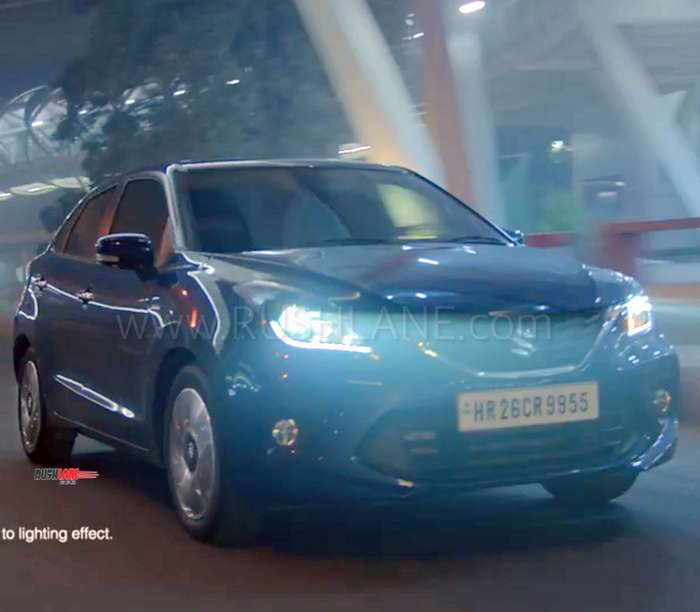 The 1.3 litre, 4-cylinder diesel engine returns 75 hp peak power and 190 Nm torque. ARAI certified mileage is pegged at 27.4 kmpl. Both engines are mated to a 5 speed manual gearbox. For the petrol engine, there’s a CVT automatic option. Baleno facelift matches Hyundai i20, and Honda Jazz in its segment, and awaits the Tata 45X launch.

Following new Maruti Baleno launch yesterday, the automaker has now released a TVC. There’s nothing out of the ordinary in the visuals except the usual actor glamour shots and car footage combined to showcase a few of the family hatchback’s features.

The major change is the remodelled bumper and grille. Additionally, there is now LED headlight, to provide an updated feel to the hatchback. The fog lamps’ design is also expected to change, and vertical housings for them could help the Baleno look a lot more aggressive. Alloy wheel design is also updated, as changing the wheel design during a face-lift is one of the easier things to do for an OEM.

On the Interiors front, changes minimal. Baleno already has an upmarket cabin and Maruti might just add in a few chrome/wooden bits to provide a refreshed look to it. Upholstery options for the seats are also changed to give the 2019 model a distinctive look. Dashboard has an updated touchscreen infotainment system.

While a Baleno update was expected, considering it’s been more than 3 years since launch, it was most unexpected that the company would launch two new updates so close to each other. Only last week, MSIL launched the 2019 WagonR in its entry level segment.

Following poor performance by the auto industry in Q3 of FY19, MSIL would want to capitalise on Q4 FY19 to improve sales for the FY on the back of both its January launches. For the FY, MSIL has reduced it’s sales growth forecast by 8 percent.