Ahead of its launch, second-gen Maruti Suzuki Ertiga interiors have been revealed in new spy shots. Maruti dealerships across the country have started getting the upgraded Ertiga, which will be officially launched on November 21, 2018. 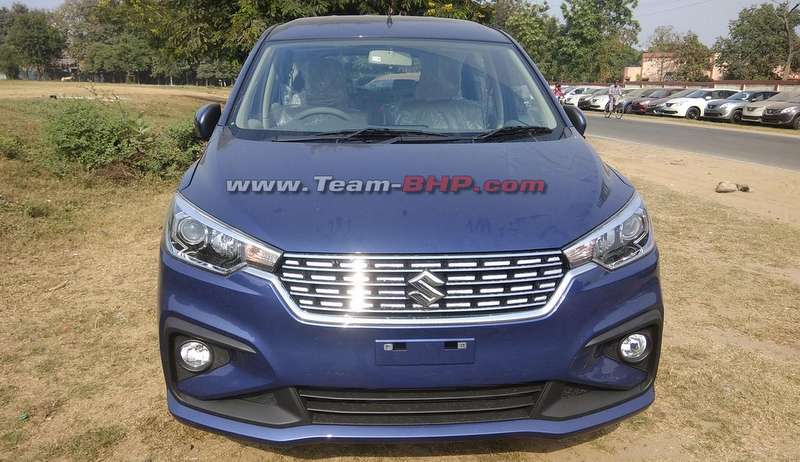 New set of images reveal some interesting details about interiors of 2018 India-spec Ertiga. Some new features have been introduced whereas others are the same as the existing model. For example, new Ertiga has beige themed interiors, just like its predecessor. Other key features that have been carried forward include the steering wheel and front seats.

Some features have been borrowed from other Maruti cars, for example, faux wood panelling on the dashboard that is quite like Dzire. One of the key additions is Maruti’s SmartPlay infotainment system, which looks impressive. New Ertiga has an eight-seat configuration, which makes it suitable for tours and travel companies and large families.

Top trims of new Ertiga have automatic climate control, and dedicated USB hubs and 12V ports for front row passengers. A dedicated 12V socket for charging mobile devices is also there in second row. Second and third row has roof-mounted blower, which is also there in the existing model. Top-spec trims of 2018 Ertiga have engine start/stop feature and steering mounted audio controls.

2018 Maruti Ertiga will have a new petrol engine, the K15B 1.5-litre, four-cylinder unit that makes 103 bhp at 6,000 RPM and 138 Nm at 4,400 RPM. Existing Ertiga has a 1.4-litre engine. New petrol engine is mated to a 5-speed manual or a 4-speed automatic transmission. New K series petrol engine utilizes Maruti’s Progressive Next Generation Smart Hybrid technology, which is designed to improve driving dynamics and reduce fuel consumption. New Ertiga diesel variant will continue to use the existing 1.3-litre turbocharged engine that makes 90 PS power and 200 Nm torque. Diesel engine will also get the SHVS tech.