New Maruti Swift, WagonR, Alto discounts of up to Rs 1 lakh this Diwali 2018

With the festive mood gaining momentum, automakers are aiming to make a killing in the coming months. As the competition gets hotter, automakers are trying to outdo each other by offering various freebies and huge discounts. The intention is also to dispose of unsold inventory, as new variants will be launched during the festive season. Discounts can make a huge difference to sales, especially in the price-sensitive hatchback segment.

Even market leader Maruti Suzuki is offering various benefits and discounts on its hatchbacks, just like its rivals Hyundai, Ford, and Datsun. Here’s a list of Maruti Suzuki hatchbacks that are currently being offered with discounts and benefits.

Maruti Suzuki Wagon R – Wagon R AMT variant is being offered at a discount of up to Rs 1 lakh. Top-end variants have undergone a makeover and they now have a stylish front fascia. These are being offered with benefits of up to Rs 75,000. Discounts are also available on CNG variants of Wagon R, but the amount is relatively less and based on availability.

Maruti Suzuki Alto K10 – This is especially designed to zigzag through busy urban roads and it competes with the likes of Renault Kwid 1.0 and Datsun Redigo 1.0. It derives its power from a small, yet powerful 1-litre engine that can also be seen in Wagon R and Celerio. A 5-speed AMT on the Alto K10 makes driving a pleasure on busy streets. In case of automatic variants of Alto K10, dealers are offering discounts of up to Rs 85,000. For manual gearbox trims, discounts are up to Rs 75,000.

Maruti Suzuki Celerio – This is available in both a standard hatchback version and a slightly larger cross-hatch variant CelerioX. Celerio competes with the likes of Tata Tiago whereas CelerioX’s rivals include Tata Tiago NRG. However, both variants have the same K series 1-litre engine that’s mated to either a manual or AMT transmission. Discounts and benefits worth Rs 85,000 are available on Celerio and CelerioX at specific dealerships. 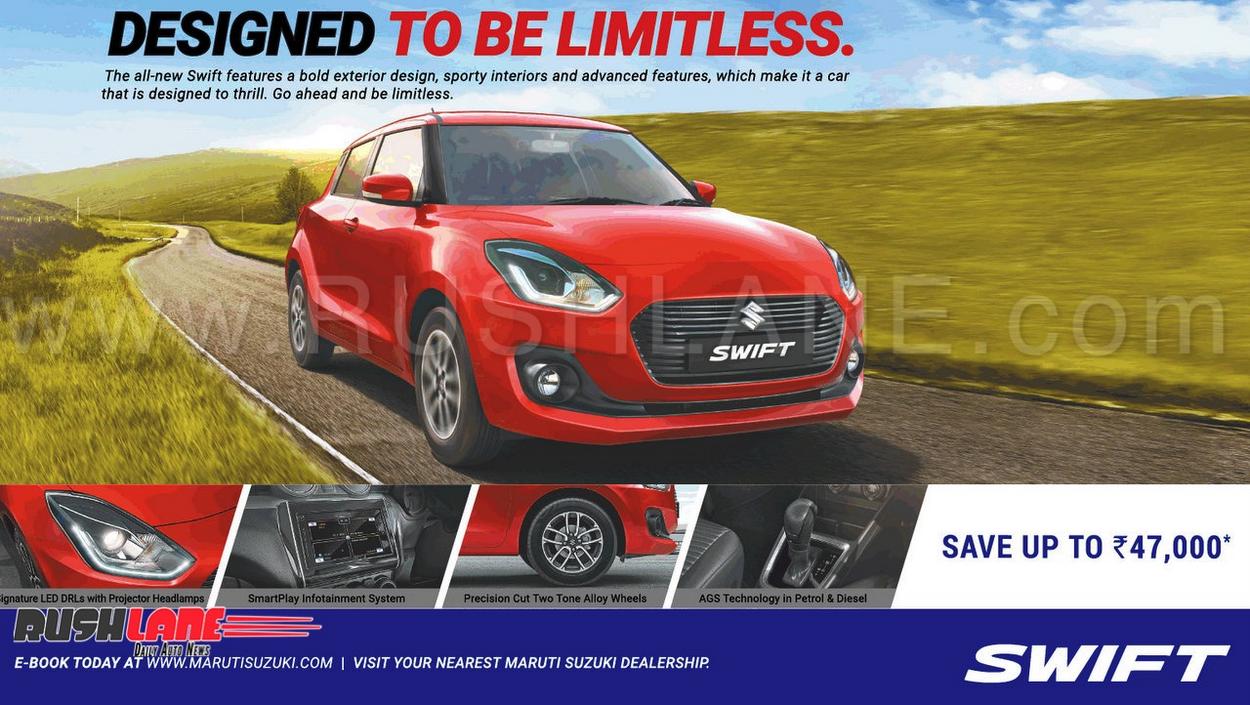 Maruti Suzuki Alto 800 – A bestseller and the smallest car in Maruti’s portfolio, Alto 800 is currently available with discounts and benefits worth around Rs 65,000. Alto 800 gets its power from a 48hp, 796cc, three-cylinder petrol engine that’s mated to a 5-speed manual transmission. Alto’s primary competitors are 800cc Redigo and Kwid.

Maruti Suzuki Swift – All-new Swift has been witnessing brisk sales since its launch, but discounts and benefits of up to Rs 47,000 are still being offered by dealers. Swift is powered by an 83hp, 1.2-litre petrol and a 75hp, 1.3-litre diesel engine, with options for both 5-speed manual and 5-speed AMT. AMT was also recently introduced in top-end Z+ trims. Swift primarily competes with Hyundai Grand i10.