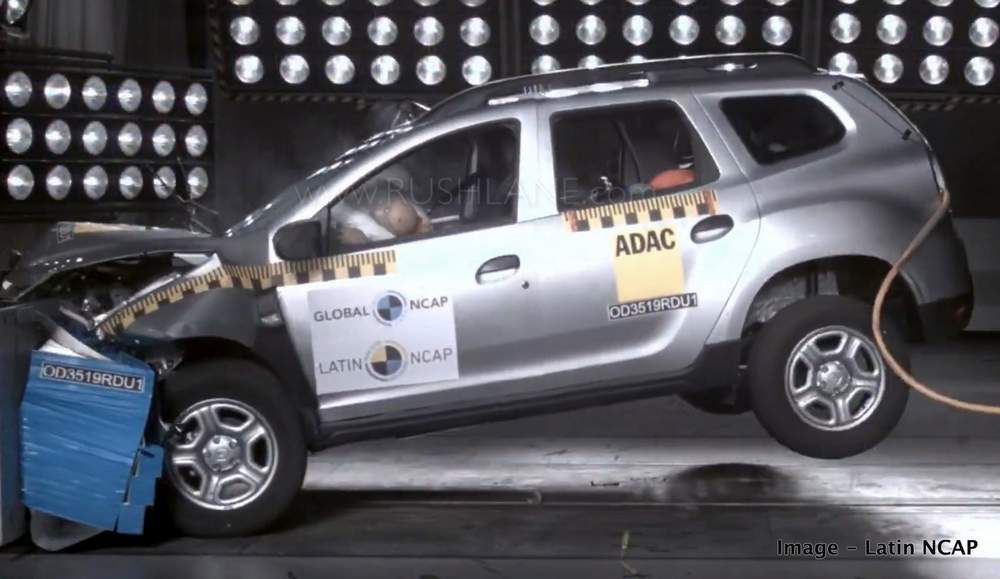 The latest iteration of Renault Duster (marketed under Dacia brand in some international markets) which is manufactured in Colombia, Brazil and Romania scored 4-stars for adult occupant safety in the recent round of Latin NCAP crash tests. The popular low-cost crossover managed to score 3-stars for child occupant safety.

Based on the results, Latin NCAP observed that the new Renault Duster structure was unstable during the frontal crash test and could not withstand further loadings. The SUV’s structure also showed ‘relevant intrusion’ in the side impact test and the testing body says that was not expected in such a new version of a car.

The unit tested was Romanian-made version which was imported to Chile. Latin NCAP will test locally made versions as and when they become available. Below is the crash test video.

The child dummies found their heads impacting the interior of the vehicle which indicates the probability of injuries in the even of a crash. Noteworthy safety features offered are standard dual front airbags, Electronic Stability Control (ESC), ISOFIX mounting, top tether anchorages (on rear outward seats).

India did not get the new gen Renault Duster above. What India got was a facelift of the same gen Duster. This generation of Duster had failed crash test in 2017, which was undertaken by Global NCAP. Today, Global NCAP is going to reveal crash test results of 4 made in India cars. The names of these 4 cars are not revealed as of now.

Speaking about the facelift, it comes with 25 changes including new headlamps, grille, bumpers, wheels, colour option and so on. The interior received revised AC vents and an updated infotainment system with Android Auto and Apple CarPlay.

Once the BS6 emission norms kick in on April 1, 2020, the 1.5-liter diesel engine is expected to be retired. The aging motor would warrant extensive and expensive modifications to comply with the stringent norms, thus making it economically unviable.

From this month, the Indian government too has made crash tests mandatory for all cars sold in the country. The new Bharat New Vehicle Safety Assessment Program (BNVSAP) regulations aimed at reducing the road fatality in the country significantly. The results of popular vehicles are expected to be released in due course.