The Royal Enfield KX bobber concept which world premiered at EICMA 2018 in Milan is heading for production as evident from this video of a prototype testing in public. Images are credit to Karchick Jay. The test mule was devoid of heavy camouflage and looks almost production ready although some components could change before the bike meets assembly line.

From what we can see, Royal Enfield has stuck to the concept’s main design traits such as a low slung profile, long wheelbase, alloy wheels, circular headlamp and slender fuel tank. The test mule seems to be using a make-shift fuel tank but we expect the final production version to sport a new unit similar to the one on the concept. While the KX Concept adopted a Bobber look with a single-piece saddle, the production version adopts a more practical seat to accommodate a pillion rider as well.

Another important thing to note is the front suspension. The KX Concept was showcased with an unconventional girder type front suspension but in its production guise, the new twin-cylinder Royal Enfield cruiser employs an USD fork (the only RE to do so). The retro-classic motorcycle specialist has opted to use conventional twin shock absorbers at the rear.

The new Royal Enfield cruiser is powered by a twin cylinder engine which appears to be based on the 650 cc unit that serves the Continental GT 650 and Interceptor 650. At the time of KX’s debut, the company hinted that the production model, if given the green light, would be featuring a larger engine displacement worthy of a flagship product. 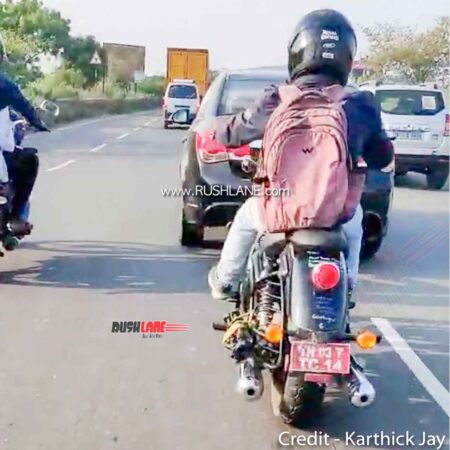 The KX Bobber concept employed a 834 cc air-cooled engine and hence, it is reasonable to expect the production version to have a higher displacement than the existing 650 Twin. However, given that the prototype only gets a single disc at the front, we don’t expect the final power output to be drastically higher than that of the 650 cc engine, irrespective of the new displacement.

Royal Enfield has been busy working on coming up with new generation models of its single-cylinder family which will include a new model named Meteor. We expect the brand to kick start a product blitzkrieg starting from early 2021.

The new twin-cylinder Royal Enfield cruiser is expected to be ready towards the end of next year as the brand’s new flagship. With Harley Davidson reportedly planning to wrap things up in India, the new Cruiser could hit the ground running without any direct challenger.