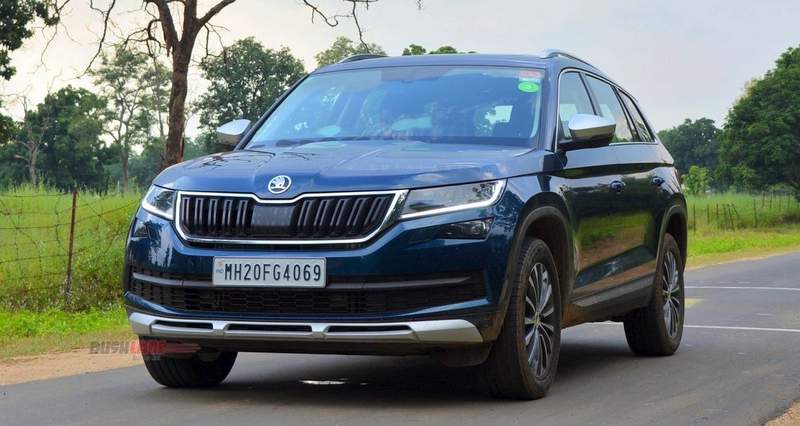 It has been around 2 years since Skoda launched the Kodiaq in the country. Up until recently, the Kodiaq was available in 2 trims, the entry-level ‘Style’ and the more premium ‘L&K’ variant. However, Skoda felt that there was still an opportunity to provide something more under the Kodiaq tag and hence Skoda recently introduced a third trim, the off-roading focused Kodiaq ‘Scout’.

We were recently invited by Skoda India to Nagpur to experience the Kodiaq Scout. In the entire day, we drove from Nagpur to the Pench Tiger Reserve and returned back, covering a little over 200 odd kms in the entire day.

Well, before we dive into the specifics, we would first like to talk about the differences which are there in the Scout viz-a-viz the other trims of the Kodiaq. In Kodiaq’s line-up, the Scout sits between the ‘Style’ and the ‘L&K’ trims. As far as pricing is concerned, the Scout costs INR 33.99 lakhs, making it more expensive by a lakh than the ‘Style’ trim and around INR 2.75 lakhs cheaper than the ‘L&K’. 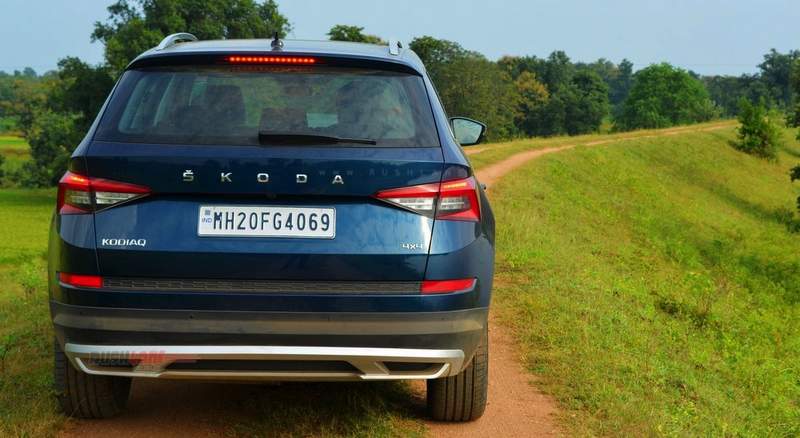 So, what does it get additionally? Well, technically the main highlight of the ‘Scout’ trim is the ‘Off-Road’ mode which is provided as an additional feature when compared to the other two trims. Surprisingly, TPMS (Tyre Pressure Monitoring System) is also available only on the Scout and even the L&K misses out on the same.

As far as looks are concerned, there are some key distinctive design elements on the Scout. The exterior-list includes a silver front spoiler, 18-inch dual tone anthracite Trinity alloy wheels, silver roof rails, silver ORVMs, Scout badging on the front fenders and silver highlights on the rear bumper.

On the inside, it gets wooden finish on the dashboard (along with a Scout badge), black alcantara leather upholstery (with Scout inscription on the seats) and an additional ‘OffRoad’ mode button near the gearlever. Apart from the highlights mentioned above, the Scout is basically a regular Kodiaq. 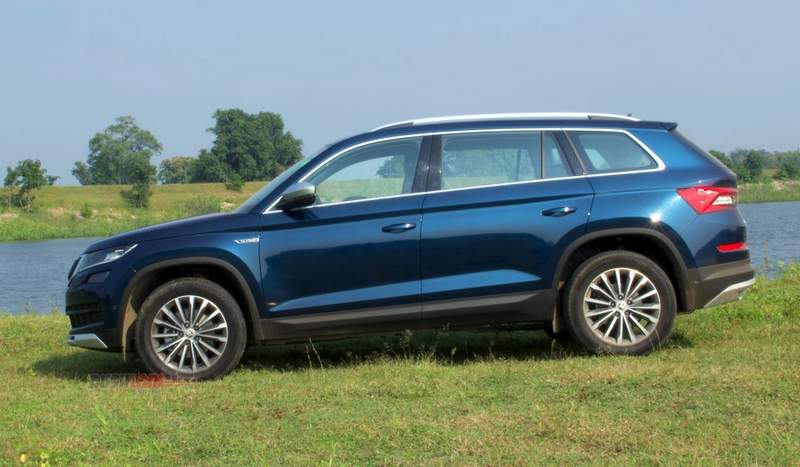 Looks – The Scout looks similar to the other trims of the Kodiaq, except the subtle differences which we just mentioned. The Kodiaq Scout carries the quintessential Skoda family design language and manages to look sharp and butch. Road presence is also good, however if you were to compare it with the likes of its body-on-frame counterparts like the Fortuner or Endeavor or Alturas G4, it looks relatively small.

If we were to pick our favorite element from the exteriors, then it would be the all-LED headlamp + DRL setup which looks absolutely stunning! Another change which can be noticed is that now the Kodiaq comes with ‘SKODA’ lettering on the boot, instead of the Skoda logo which was available on the Kodiaq till now. This update isn’t restricted to the Scout alone, infact, all variants of the Kodiaq will be now be receiving this design change. 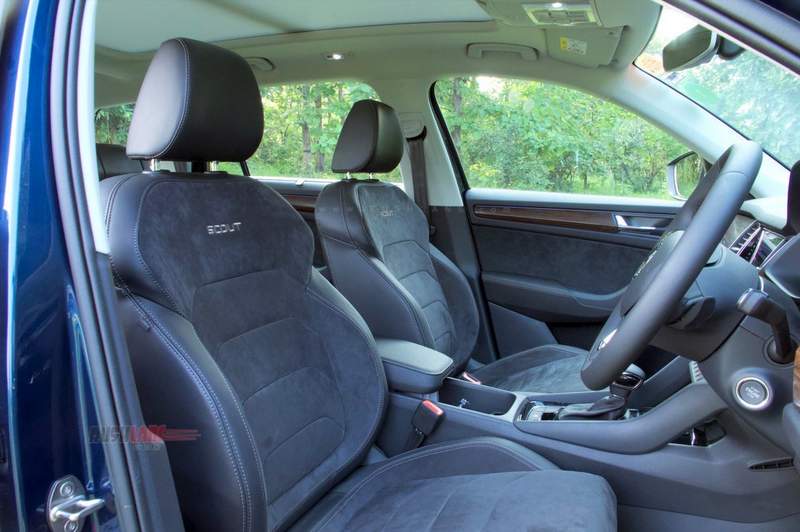 Interiors – On the inside, the Scout trim has an all-black theme. As mentioned earlier, the seats and some sections of the door-pads get alcantara leather, which further adds in a premium feel to an already rich cabin. Quality of materials is top-notch and you get soft-touch plastics all-around.

The equipment list on the Scout is more expansive than one found on the ‘Style’ trim and that means it gets a long list of creature-comfort features. As a customer, you get a 3-zone climate control system, a panoramic sunroof, a 20.32 cm touchscreen infotainment system, an impressive 10 speaker Canton sound system and much more. Things which you miss out when compared to the L&K variant are stuff like a ‘Virtual Cockpit’ and a 360-degree surround view camera. However, there are certain bits too which you might miss, like ventilated seats which are not available across the Kodiaq’s lineup. 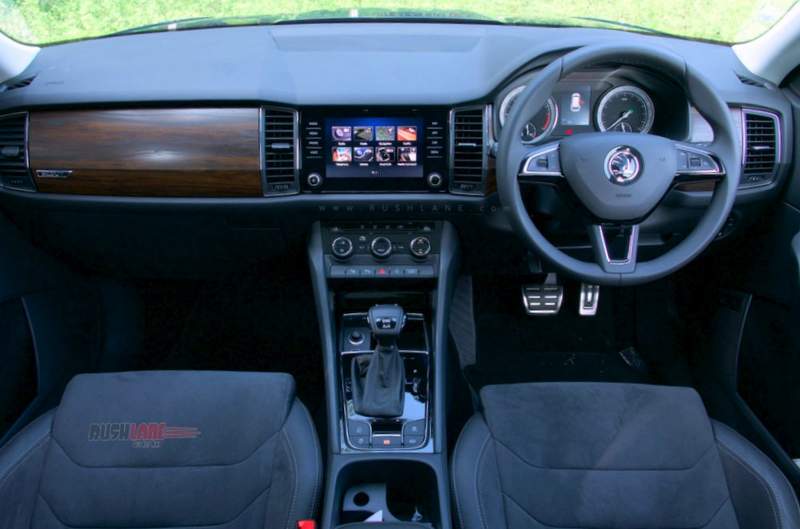 One department where the Kodiaq really shines apart is the seating comfort, especially with the ‘Power Nap Package’ on the second-row seats. This includes soft blankets (neatly tucked-in pouches mounted on the front-seats’ headrests) and special second-row headrests which provide you 3-way comfort. Front-seats are also well-placed (which are 12-way power adjustable, BTW) and the driving position provides you a good commanding view of the road.

Third-row seating is a little tight, however average sized adults can comfortably plan on short-distance journeys in the third-row, with an emphasis being on ‘short-distance’. 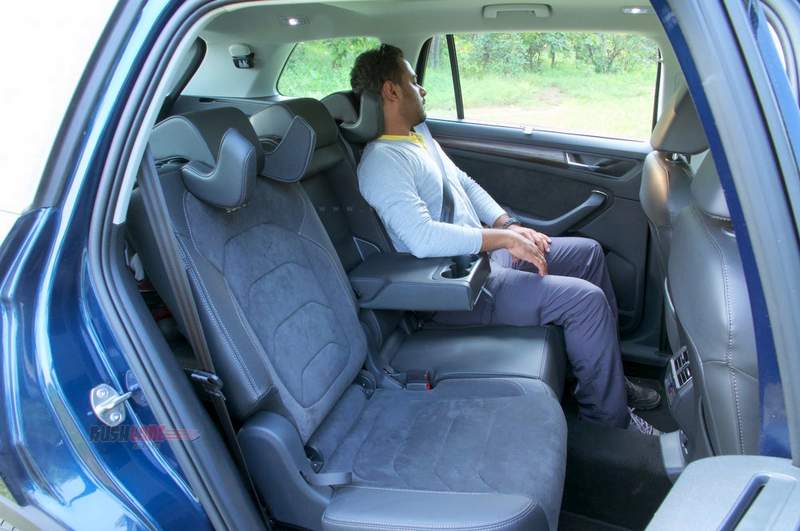 Clever Touches – Like before, the Kodiaq comes with a tonne of ‘Simply Clever’ features. The list includes a removable LED flashlight in the boot, 2 Skoda branded umbrellas in the front doors which are placed in cubby holes (along with a smart drain which takes the water on the wet umbrellas away from the cabin), a smart voice enhancer system which catches your voice from the front seat and sends it across to the rear via the speakers, so that you don’t have to put in extra efforts to make sure that your voice reaches the passengers in the rear and much more!

One feature which we certainly missed was the automatic rubber door protector cladding which was earlier available on the Kodiaq. Not sure why has Skoda decided to discontinue a very useful addition. 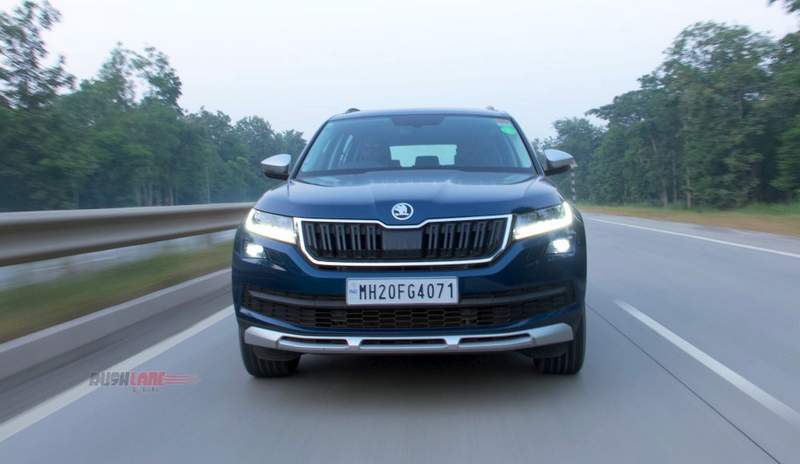 Powertrain – The Scout gets the same powertrain as the regular Kodiaq. The 2 litre TDI motor produces 150 PS and 340 Nm of max torque. It gets paired to a 7-speed DSG gearbox and the power is transmitted to all the 4 wheels via the 4WD setup.

The entire Kodiaq range gets different driving modes – Normal, Eco, Sport, Snow and a customizable Individual mode. The additional ‘Off-road’ mode on the Scout is basically a hill descent assist which helps you while you are coming down a slope (works till 30 kmph).

The motor is decently powered however it doesn’t provide a lot of excitement as such. The gear shifts via the DSG gearbox are smooth though the downshifts take a little longer than what you would want, especially when you need a sudden burst of power. However, to take better control of the situation, you can always use the paddle shifters available behind the steering wheel. 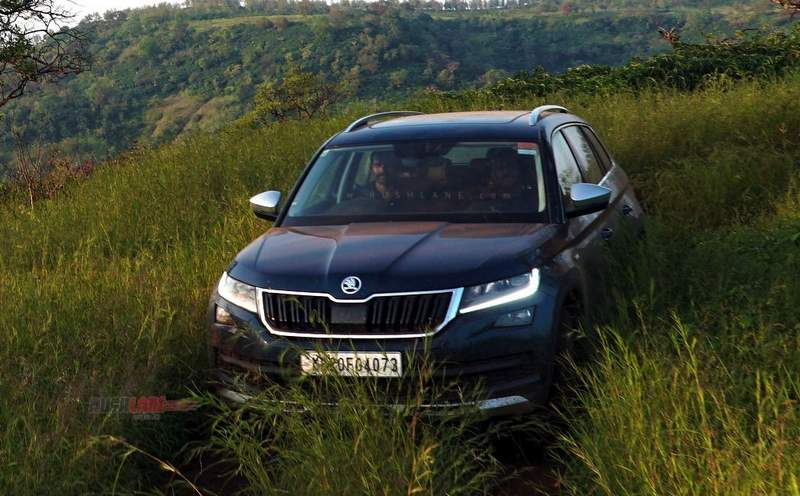 Driving Dynamics – As the Scout is built on a monocoque chassis, it lands up having brilliant driving dynamics when compared to its rivals. Suspension set-up is relatively firm and it sometimes affects the comfort levels when the SUV is tackling heavy undulations. However, on the brighter side, it also ensures that you don’t feel the typical body roll which is associated with SUVs of this size.

Steering is light and agile on slow speeds and weighs up aptly as speed starts to build up. 4-disc brakes perform their job well as per expectation. While we didn’t do heavy-off roading with the Scout, but some interior trails in the Pench Tiger Reserve ensured that we get to experience the capability of the Scout. The 4WD setup worked brilliantly and it worked out to be confidently reliable.

NVH & Safety – NVH levels are well contained in the cabin, except when you push the engine a little too hard. Once the motor goes past the 3,000-3,500 RPM mark, it becomes considerably audible inside the cabin. However, if you drive the car around with a lighter foot, it will be difficult for you to realize that you are actually commanding a 1.8 tonne tank which is doing triple digit speeds. Safety list on the Kodiaq is class-leading and it gets 9-airbags, ABS, ESC, ISOFIX seats, Fatigue alert system and a lot more. 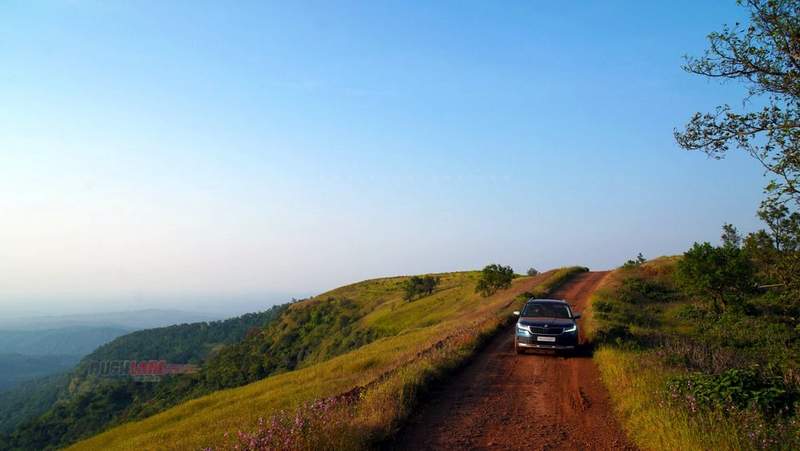 Verdict – To begin with, the Kodiaq in itself is a very capable car. It might not be as loud or majestic as a Fortuner or an Endeavor, but it is way more mature and elegant when compared to its body on frame rivals.

Till now, especially the L&K variant wasn’t a typical value for money deal. However, with the addition of the Scout, Skoda has introduced a better value-for-money package which also gets a little bit of additional SUV-character. The Scout shall appeal to anyone and everyone who is on a lookout for a classy all-round urban SUV (under INR 40 lakh) which can comfortably handle off-roading adventures on the weekends.

Disclaimer – For this review, Skoda India invited and hosted us at Nagpur. They paid for our travel, stay and food.