Mahindra has unveiled the new Thar SUV. Launch is set for October 2nd, which is when the bookings will also open. Based on a new platform, the 2020 Mahindra Thar is longer, wider and better in every manner, than its outgoing counterpart. Below are many more interesting details of the new Thar, which make it a thorough off-roader.

4×4 – Once launched, the 2020 Mahindra Thar will be the most affordable SUV with a 4WD system. It will get a 4WD system able to switch between ‘2-high’ (two-wheel-drive), ‘4-high’ and ‘4-low’ systems. In the ‘2 high’, the system disconnects the front axle completely allowing the Thar to be a complete RWD for better driving dynamics as well as improved fuel efficiency. In ‘4 high’ mode, torque is multiplied 2.48 times to allow the Thar to take on any obstacle. Crawl ratio is at 42:1 is available both in terms of petrol and diesel manual transmission variants.

Brilliant Off-Road Capability – Designed to be the best off-roader when it goes on sale in Indian market, the Thar gets 41.8 degree approach angle and 36.8 degree departure angle along with a 27 degree breakover angle. It sees ground clearance of 226mm and water wade facilities in 650mm depth. It also receives 33 percent traction as compared to its outgoing counterpart. Mechanical locking differential at the rear, braking locking differential on both axes, integrated Roll-Cage with 3 point seatbelts for passengers at the rear are also features that enhance its off-road capabilities. Off-roading capabilities of Thar are better explained in the video below, which was released by Mahindra.

Suspension – Other off-roading capabilities include Electromechanical Drivetrain Disconnect on its front axle allows it to be completely disconnected when in two wheel drive mode. This related to better fuel efficiency and higher speed. Mechanical Lock Rear Differentials allows for easy traction in challenging situations while both front and rear axles get Brake Locking Differential makes driving even on slippery surfaces easy applying brakes to free spinning wheels even when the 3rd and 4th wheels are spinning.

2020 Mahindra Thar is built for rugged roads. Powered by petrol and diesel engine choices, these include the 2.0L mStallion TGDi petrol engine and 2.2L mHawk Diesel engine. The petrol engine is capable of 150 hp power and 320 Nm torque while the diesel engine makers 130 hp power and 320 Nm torque. The engines are mated to a choice of 6 speed manual and 6 speed torque converter automatic transmission with 4×4 manual shift transfer case with low crawl ratio. 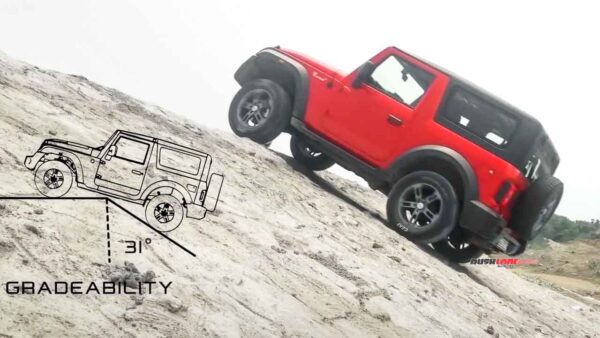 The petrol engine is indigenously developed. It is India’s first 350 bar direct injection petrol engine that comes in with compression ratio of 9.5:1 and offering peak power of 150 hp at 5,000 rpm and 320 Nm torque at 1,500-3,000 rpm. The engine gets double overhead camshafts with variable intake while advanced features include variable displacement oil pump and DLC coated piston pin.

What makes this engine stand apart is that its internal friction is reduced to the lowest possible levels. The engine is made up entirely of aluminum relating to a lighter weight. This reduced weight along with higher power output results in equitable power to weight ratio, better performance and lower emissions. 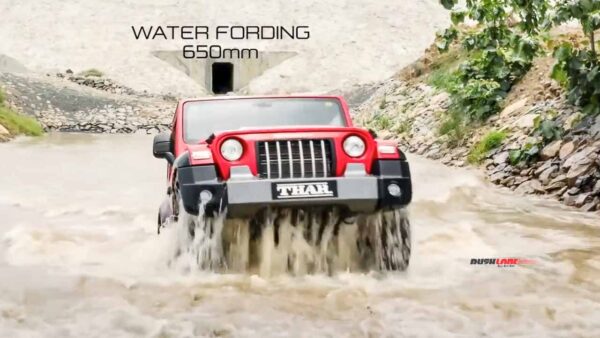 The aluminum crankcase is lighter but still highly capable of taking on extreme high firing pressures and better NVH refinement. This diesel engine is so designed to offer the world’s lowest internal friction while it also uses high end technologies like selective catalyst reduction and diesel particulate filter promising the cleanest exhaust emissions.

The Mahindra Thar will be available in two variants of AX (adventure variant) and LX (lifestyle variant). Prices will be revealed at launch, on 2nd October.