RUSHLANEDAILY AUTO NEWS
HomeBike ReviewsNew TVS Apache 160 Review - Does it have enough to be...

New TVS Apache 160 Review – Does it have enough to be the best?

Disclaimer – The manufacturer (TVS Motor Company) has blacklisted Rushlane from it’s events/rides as a consequence of decisions based on restrictive practices. The review is a firsthand experience report from the ride/study notes of Rushlane contributor/source.

RTR160 – The first RTR that was ever made. How did this come into existence one may ask, it’s fairly simple. TVS Racing took 1st gen Apache 150 and reworked on the engine, chassis, brakes and everything you can think of. What did we gain? The fastest, sportiest and sharpest motorcycle in the 150-160 cc segment. With 15.2 bhp power it was still the most powerful motorcycle in it’s segment until the Bajaj Pulsar NS 160 came out last year in 2017.

But guess what? It had been 10 years or more since it actually got any mechanical updates. Hats off to the engineers who designed this machine which could keep up with the competition for 10 long years, yet still it sells 25,000 units a month on an avg! Isn’t that amazing? During these 10 years though, the competition did mechanically get a lot of updates. Say for example the FZ got a V2 with Fuel Injection, the Gixxer got Fuel Injection with ABS and a lot more. 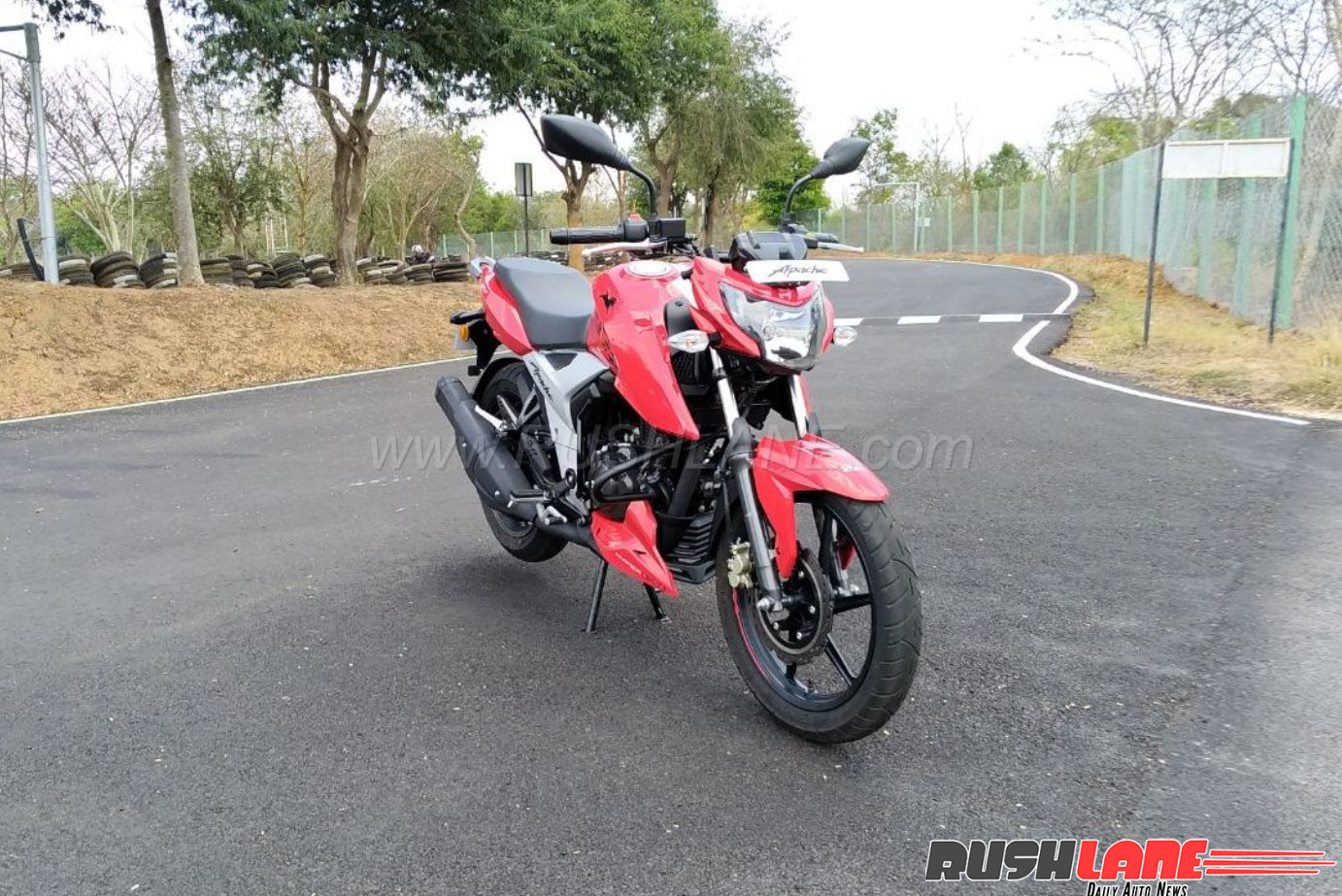 TVS needed to revive its Apache 160 brand to be the segment leader once again and unsurprisingly we all did know they would bring the 160 4V after the 200 4V, just that we did not know when? Comes March 2018 and TVS decides to unveil the all new RTR 160 4V. Everyone was excited as this was one of the sportiest motorcycles, and the new one obviously had to be better to keep the name up high on top. So did it? Keep reading.

Based on the Draken Concept, TVS lanched the Apache 200. And now based on the same design language, Apache 160 is launched. Compared to the Apache 200, the 160 is a little more subtle and commuter friendly. For example, 160 has a big flat seat, that is really appreciated in this segment. The front resembles the RTR 200 4V, it is only from the side that you start to realize that this is not the Apache 200. 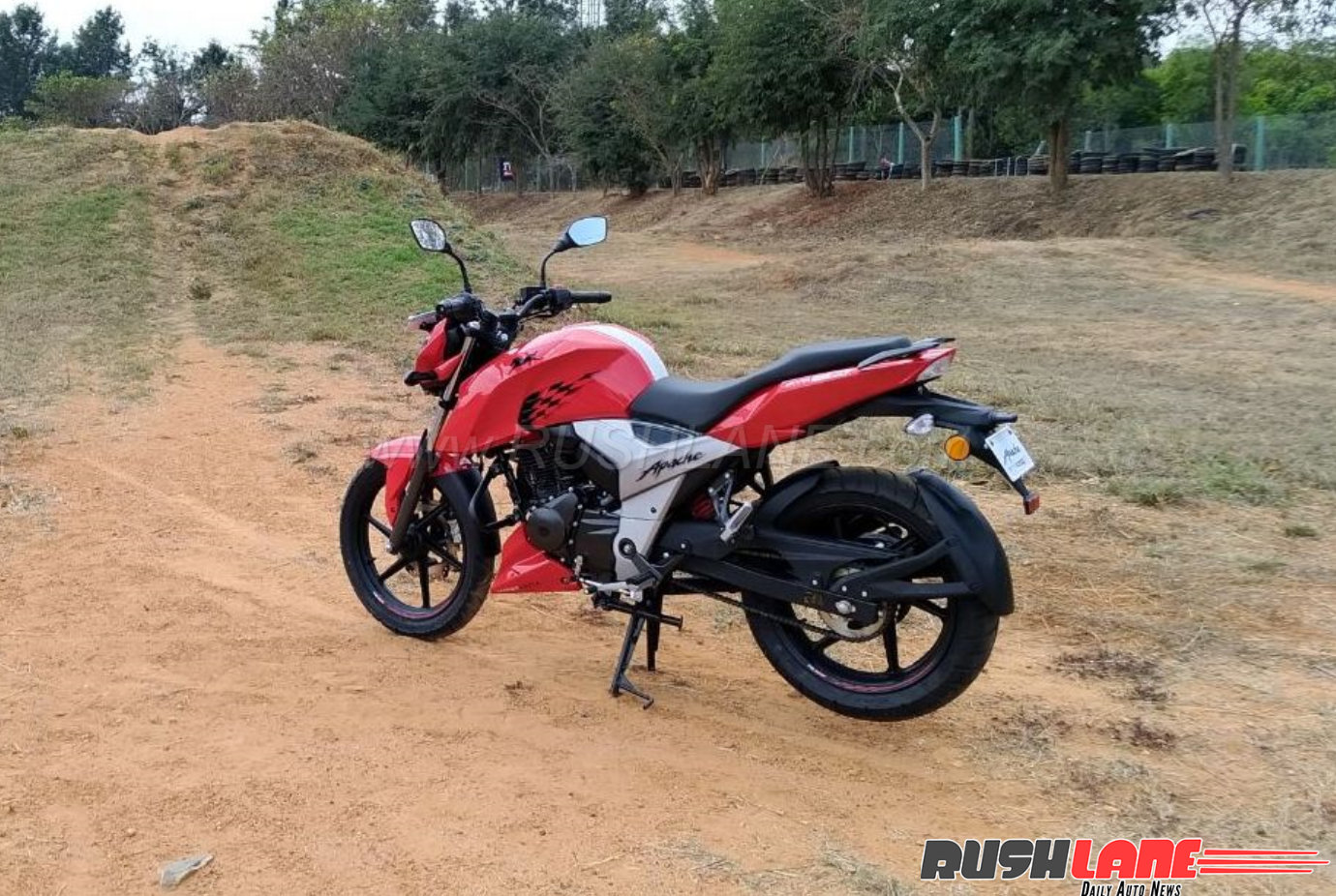 The rear subframe is lower, however TVS claims this chassis is 27% more rigid than any of the competitors. The lower subframe means lower seat height for the pillion and what a blessing that is! The lights are the same, the cluster as well. The seat and the rear panel are changed on the 160 4v as compared to the 200 4V.

Overall, the bike looks grown up, muscular and edgy. The fat rear tyre, unlike the Pulsar NS160 gives it a macho look. That definitely gives it a big bike feel and a more upmarket look.

The RTR 160 4V has the same bore and stroke (62mm X 52.9mm) as the older RTR 160. However this time the head is a 4V unit and the compression ratio has been bumped upto 10.15:1 now. The air and fuel is fed either with the help of carburetor or a new Bosch sources Fuel injection system. The power has substantially gone up to 16.8 PS for the FI and 16.5 PS for the carb variant, however the torque remains identical on both – 14.8 Nm. 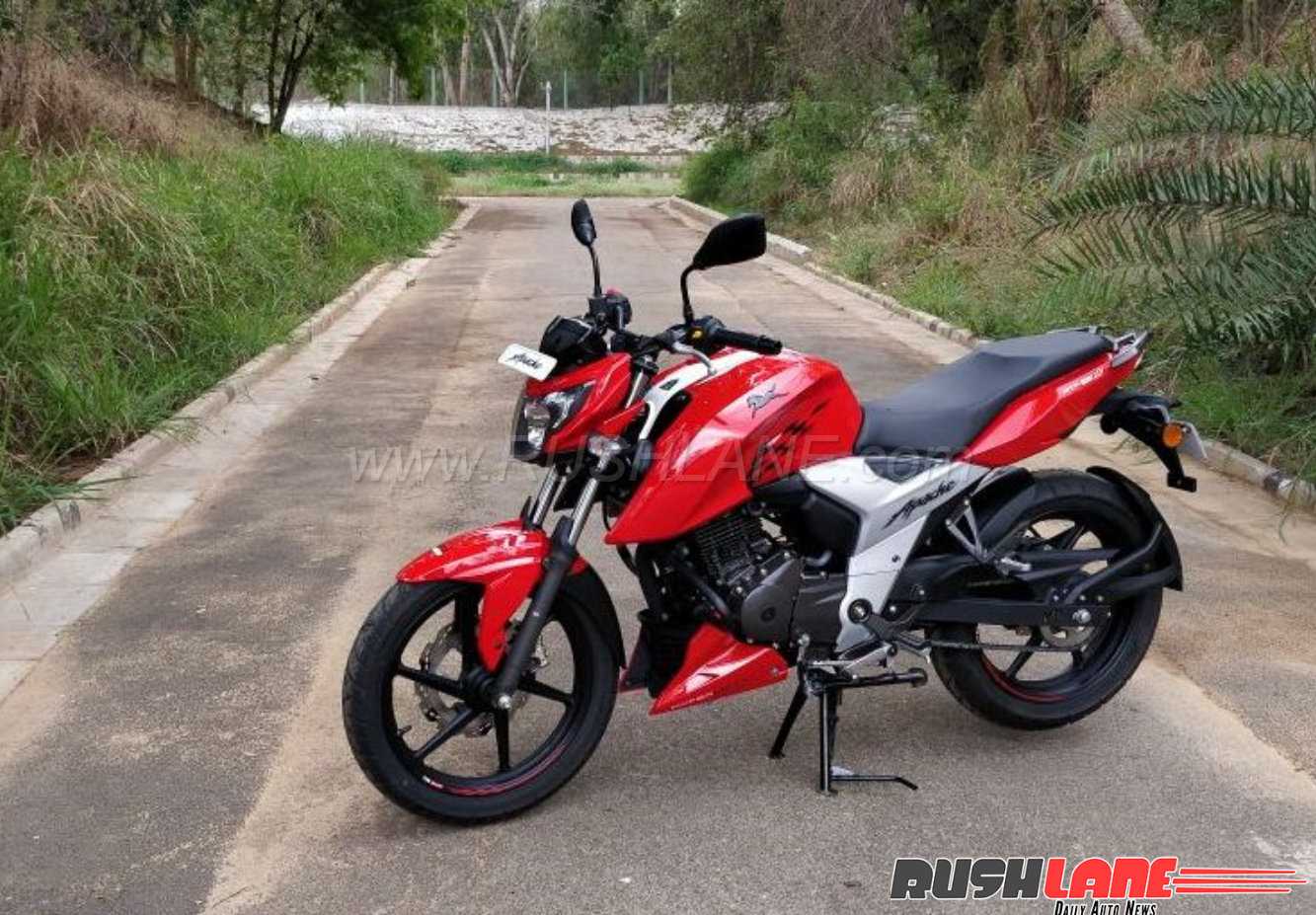 Now one may think the FI unit should be quicker here, right? But that’s not the case. The carb variant is actually faster to 60kmph and even to the 100kmph mark. The power delivery on the carb variant is punchy, while on the FI variant it is very linear. The refinement though is better on the FI variant. The engine also gets an oil cooler this time, which circulates and cools the engine oil. Obviously the cooler the engine runs, the better it performs. TVS claims they got all of these experiences from their racing division. 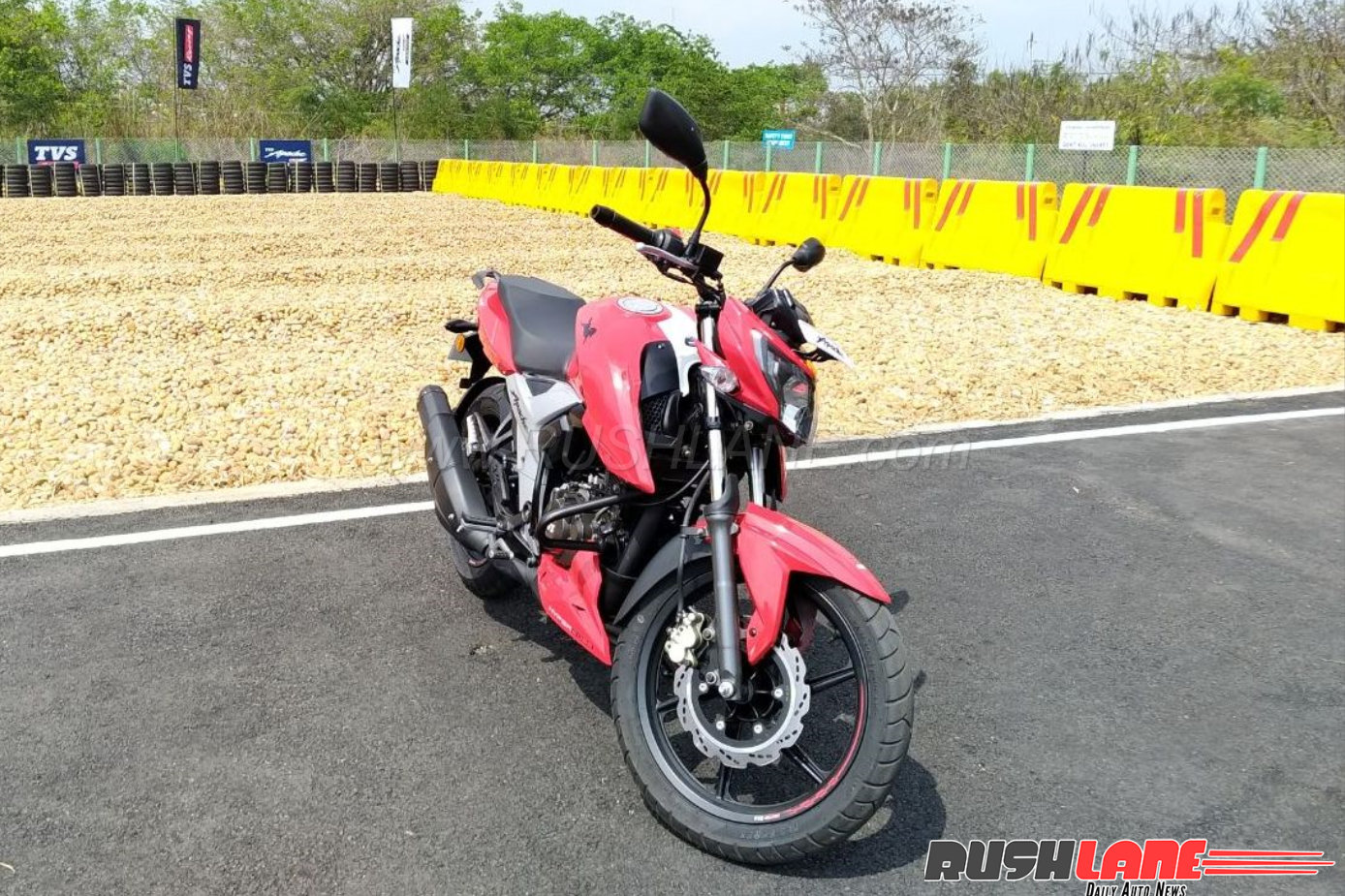 The RTR has the same setup of brakes carried over from the last generation 160. Same 270mm roto petal disc at the front and 200mm roto petal disc at the rear. The bite is good and so is the feedback, but then it wouldn’t hurt TVS to update this setup to a bigger front disc. It does the job, so that’s absolutely fine. Mind you, there’s no ABS on offer even as an option.The rear disc is the same unit used on the RTR160 Dual Disc variant and there’s nothing new here. It just works, nothing fancy here either.

Coming to the handling department, the RTR160 4V is the new segment benchmark. With the new single piece handlebar which is a nice departure from the low set clip on to the “Showa” made and tuned 33mm forks and monoshock. The handle is lower than that of the RTR200 4V and gives the bike more leverage in corners as well.

The new Showa tuned suspension is just phenomenal. The balance that it strikes is something all manufacturers should learn. The bike tips in the corner and remains really planted now, thanks to the 130 section tyres and the monoshock. The wheelbase also increased by 57mm which now stands at 1357mm. The foorpegs are set high, so they dont scrape either. 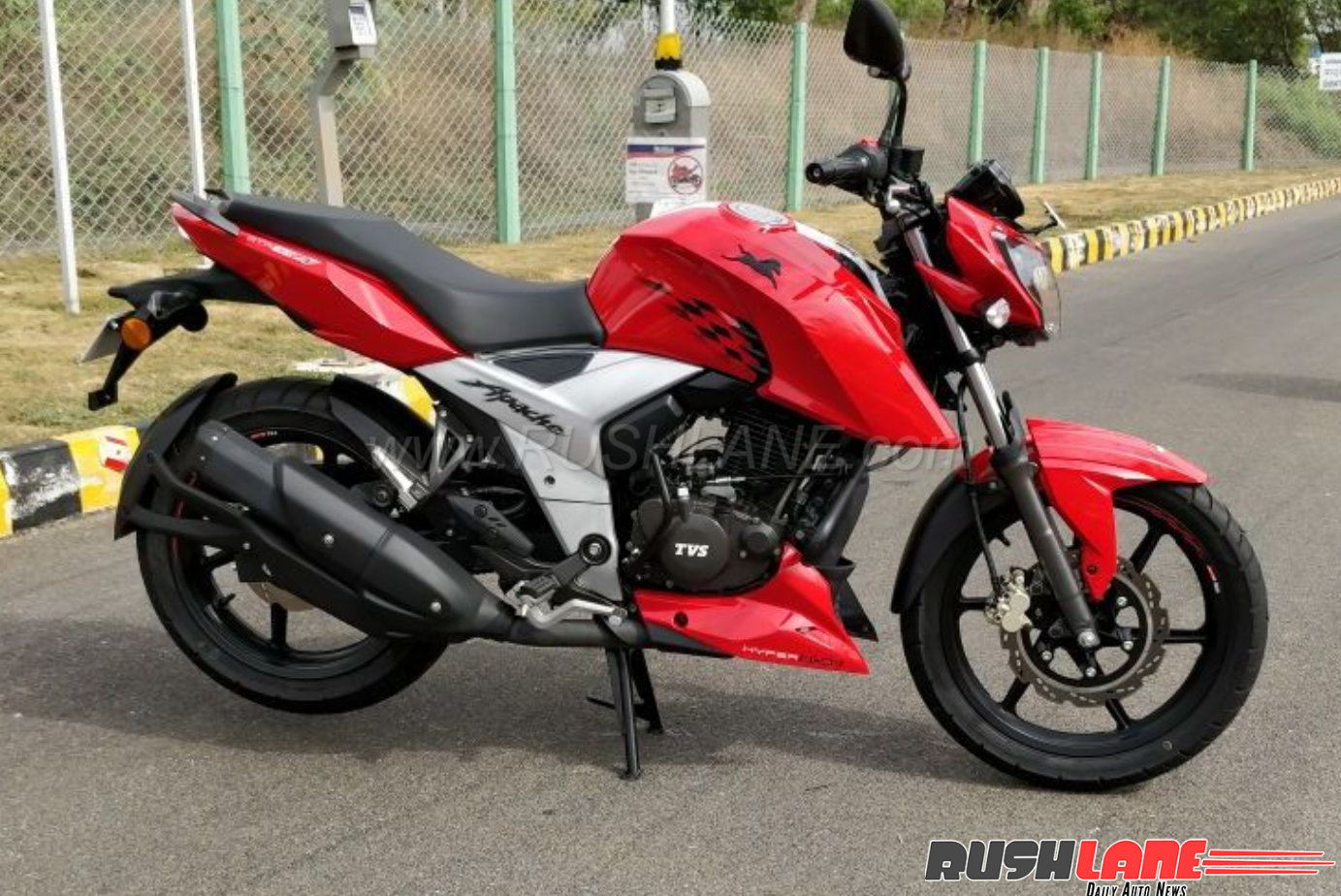 The new Apache 160 is an evolution rather than a revolution. The motorcycle lives upto it’s name and also overcomes it’s short comings of the previous generation motorcycle. The motorcycle is refined, easy to ride and mostly amazing to look at. We think these are the ingredients which make or break a motorcycle in this segment and this has definitely ticked the right boxes.

Apart from that here is the link to the Google Drive (which is still updating) – https://drive.google.com/open?id=1PgTuObO0DHkVPueJrO2KNcSSO9BGL26d