Approximately 3 years since its global debut, Nissan Kicks has finally arrived in India. However, it isn’t same as the one which is sold in global markets. This one has been modified and ‘Indian-ized’ for the target audience, Indians.

The car is longer than its global counterpart and actually shares the M0-platform with the Duster (same platform which underpins the Renault Captur). On the inside too, it gets some additional features like an 8-inch touchscreen infotainment unit which it misses out on in other markets. There are subtle design changes to the cladding etc. as well, which will majorly go unnoticed until and unless you use a magnifying lens to check for the details. So, let’s find out what the Kicks offers! 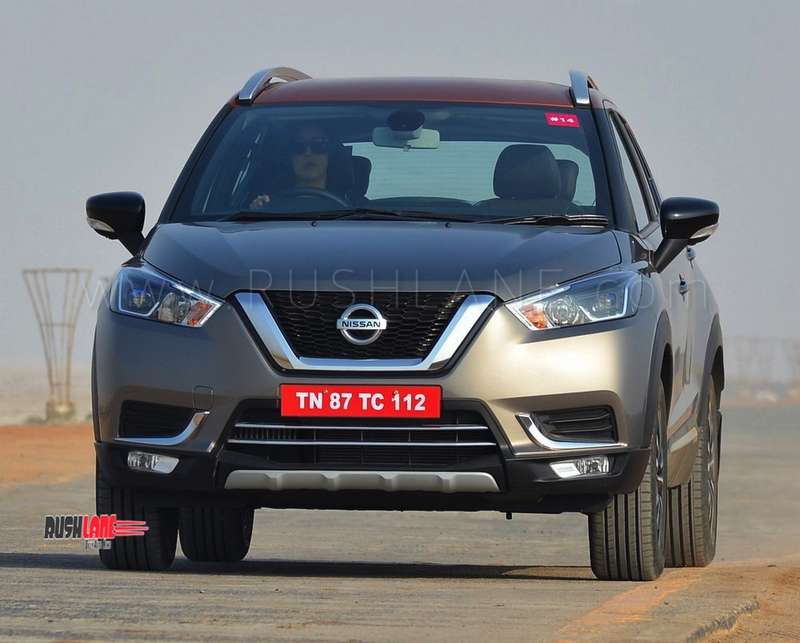 What Works (The Good) – Looks can be subjective but the Kicks looks pretty dynamic and young. Bright and bold color schemes further add to the overall youthful vibe which the design carries. Talking about the elements, there is a typical Nissan ‘V-Grille’ in the center and ample use of chrome at the front.

Headlight unit consists of a projector unit and a halogen lamp. DRLs and fog lamps are also present. From the side, a strong shoulder line is visible across the length of the car. Full marks to Nissan for introducing the 17” diamond-cut alloy wheels which look absolutely stunning! At the rear, the design is simple with boomerang inspired tail-lamps and a dual-tone bumper. 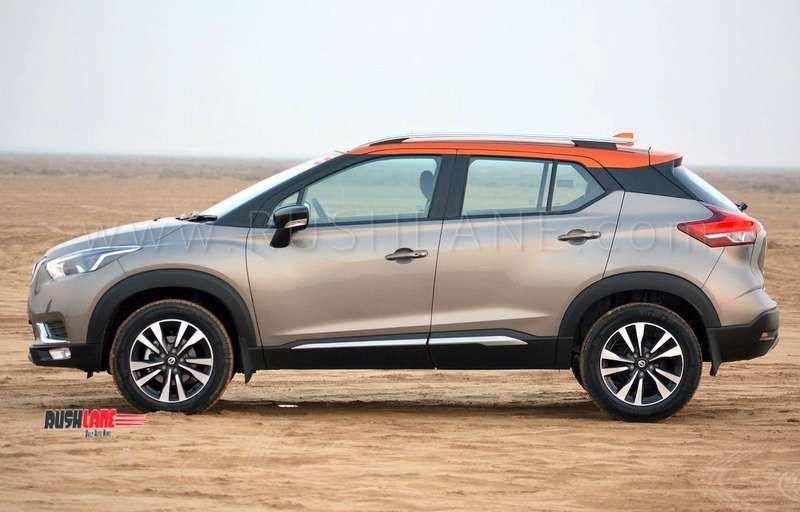 Step-in and you can notice that Nissan has tried to add a premium touch to the interiors by providing a leather wrapped dashboard and a segment-first 8” touchscreen infotainment system (which supports Apple CarPlay and Android Auto). FATC has been offered as standard across the range and there are rear-AC vents too for faster cooling in the second row. There are decent number of charging points and cup/bottle holders to take care of a family of 5 on a road trip.

We got a chance to spend time with the diesel version of the Kicks and it employs the tried and tested (1.5 litre K9K diesel motor which produces 110hp and 240 Nm of peak torque). The diesel-burner is mated to a 6-speed manual gearbox. The gearbox is slick shifting and the throws are well defined and short. The motor has a strong mid-range but isn’t reliable outside the 2000-3800 RPM marks.

One department where the Kicks definitely impresses is the Driving Dynamics. Potentially due to the long wheel base, the car is well composed even at triple digit speeds. Body roll is well contained and regular undulations on the tarmac are well absorbed by the suspension setup. The steering is a little heavy but overall maneuverability isn’t affected negatively. 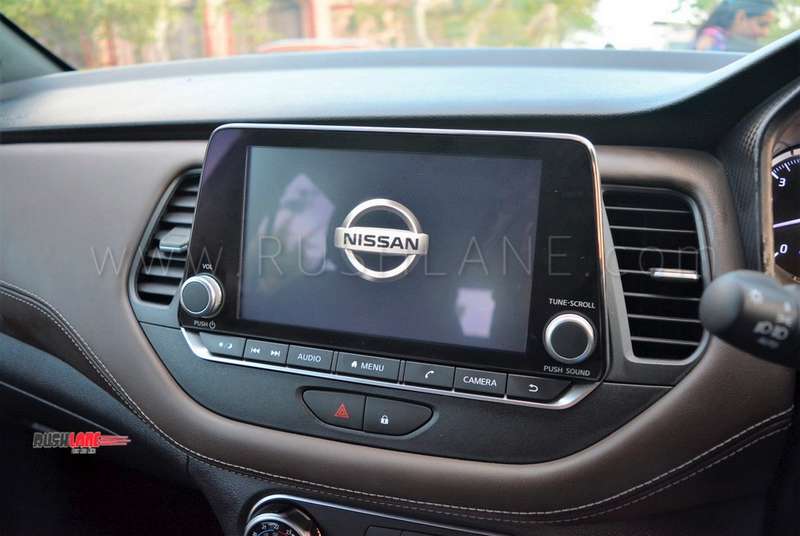 Other segment first feature which the Kicks comes along with is the 360-degree view monitor. It is a simple technology which employs 4 cameras and provides a real-time 360-degree top view of the car, which can come handy in tight parking spaces.

What Doesn’t (The Bad) – Though the car measures 4384mm, 114mm longer than the Creta and 69mm longer than the Duster, still the Kicks just doesn’t look long enough in appearance. Also, the fact that its front stance isn’t typical SUV-like further deteriorates its road presence, especially when being looked at in the rear-view mirror.

The dark themed interiors don’t give the cabin a roomy feel and instead makes it look smaller than it actually is. There is no sunroof on offer or else at least it could have brought in some airy feel in the cabin. Though the leather on the dashboard is good, the plastic quality at some places is questionable, considering a price-point of around Rs 14 lakhs. 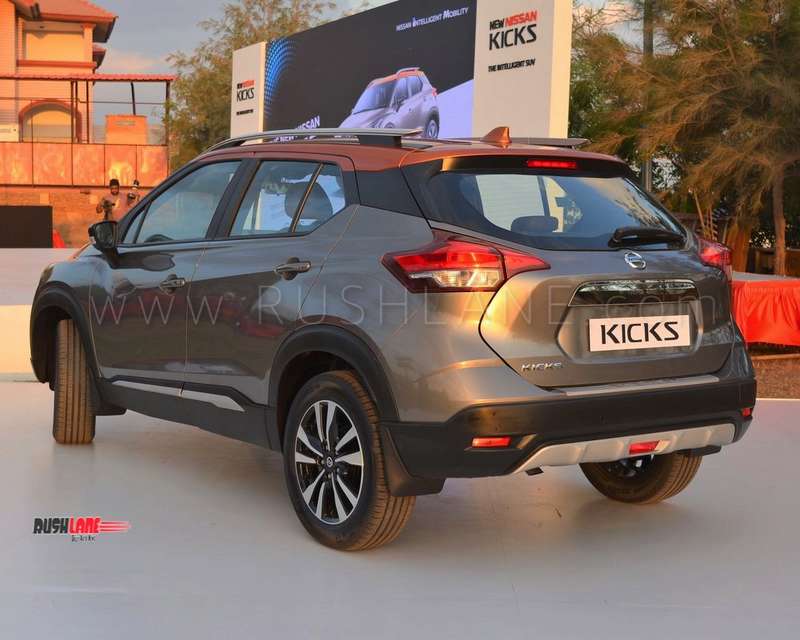 We found the steering wheel to be odd in design as it doesn’t use the space judiciously for the regular steering mounted controls. Instead, Nissan has introduced an additional lever (like a paddle shifter) which is supposed to be used for controlling the media input. A simple integration of all controls on the steering wheel would have made much more sense in our opinion.

Though the Kicks’ infotainment comes with class leading size and touch-response, its instrument cluster takes you back to the 2013-14 era. A TFT unit with some additional details was the least Nissan could have added to ensure that the Kicks justifies the ‘Premium’ tag it wants Kicks to be associated with.

The Kicks employs Disc brakes at the front and drums at the rear. However, the setup doesn’t seem to be powerful enough and you wish that there was more bite on offer. NVH levels aren’t exactly a deal breaker but simply put, there are quieter diesel cars in the segment.

It is easy to accept that there will be no AWD/4WD variant on offer however an Automatic or an AMT should have been available, at least with one fuel option. 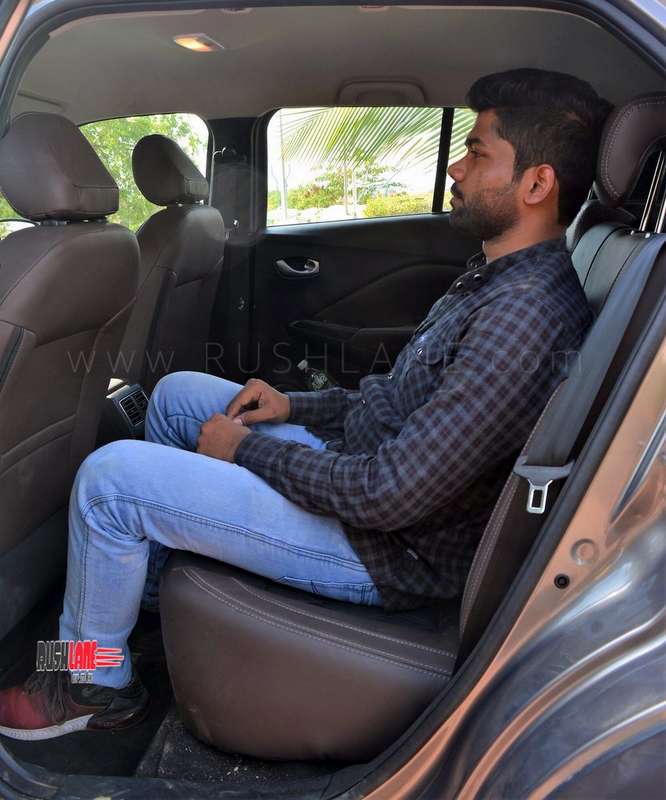 Bookings & Pricing: Nissan’s Dealers will officially start accepting bookings of the Kicks from 14th December’18. There is no official word on pricing as of yet, however we expect the pricing to be in the range of INR 11 – 14 lakhs. The car will be offered in two engine options, the 1.5-litre diesel we drove and a 1.5-litre petrol unit (mated to a 5-speed manual). There is no official word on the number of variants on offer at the moment. We will get more clarity closer to the launch.

Conclusion: The Kicks is a capable car however it seems a little outdated in 2019. The design might attract some, the diesel motor is decent (not outstanding though), driving dynamics are good and the feature list is acceptable. However, none of the elements make the car standout in a very cluttered segment. Nissan can pull-off a good trick by pricing the Kicks aggressively, but the question is, will it?

(Disclosure: For this review, Nissan invited and hosted us at Bhuj, and paid for our travel, hotel, and food.)