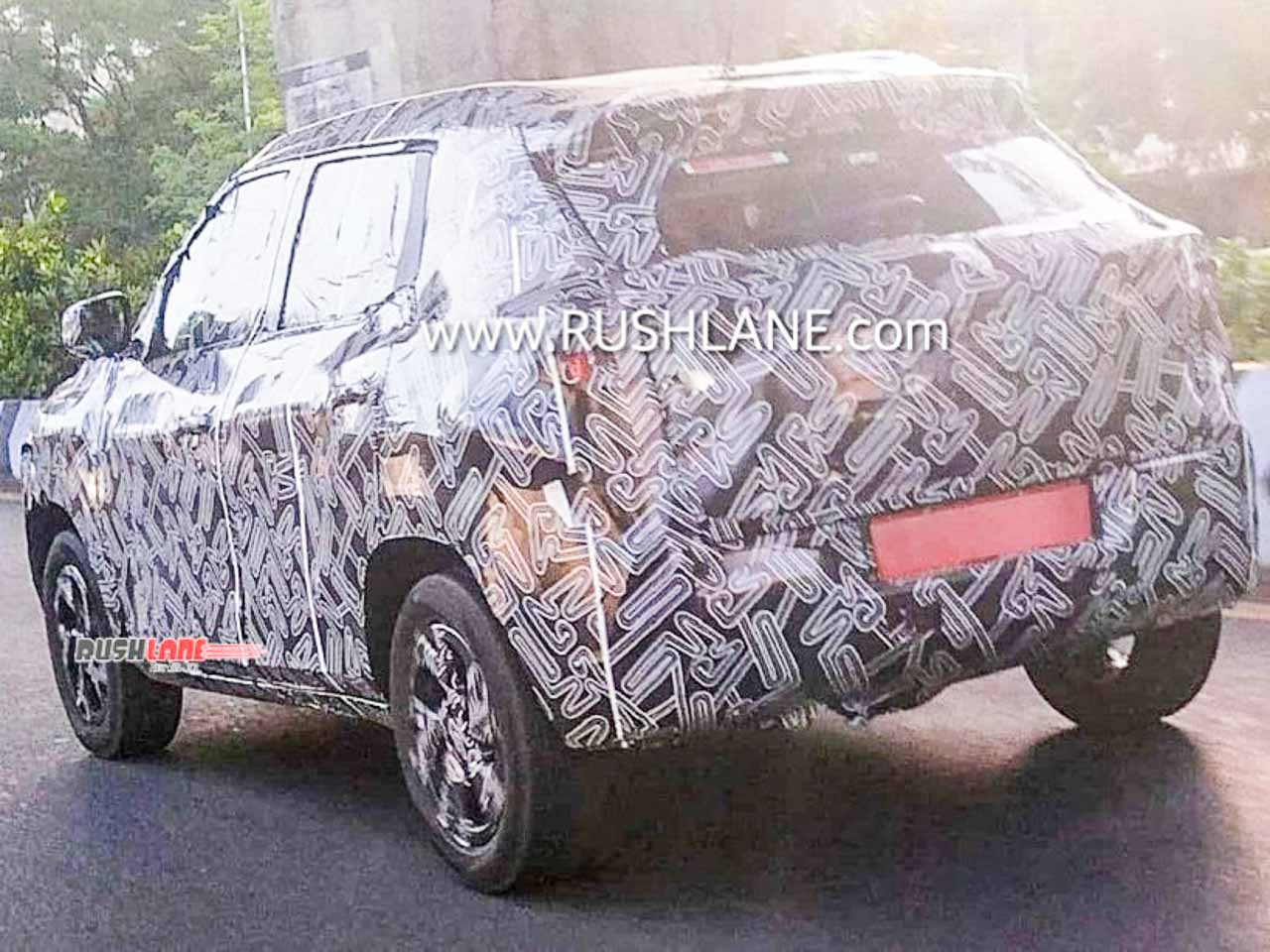 The sub 4 metre SUV segment has proven to be one of the fastest growing car segments in the country. Most major OEMs like Maruti, Hyundai, Mahindra, Tata & Ford already have at least one offering in the sub 4 metre compact SUV segment. As it is a good volume churner, other players like Kia, Nissan, Renault and Toyota too are now eyeing a share of the pie.

Nissan had earlier digitally revealed its upcoming sub 4 metre compact SUV, the Magnite as a concept. Now the same has been spied on test in production ready guise by automotive enthusiast Biji.

Like before, the test mule wore heavy camouflage however the new set of spyshots give us some additional details about the upcoming Magnite. For example, the previous time a Magnite test mule was spotted, it was most probably an entry/mid level variant however the one spotted now, seems to be a top of the line trim of the Magnite. It sported alloy wheels and a roof-integrated spoiler as well.

Nissan Magnite is based upon Renault Nissan’s CMF-A+ platform and will be a highly localized product. It will be sharing its platform and powertrain with the upcoming Renault Kiger. Most probably, the powertrain options will include a new 1 litre turbocharged petrol (90 hp & 150 Nm of torque) motor which will come mated to a 5-speed MT and a 6-speed CVT. We don’t think that neither Nissan nor Renault would be interested to bring in diesel variants of both the Magnite or Kiger.

The Magnite is expected to be a feature rich package. It would be facing heavy competition from cars like Hyundai Venue, Mahindra XUV300 (& upcoming Kia Sonet), which are known for their creature comfort features and connected car technology. Top-end Magnite shall mostly include a large touchscreen infotainment system, some connected-car tech, automatic climate control, powered front seats and much more. On the safety front, the Magnite shall mostly come equipped with ABS and dual front airbags, at least.

In a non-Covid world, Nissan would have wanted to launch the SUV around the festive season of 2020. However due to the ongoing pandemic, there is a high chance that Nissan would land up bringing the Magnite later in 2021 only.

Post launch, the Magnite will be competing with the likes of Maruti Suzuki Vitara Brezza, Hyundai Venue, Tata Nexon, Mahindra XUV300, Ford EcoSport and other upcoming SUVs like Kia Sonet, Renault Kiger and Toyota Urban Cruiser. Pricing of the Magnite is expected to be aggressive which could help Nissan draw customers to its showrooms. Currently, Nissan sells just two vehicles in India, the Kicks and the GT-R. With the launch of Magnite, Nissan would want to see its monthly sales numbers going up, and consistently clock sales in the 4-digit range.