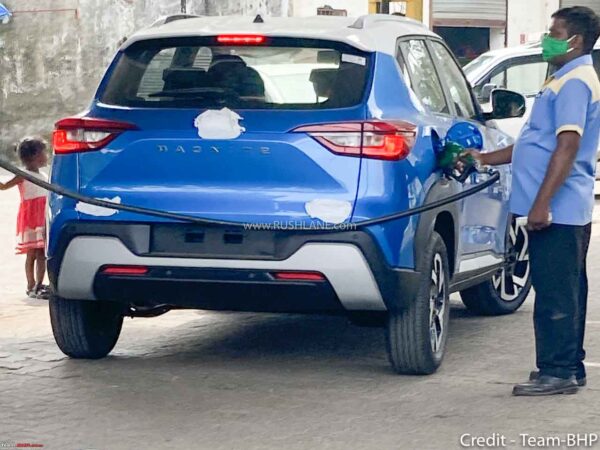 First ever undisguised photo of the new Nissan Magnite crossover, has been posted on the internet. Seen in a dual tone finish, the car does look attractive. For now, only this lone undisguised photo has been made available, thanks to TeamBHP member pankajn1702. Magnite will enter a highly competitive sub 4 meter compact crossover segment and positioned below the Kicks, will be the most affordable model in the company lineup.

Nissan Magnite was designed in Japan but caters to the demands of Indian customers in terms of design elements. It will be positioned on the Renault-Nissan CMF-A+ platform which it will share with the upcoming Renault Kiger. It will get a grille frame with vertical motion for enhanced rigidness, a set of sleek LED headlamps, L shaped DRLs and extended wheel arches and alloy wheels.

The Nissan Magnite seen above is wearing a similar colour, in which the Tata Nexon was first unveiled some years ago, at the Auto Expo as a concept. In addition, it has a white roof and stylish dual tone alloys. In addition, clearly visible are the protruding wheel arches with black cladding, silver accent on the rear bumper, silver accent on the sides too. Same is expected to be in the front too.

The broad shoulder line gives this small crossover a SUVish appeal. There are silver roofrails, floating roof with LED stop light and LED tail lights. At the rear, you can also notice the MAGNITE name embossed on the sheet metal itself. This looks like the top of the line trim. One can notice the adjustable rear seat headrest as well.

Interiors have not been revealed. But thanks to the design concept which was revealed earlier, expect the Magnite production spec interior to offer a wide and spacious appeal, further accentuated by a horizontal instrument panel, sporty air vents and mono-form front seats and rich cushioning for the seats at the rear.

The interiors of the Magnite will be done up in a black and red colour scheme with contrasting silver inserts on arm rests and central console. Infotainment will be via an 8 inch touchscreen infotainment system. Interiors will also feature a 360 degree camera, cruise control, push button start/stop system and automatic air conditioning, etc.

Nissan will be presenting the Magnite with a 1.0 liter petrol engine in two tunes, one of which will be a naturally aspirated unit offering 70 hp power and the other a turbocharged unit making 100 hp power. The engine will be mated to a manual gearbox and a CVT automatic.

Slated for launch sometime in early 2021, Nissan Magnite will enter a segment currently commanded by the likes of the Maruti Vitarra Brezza, Tata Nexon, Hyundai Venue, Mahindra XUV300, Ford EcoSport, Kia Sonet, Toyota Urban Cruiser and upcoming Renault Kiger. No pricing details have been revealed by the company as on date but a starting price from about Rs 6.5 lakhs is what is expected.

With the Nissan Magnite, this is the first time that Nissan has designed an UV for the Indian market and will sell it globally as well. The bold design and red colour scheme will make the Magnite attract a sporty segment of buyers in the country.

The Nissan Magnite, when it launches in India will be the company’s first new car launch after a period of two years. Sales in India have been not so encouraging with only 780 units sold in Sep 2020 as against 1,433 units sold in the same month of the previous year.