Considering only the domestic dispatch figures, Maruti Ciaz, Hyundai Verna and Honda City leave their competition far behind. However, the big picture, once the export figures are added, looks completely different.

For instance, the Nissan Sunny which only clocked 53 units last month in domestic market topped the export chart in its segment. The sedan outperformed both Maruti Ciaz and City when it comes to net dispatch.

Last month, 1,738 units of the Hyundai Verna were dispatched for the domestic market and 5,297 units were shipped abroad. This puts it at the top spot in overall sales with 7,035 units. The Nissan Sunny may not be featuring in most sedan buyers’ shortlist anymore but it seems to have a sizable demand in export markets. 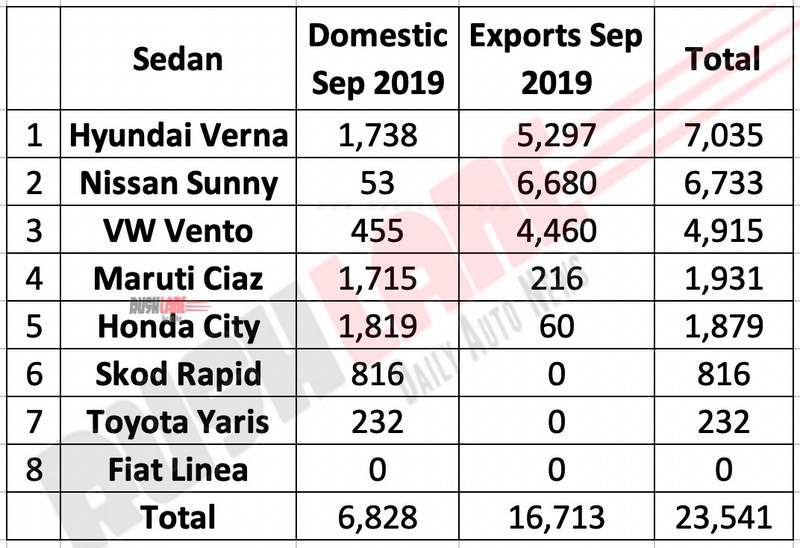 No wonder the company continues to keep the product alive. In fact, the Sunny is the best selling product for the Renault-Nissan Alliance’s Oragadam plant!

The VW Vento which has been posting lack luster sales in the domestic market for several months now has a better prospect in export markets. In September 2019, the Polo-based sedan managed to clock net sales of 4,915 units of which domestic market accounted only for 455 units.

With very limited number of export markets, Maruti Ciaz finds itself in the fourth spot in overall sales with 1,931 units despite being one of the segment leaders locally. Only 216 units of India-made Ciaz crossed the borders last month.

The segment leader Honda City clocked 1,819 units in domestic market but its export amounted to mere 60 units. The Skoda Rapid and Toyota Yaris are made exclusively for India and hence find themselves at bottom of the chart.

With the recent reforms by the government in the field of automotive crash safety and emission norms, the made-in-India cars are nearly at par with international standards. This would mean, the difference in domestic market-spec and export-spec variants of a model would be minimal. These recent changes are likely to encourage automakers with ample production capacity in India to explore more export markets.

In addition to improving capacity utilization, ramping up export operations would derisk the Indian operations from a slowdown like the ongoing one.