It all started while we were returning home from Bengaluru airport, this guy firstly closed the mobile data and took us through a wrong route, when we tried questioning him he said this is the only route from airport, we have to tell him that we are not tourist and know the way but seeing the sensitivity of the vacant road we decided not to say much.

As we reached the main road he started driving really fast and was continuously on a phone call (he was not using ear phone was talking directly on the phone) when my husband Sachin Khurana tried telling him to slow down and either put the phone down or park aside and complete his conversation, he initially totally ignored what we were saying but when we again told him the same thing he blasted on us but again we kept quite as he had to put the phone down and especially when you are travelling with kids you actually dont want to engage in any hassle. 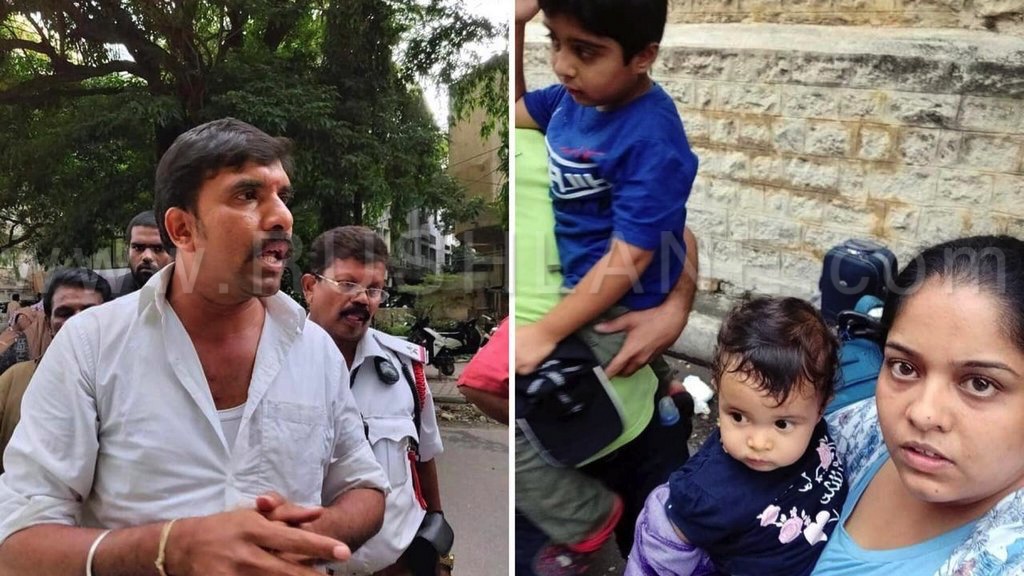 We moved little ahead and asked him to stop the car wherever he can so that we can change our infant daughter’s diaper. Meanwhile he switched off the AC while the car was still moving and when we asked him to switch it on till the time he gets a place to park to which he started abusing us badly. he said ‘ab tumko mae batata hu’, he stopped the car and the ride in between asked us to get out of the car in the middle of nowhere, he forcefully started taking out our luggage from the car, i ran to the nearby traffic policeman for help and when Sachin tried stopping him from throwing our luggage he starting physically attacking him, hold his collar and started hitting him. All this happened in the presence of 3 traffic policemen and general public. All of them were talking in local language and we were not able to understand what exactly he was explaining to the traffic policemen. Seeing this scary situation my 5yr old son and infant daughter started howling and crying out of fear.

We immediately tried calling the police as meanwhile it started raining soo heavily, in the middle of nowhere when Ur kids are crying and you are been threatened by a cab driver that ‘mere union wale tujhe aur tere parivar ko dekh lenge’ what are we suppose to do if we are new to the city.

Anyhow i took the shelter inside a showroom and my husband went to the police station to file a complaint. It was not a surprise for us when we were told the matter is between you and ola and police can’t do anything in between. Some man harass you, physically abuse you, threaten you and its of no importance to police.

We have filed a police complaint against the driver. When all this was happening i was actually googling ola cab call centre no. There are no shortcuts to call these guys. It actually took so much to read through so many tabs wherein finally i got the option of call us. The call centre voiceover lady will keep you waiting till the time they are free to talk to you, thats the last thing you can expect at the time of distress. Holding kids for 2hrs, tired and tense finally when i had asked ola call centre guy to book the cab because of repeated cancellations they are asking me ‘Mam befor i can do your booking i would like to know how would will you be making the payment cash or ola money’ As in are you serious, I have just experienced worse thing and you inspite of knowing everything asking me about the Payment mode.

After 6 cancellations and 2.5hrs of wait wherein my kids were cranky and crying bcz of hunger and tiredness we finally managed to get a cab and are back home. We talk about digitalisation, progress, women empowerment blaa blaa if the citizens cant get the basic safety all these jargons are of no use otherwise.

A) Cant we have an easy access to contact Ola / police on the app, why do i need to dig out different sections just to find the option of ‘call us’. In the ola app. As the driver stopped the journey mid way the SOS button was also gone, what do you expect the passengers to do in such case. Finally when i managed to speak to #OlaCabs they are asking me to email the photographs and all evidences, i mean are you serious!! God forbid if i would have been travelling alone i would have protected myself or would have struggle to put a email to you guys.

B) Can we have a easy access of sending photos, videos etc. Over WhatsApp or any other similar app to cab authorities, expecting a mail at time of an emergency seems to be a joke to me.

C) Inspite of the presence of traffic police and general public as eyewitnesses what was the need of taking my husband to police station leaving behind two small kids and me. Nobody was bothered that we are left alone in middle of nowhere (with lots of luggage) that too when it was raining heavily, cant the initial complaint be launched at that moment only, we understand that few things requires paperwork but what how can be the protectors of the Nation not bothered about the kids who were crying out of terror and fear.

D) #Ola guys though followed up later and assuring that they will blacklist the driver but when we asked to give us in writing they refused.

E) The driver openly threatened us and the kids, what about our safety, neither we got help from police nor anyone helped us.