Prior to auction, the Police Commissioner has issued an order seeking objection or ownership of these abandoned vehicles

There are as many as 2,391 abandoned and unclaimed vehicles lying with the Hyderabad Police. They are of varying types and makes and now the police seek to dispose around 175 of these vehicles via public auction.

The Police Commissioner of Basheerbagh, Anjani Kumar has issued a order asking persons if they have any objection or can claim ownership interest in any of these vehicles. These persons can file an application before the police and claim the vehicle within a period of 6 months from date of issue of notice.

Getting rid of abandoned or unclaimed vehicles by way of public auction is permitted under Section 7 of Hyderabad Metropolitan Area Police Act 2004 r/w Sec 40 of Hyderabad City Police Act. Failing such claims, the vehicles will be auctioned.

The particulars of these vehicles are available with I Narasimha Murty – Reserve Sub-Inspector of Police City Training Center. He can be contacted on phone number 9490616637 and via the Hyderabad Police www.hyderabadpolice.gov.in

The list of vehicles to be auctioned includes two wheelers among which are a large number of Honda Activa, Hero Splendor, Passion Pro, Bajaj Discover, TVS Wego, Apache and Honda Unicorn. The list also includes some auto rickshaws.

The list gives the number of the vehicle, its engine and chassis number and the police station where the owners of these vehicles can approach in case they want to claim the vehicle within the stipulated period prior to auction.

There are open areas near many Regional Transport Offices where these vehicles have been piling up. They not only occupy space but are rusting due to neglect as the owners prefer not to stake claim even after cases against them have been settled.

These vehicles which consist of two wheelers and auto rickshaws, cannot be piled up indefinitely. The Police have been empowered to dispose off these vehicles, which have been impounded either due to some accident or some other crime, from time to time via public auction after giving the owners sufficient notice to claim them. 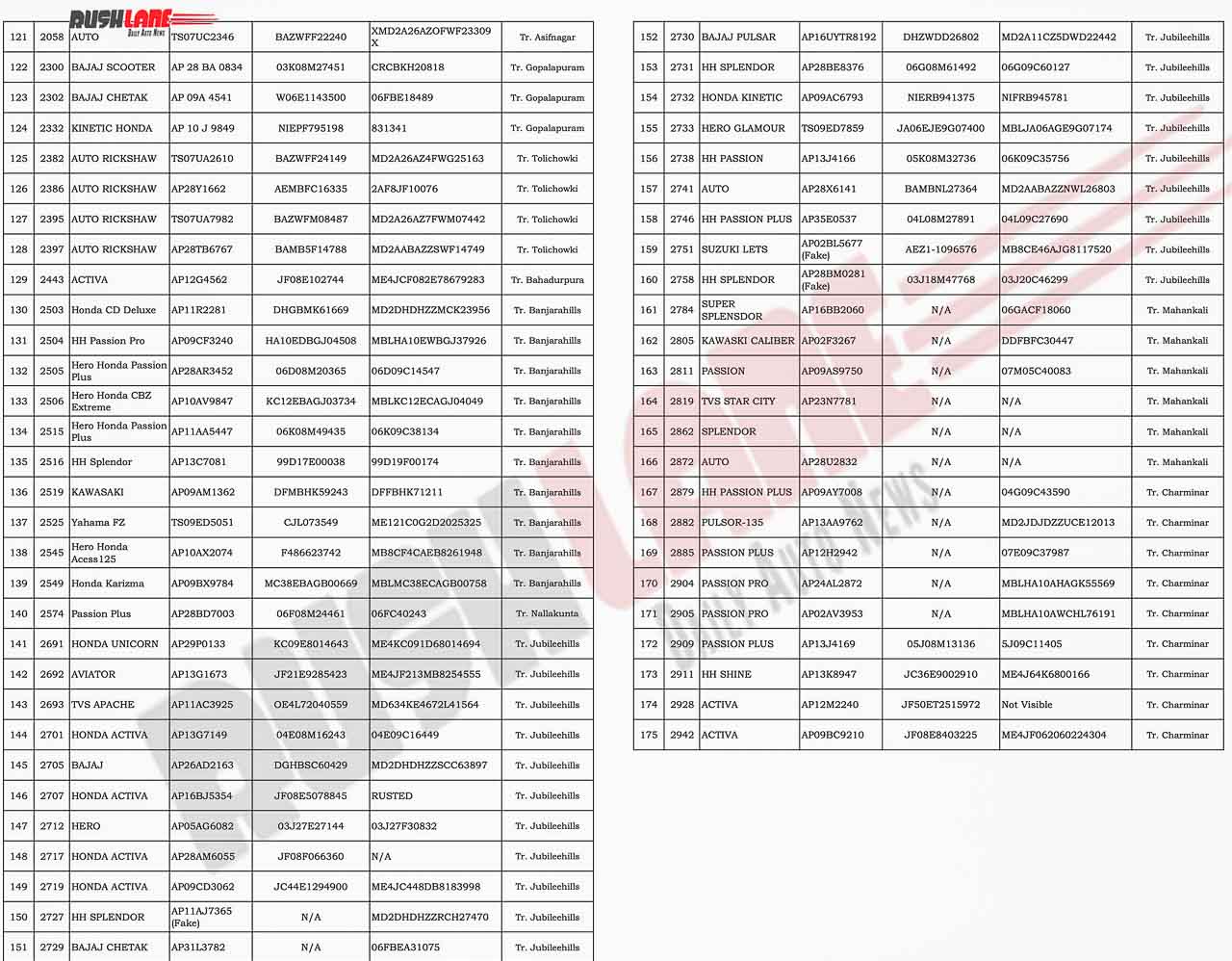 Help by Pune Based NGO

The burden of unclaimed or abandoned vehicles is seen across the country. Similarly in Mumbai too, the Police have noted piling stocks of abandoned and unclaimed vehicles. The Mumbai Police lead by Joint Commissioner of Police Vishwas Nangre Patil has joined hands with a Pune based NGO Gangamata Wahan Shodh Sanstha to help in clearing these vehicle by tracing its owners.

The NGO has been successful in a similar effort conducted in Nasik and disposed off 2,000 vehicles they found and approached the owners of these abandoned vehicles, asked them to claim their vehicles but found that the owners were reluctant for various reasons. The NGO works with the Police to acquire an NOC from the owner to sell the vehicle off as scrap or via public auction while the proceeds therefrom will go to the Government.